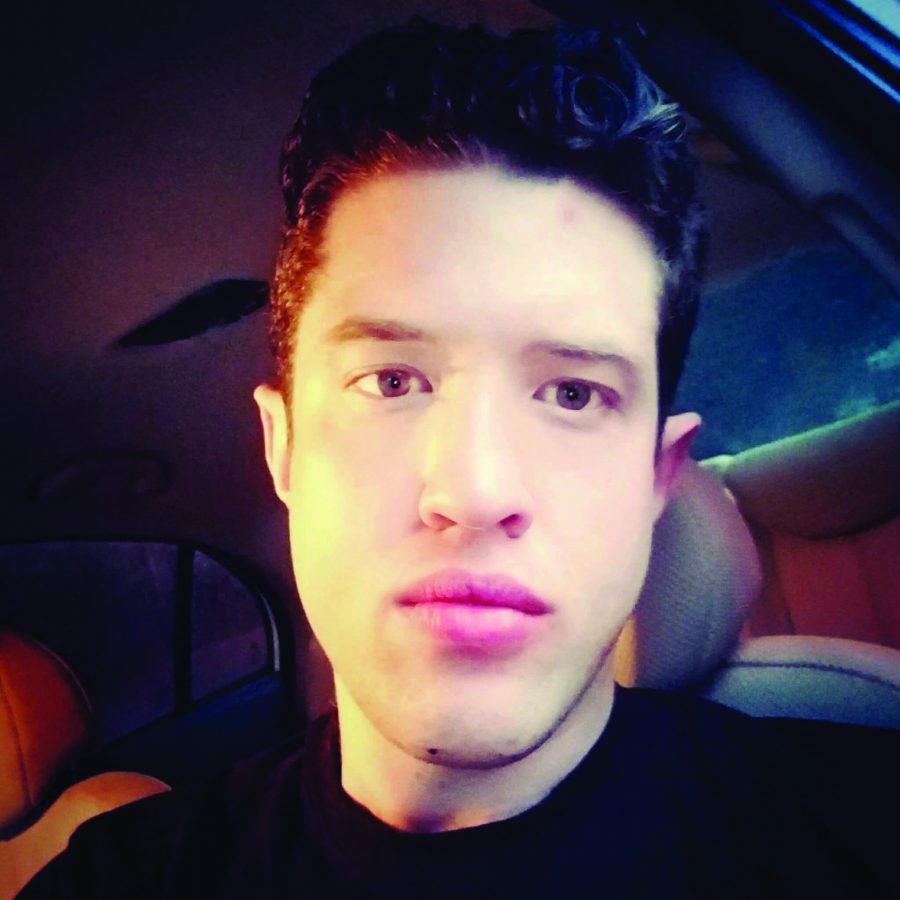 When former UTSA student Alfred MacDonald guests on Tucker Carlson Tonight soon, he’ll be discussing with the show’s namesake why he transferred out of UTSA after just one graduate semester. MacDonald’s story, which gained the attention of news outlets across the country, acclaimed ethologist Richard Dawkins and Fox News commentator Robert Spencer, concerns events that happened just over a year ago. But the 29 year old philosophy student has reignited the discussion of the extent of free speech on campus.

Last fall, MacDonald, then a philosophy graduate student at UTSA, was contacted by the philosophy and classics department chair Dr. Eve Browning. “We need to meet to discuss some behavioral concerns,” she said in an email to MacDonald dated Sept. 24 of last year. MacDonald thought she requested they meet to discuss his tardiness and absences in class.

However, Browning wanted to meet with MacDonald to discuss a comment he made in an out-of-class discussion between him and another student. The conversation between MacDonald and the student happened a short time beforehand.

“The conversation (between the student and me) was for at least 30 minutes, and in the first five minutes, we were talking about professors’ grading styles and their religious leanings, because I wanted to take a philosophy of religion course and was wondering if anyone would be biased against me if I took this course,” MacDonald said.

The student mentioned she was Christian and did not experience any bias from the professors she had taken courses with, then mentioned her fiance was Muslim. MacDonald then commented that he did not think highly of Islam because of some countries’ capital punishment of homosexuality. MacDonald is bisexual.

“The context was in religious leanings and ideas. We were talking about ideas and she mentioned a person. A person is not an idea, therefore, I commented on religion.”

MacDonald says the tone of the comment was not antagonistic and that the student didn’t react to his comment.

MacDonald eventually transferred out of UTSA to Texas State University’s graduate philosophy program. He decided to leave almost immediately after his meeting with Browning.

made life way harder for me. I’m still getting used to reading the comments in a news article with three hundred people calling me an ‘egotistical narcissist.’

“If it happened in the middle of last semester, on top of classes and everything else, there’s a high chance I would’ve messed up one thing or another and potentially be in a worse scenario.”

MacDonald then sent the recording to several news outlets and organizations, including the Foundation for Individual Rights in Education (FIRE) and Turning Point USA. MacDonald eventually abridged the recording to a six-minute audio clip with accompanying transcript and posted the recordings to YouTube, then to Reddit, where the post gained publicity.

“I didn’t expect for it to get as much attention as it has gotten,” Macdonald said.

The subject matter of the recording comes at a time where Muslim relations in the United States are tentious. Ammar Musa, the education chair of the Muslim Student Association of UTSA, says that similar comments are often addressed on campus during their organization’s tablings.

“A lot of the curiosity can be resolved when we say there’s a distinction between what cultures do and what the religion (of Islam) teaches,” Musa said.

With the publicity came several criticisms towards MacDonald, Browning and UTSA. Browning, in a statement provided to the Paisano, believes she is being unfairly represented in the incident.

“This is a very dishonest campaign that is tapping into some of the worst facets of our moment in history: white supremacy, misogyny, Islamophobia, racism, violent rape-and-murder rhetoric, skepticism about higher education, alt-right ideology and gullibility about internet ‘information.’

“Literally nothing about the events that which are the tangential occasion of this dishonest campaign has anything to do with freedom of speech, particular views being suppressed, censorship or any other violation of our university’s core principles and my own unswerving commitment to free and open dialogue. It consists of falsehoods being used to hurt people.  And by people, I mean myself, my family who have been threatened, my innocent pets and my old horse (who was threatened with rape and decapitation), co-workers, my department admins who have been harassed and bullied and our beloved UTSA.

“But UTSA is a strong and vibrant community, and we have received heartwarming  support from many people who matter a great deal to us: some local, some national and international.  Many complete strangers have emailed me to say they are sorry for what is going on and to keep strong.  UTSA’s administration is developing policies to deal with internet harassment campaigns, and I am confident that we will all be better prepared for this sort of toxic intended disruption, going forward.”

Browning said she could not comment specifically on what was said during her and MacDonald’s meeting because of the conversation’s protection under the Family Educational Rights and Privacy Act (FERPA).

MacDonald believes that Browning’s concerns were counterintuitive to his learning environment.

“Restricting my education does impede my education, because when (Browning) said I couldn’t make derogatory comments, well, what is a derogatory comment? So, I really only had two options: hope that everything I say fits within the guidelines, or ask people all the time if what I’m saying is okay to say,” MacDonald said.

Dr. Joshua Thurow, associate professor of philosophy, says open discourse is imperative to the philosophy discipline, even if it’s questioning the widely-believed and the taboo.

“One of the things we as philosophers think we can contribute to the public is this discipline of being able to question things that we hold and evaluate those arguments in a way that’s respectful of people who disagree,” Thurow said. “I think students, and the general public, have been dealt a disservice on how we have, as a nation, represented what dialogue and debate look like.

“If we can help students to do that a little better, we could maybe provide some good examples of what it looks like so the general public dialogue as a nation could be more productive.”

MacDonald believes the institutional core of a university is threatened because of this incident, and that is why he wanted to present the incident to news media.

“(Universities) are the only place where you can get a lot of people together and challenge their beliefs in a mass setting, and that’s really important because we live in a democracy,” MacDonald said. “Even a possible restriction is sufficient to thought suppression. (Browning) didn’t have to take action against me, but even suggesting that it take place made me consider all the things I couldn’t say.”

MacDonald recorded his meeting with Browning unbeknownst to her. Under Texas’ one-party consent recording law, this was legal. During the meeting, Browning suggested that MacDonald meet with the Behavioral Intervention Team (BIT) mentioned his behavior would not be tolerated within the department, and his comment could lead to academic dismissal. Browning also said if MacDonald were an employee of hers that he would be fired for the same behavior.
“I could’ve been totally wrong, but this is still something she should definitely not have done,” MacDonald said. “I think she should be fired, and if she isn’t fired, I don’t think she should be chair. I don’t think someone like that should be structuring people’s education.”
MacDonald also says that Browning’s claim that a certain professor’s complaint against him is unsubstantiated, saying he did not have this professor for a class.

“(The Behavioral Intervention Team) is not about taking punitive action or determining penalties,” Joe Izbrand, associate vice president of communications and marketing, said in an interview with The College Fix. “The Behavioral Intervention Team is comprised of a broad array of professionals whose job is to review concerns that come to them and to appropriately determine if any kind of follow up is necessary—concerns about the wellbeing of a student, if the student has expressed a threat to another student or themselves.”

He continued, “We do not and will not take disciplinary action for students exercising their freedom of speech rights, we expect faculty to help guide students in how to appropriately express those views when interacting with each other.”

Director of Student Conduct and Community Standards and Co-Chair on the Behavioral Intervention Team Anne L. Jimenez said the BIT is used to “address faculty, staff and student behaviors that are concerning.” Jimenez says the initiative is not used as a tool to dismiss students. It instead acts as a central reporting mechanism for various student, faculty and staff complaints, where they are outsourced to the appropriate departments, often to the Student Conduct and Community Standards.

“If a student’s behavior is going to rise to the level of a sanction being issued, or finding of a violation, then administrative due process is ensured for that student,” Jimenez said.

“Our job is to investigate objectively to make sure we know what the behavior is, and once we understand that, we’ll look at the code and see if there’s a violation, because sometimes there’s not.

“In other words, it’s not a violation of the student code to be a jerk, or to be non-civil.”

MacDonald transcribed the interview, nearly thirty minutes long, in its entirety, with plans to send the recording to media outlets.

“I wanted to wait until I transferred out of (Browning’s) influence,” MacDonald said. “Because if I didn’t, that would’ve