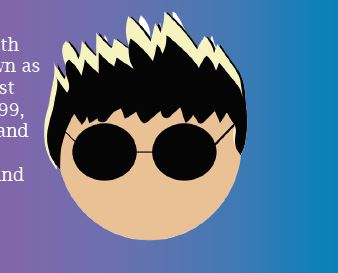 The ‘90s were a beloved decade of grungy jeans, combat boots and strappy dresses. The decade was also filled with trends we hoped never would make a comeback until now. Here lie the bad trends of the ’90s and their revamped looks.

While many heartthrobs rocked this cut in the ‘90s (Matt Damon, Leonardo DiCaprio, Jim Carrey. Most non-Oscar winning young men could not pull off the look. Even though the men of the ’90s dominated this hairdo, females in 2017 took on the bowl cut. A modern bowl cut is a cute, chic pixie cut for women. Men modernized this look by majestically sweeping their hair to the side (aka 2009 Justin Bieber).

Whether you used a crimper or just left your braids in overnight, if you rocked crimped hair in the ‘90s, you were way cool. This frizzy ‘do was worn by lots of girls for pretty much any kind of occasion. Because when is crimped hair not appropriate? Today, beach waves are the new crimped hair (minus the frizz). It’s easy, casual and trendy.

Applying a dark lip liner and light lipstick was a staple in ‘90s makeup routine. Although this ill-fated trend never made it past 2002, a modernized rendition has recently come to vogue. An ombre lip features a dark liner slowly fading to a lighter shade on the inner lips. This trendy new lip style has brought back an improved dark liner, light lip look.

The guys decided to step into a hair game with this trend. Bleaching the tips of a spiked ‘do known as frosted tips. This hairdo is not going to make the most wanted list because no one really wants to find it. Not seen since 1999, this dude-do has made a flashy comeback. Celebrities Justin Bieber and Zayn Malik have recently sported the updated frosted tips. The two heartthrobs modernized the ‘90s trend by ditching the spiked hair and letting their long, magical wavy hair flow freely.

While the last decade of the 20th century definitely had its fashion faults, the ‘90s also had its share of decade-setting trends, some of which are copied and improved. Despite the bad trends, one thing is true: the ’90s still influences fashion trends.