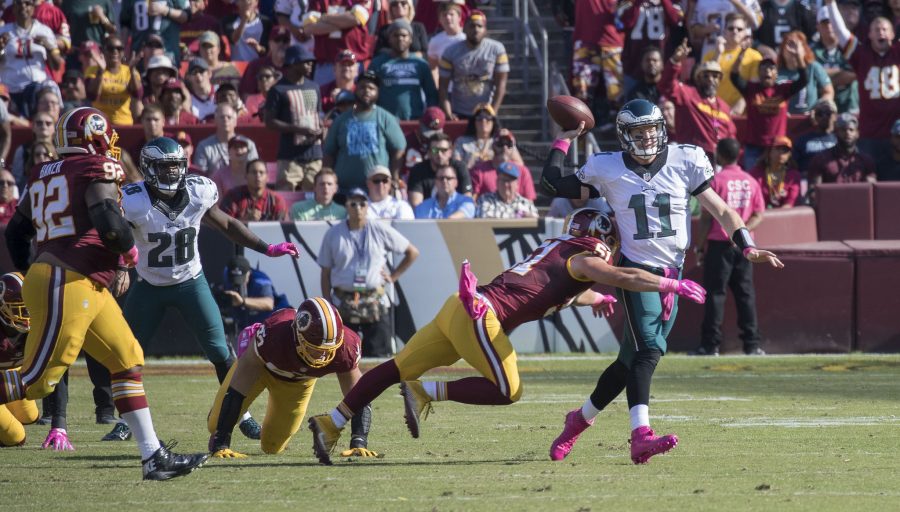 The 2017 NFL season has been nothing short of entertaining and unpredictable. Fans witnessed many exciting rookies make an instant impact, injuries and suspensions to superstar players and new touchdown celebrations. Tom Brady and Bill Belichick are officially the Tim and Pop duo of the NFL; The New Orleans Saints have solved their defensive troubles; The Texans finally found their quarterback, but he got hurt, and the Browns still suck. In the absence of Ezekiel Elliot, the Dallas Cowboys are… nevermind. It should be a competitive season down the stretch and many players are posting great numbers. Heading into week 12, here are some NFL award predictions.

Offensive Rookie of the Year

At the beginning of the season, expectations were high for rookie running backs. Jacksonville Jaguars’ Leonard Fournette and Carolina Panthers’ Christian McCaffery were the talk of the draft. But, opening night we saw the improbable performance of Kansas City Chiefs running back Kareem Hunt. Hunt scored three touchdowns and tallied 246 total yards against the defending Super Bowl Champion New England Patriots. Hunt hasn’t been as productive as of late, but he is first in rushing yards for rookies (by a wide margin) and has a rather easy remaining schedule. Hunt is the favorite for offensive rookie of the year.

Defensive Rookie of the Year

New Orleans Saints rookie cornerback Marshon Lattimore has helped contribute to the massive improvement of the Saints defense. Lattimore has done a fantastic job covering some great wide receivers. Lattimore will be tested in the remaining games, but expect Lattimore to be ready for the challenge. He will solidify himself as the defensive rookie of the year.

Comeback Player of the Year

Last year, expectations were high for first overall pick Jared Goff, but the Los Angeles Rams quarterback looked like a “bust.” Perhaps thanks to his new head coach offensive mastermind Sean McVay, Goff has transformed into a great quarterback and now the Rams are the number one scoring offense in the league. Goff is the anticipated pick for comeback player of the year.

Coach of the Year

This award is definitely the toughest to predict, but Minnesota Vikings’ Head Coach Mike Zimmer has earned it. Zimmer has constructed possibly the best defense and the most overachieving offense in the league. Zimmer had to adjust to star rookie running back Dalvin Cook and veteran quarterback Sam Bradford’s early season injuries. Through his leadership, undrafted quarterback Case Keenum and undrafted wide receiver Adam Thielen are playing like first round picks. Zimmer’s Vikings are the most overachieving team this season.

Offensive Player of the Year

Slow and steady wins the race. Carson Wentz has played well in every single game for the Philadelphia Eagles. Wentz can’t stop throwing touchdowns. He has thrown for the most touchdowns in the league, and his Eagles have the best record in the NFL. Wentz will win offensive player of the year.

Defensive Player of the Year

At 40 years old, Brady is playing as good as he ever has in his 17 year career. He lost his star wide receiver Julian Edelman early in the season, so he has leaned on new wide receiver Brandin Cooks and star tight end Rob Gronkowski. Brady ranks first in passing yards by a wide margin. Brady will beat out Wentz because Brady has a higher completion percentage, quarterback rating and has thrown for fewer interceptions. Expect Brady to win his third MVP award.