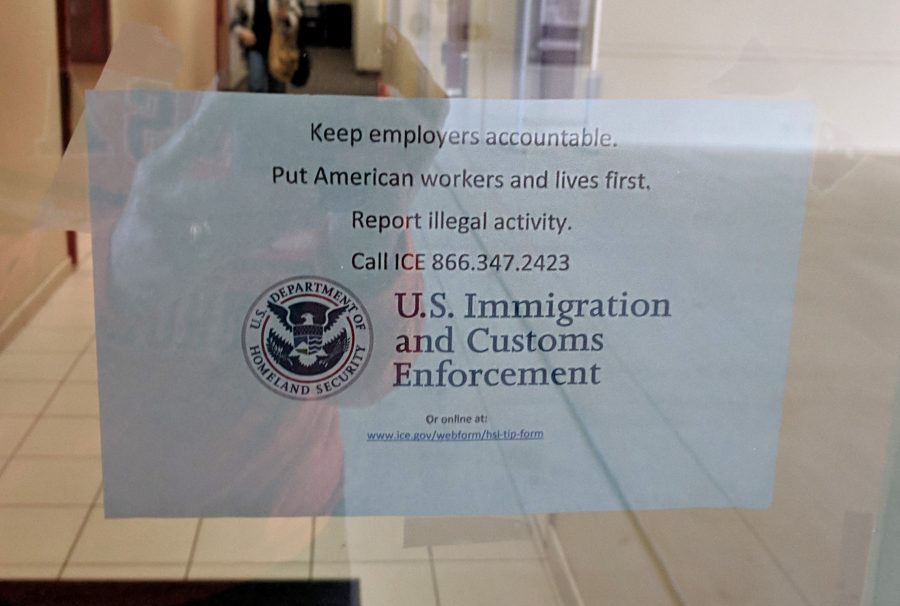 This poster was found taped on the enterance of the GSR building. ICE confirmed the posters were not posted by their agency. File Photo/The Paisano

ICE Public Affairs Spokeswoman Nina Pruneda gave an official statement regarding the poster. “While the phone number displayed is the correct contact information for ICE’s actual tip line…this is NOT a poster issued by our agency.”

Not only was the poster not released by ICE, but it was also not authorized and did not follow guidelines stated in the University’s Posting materials section, 9.09 of UTSA’s Handbook of Operating Procedures.

According to Joe Izbrand, UTSA’s chief communications officer, “The poster was unauthorized and was not approved for placement on university property. Its divisive undertones have no place on our campus.”

“In order for materials to be approved for posting, they require the name of the sponsoring campus organization and contact information to be stated prominently on the front of the poster,” said Izbrand.

“I would be suspicious of them and wonder who put them up. If they were actual ICE signs, I would be wondering why ICE is here when UTSA is such a liberal university,” Saenz said. “It seems contrary to all of the support UTSA offered undocumented students within the past year.”

This has not been the only instance of posters that include official ICE information and advocate reporting undocumented people have been posted.

Other unauthorized posters appeared on campus in November. Posters featuring figures such as Princess Diana and Henry Ford captioned “It’s okay to be white” were seen and then removed promptly by members of the Young Democratic Socialists of America (YDSA).

YDSA believes divisive posters, such as the ones posted, have the potential to affect the learning environment of students at UTSA.

“I think students would be uneasy. This isn’t the kind of safe atmosphere that UTSA wants to promote. Students who have concerns would be looking over their shoulder rather than focusing on their studies, and I don’t think UTSA is the place to be chasing undocumented students. UTSA has its own safety concerns and safety priorities, and ICE isn’t one of them,” said Saenz.

According to Pruneda, it is important for students to understand that the poster is fake.

“Please underscore to your readers and students that these are fake. These fliers are similar to the recent rash of false reports involving purported ICE checkpoints and random sweeps; these reports are dangerous and irresponsible,” said Pruneda.

“We are a university that embraces diversity, welcomes students, faculty and staff of differing opinions, cultures and backgrounds, and promotes a safe environment where there can be a free exchange of ideas,” said Izbrand.

Students who are concerned about materials posted on campus can contact the UTSA Police Department or the UTSA Ombudsperson.