Men’s basketball off to solid start 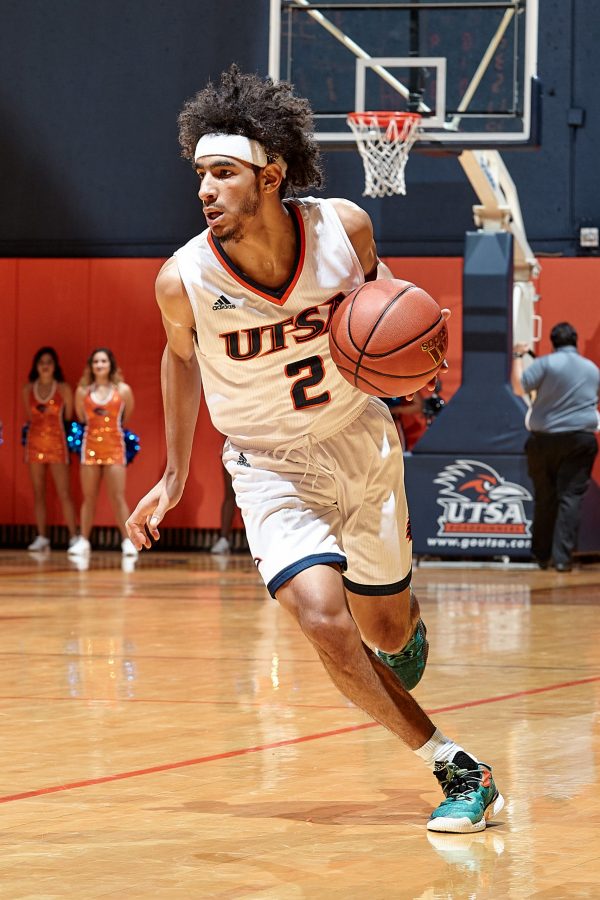 After the departure of both Gino Littles and Jeff Beverly at the end of the 2016-2017 season, many UTSA fans were left with a sense of uncertainty about the future of Roadrunner basketball. After posting a 14-19 record in 2016-2017, Head Coach Steve Henson needed to overcome the loss of two of his key players. With a young team, nobody knew what to expect from UTSA basketball.

So far in the new season, UTSA is off to a 5-4 start in non-conference play. UTSA basketball has also continued their dominant play at home. The ‘Runners are a perfect 3-0 this year when playing in the Convocation Center.

Jeff Beverly averaged nearly 16 points per game for UTSA last season. When he left to play for Iowa State, Beverly left a big offensive void the ‘Runners had to fill. Many fans seemed to think the offensive production of the team would decline without Beverly, but that hasn’t been the case thanks to two breakout freshmen.

Freshmen Jhivvan Jackson and Keaton Wallace have exploded onto the scene and produced big numbers offensively for the ‘Runners. Wallace and Jackson stepped up to help fill the offensive void and have stolen the show in a big way.

Jackson isn’t a starter, but he’s been electric off the bench. Jackson leads the team in scoring with 16.1 points per game so far, and is shooting 40 percent from three-point range. He also averages just over 22 minutes of playing time per game for the ‘Runners.

Together, the freshman duo average over 30 points per game and are shooting 38 percent from the field. The two freshmen, along with sophomores Giovanni De Nicolao and Byron Frohnen, have proved to be the heart and soul of the team thus far.

Although the season is still young, the 2017-2018 UTSA men’s basketball team has wiped away concerns regarding their offense. In the first nine games alone, UTSA has scored 90 or more points in four contests, including a big 125-point performance in a win over Ottowa in which six different players scored in double digits.

Conference play doesn’t begin until after Christmas, but if this early seasonn performance is any indication, the Roadrunners will have a real shot to compete in Conference-USA.

UTSA men’s basketball hasn’t had a winning record since 2013. With the team riding on the backs of a young core, they just might break that streak.