Athlete of the week: Carlie Heineman 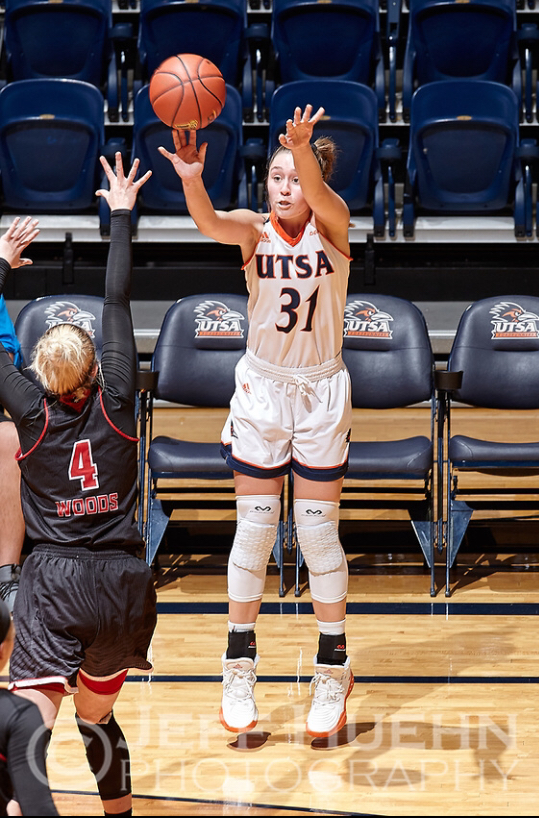 Heineman shoots a three over a defender. Courtesy of Jeff Huehn/UTSA Athletics

Throughout her basketball career at UTSA, Carlie Heineman has been lethal from behind the arc. She’s made 140 three-pointers during her time as a ‘Runner, and with most of her final season still to go, that number will only grow. Heineman improves her game every season, and she’ll work to continue that trend as the 2017-2018 basketball season gets underway.

Heineman was raised in San Antonio and began playing basketball through her church when she was only in the second grade. Immediately, she fell in love with the game. “I just really loved basketball from the get-go and always just stuck with it,” said Heineman.

Heineman attended Marshall High School for her first three years of high school. In her senior year, she attended Brennan High School, where she averaged 12.4 points per game and was an integral part of the team’s run to the state semi-finals. At the end of the season, Heineman was named to the 2014 all-state team.

Born and raised in San Antonio, Heineman was a Roadrunner in the making.“I committed to UTSA my sophomore year of high school,” said Heineman. “I wanted my family to see me play, and I wanted to be able to see my sister play in high school as well,” said Heineman on her decision to stay close to home. “I just thought it’d be a good fit for me,” she said.

Away from the hardwood, Heineman is currently in graduate school studying English. “I love to read and write, so I always wanted to do something in that department,” said Heineman. Although she is an English major, Heineman has plans to potentially become a basketball coach. “Originally I wanted to teach and coach, but now I’m thinking of coaching at the college level,” said Heineman on her career aspirations. “I love the game, I love studying the game and I like working with other people to teach the game of basketball,” said Heineman.

When it comes to hidden talents, Heineman claims not to have any. “If I do have a hidden talent, I haven’t discovered it yet,” said Heineman with a laugh. “Aside from basketball, I’m not that talented.”

With her final season now underway, Heineman says traveling with the team is what she’s enjoyed the most about playing basketball for UTSA. “It’s cool to get to fly out and go to different places around the country. Last year we went to Oregon, and this year we get to go to California,” said Heineman.

“Basketball has made me a better leader and helped me develop perseverance and determination,” said Heineman. “Because I play basketball and I have for so long, I’m able to work with all kinds of people. I think that’s really important for life in general.”

Next time you’re able to catch a UTSA women’s basketball game at the Convocation Center, keep an eye out for number 31. With over 75 percent of her career points coming by way of three-pointers, you’ll be sure to witness Heineman splash home a couple of threes.