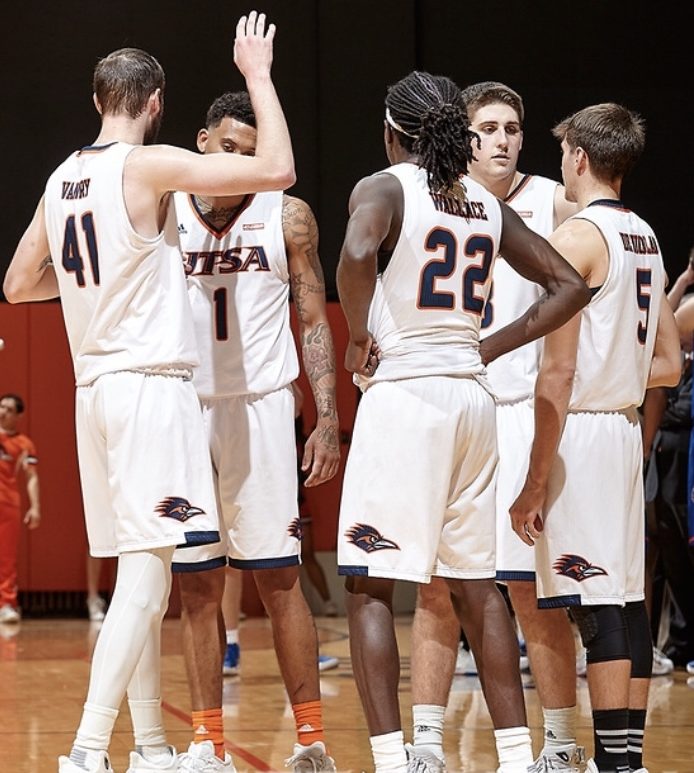 UTSA mens basketball huddles together during a timeout.

As the spring semester begins, so does conference play for the UTSA men’s and women’s basketball teams. The men’s team began the new year with a 2-2 record in conference play, beating LA Tech and Rice, with losses to Southern Mississippi and UNT. The UTSA women’s basketball season had a shaky start as they enter 2018 with a record of 2-12 and are currently mired in a seven game losing streak.

UTSA anticipates some growing pains under new head coach Kristen Holt. Holt was appointed the ninth head coach in UTSA women’s basketball history in 2017. This is her first season as head coach, and Roadrunner fans have a lot to be excited for when it comes to the future of the women’s team, despite a rocky start.

Crystal Chidomere, a senior on the team, leads the offense, averaging 13.5 points per game to go with 2.6 assists per game. To complement Chidomere, Marie Benson leads the team on the boards, averaging an impressive 9.6 rebounds per game. On the defensive side of the ball, Benson and Chidomere have wreaed havoc for the ‘Runners with a combined 1.3 steals per game to go along with 1.2 blocks per game. The women’s next game will be at 11 am, Jan 11 at home in the Convocation Center.

UTSA Men’s Basketball current record is 9-8 (.529%) under Head Coach Steve Henson, who is entering his second season at UTSA.  In the 2016-17 season, Henson improved the Roadrunners total wins from 5 in 2015 to 14 in 2016. This season, the team is alooking to take yet another step in the right direction.

On offense for the ‘Runners, Jhivvan Jackson has been lighting up the stat sheet with a whopping 18.2 points per game.  On the rare occasions Jackson does miss, Byron Frohnen has been there to clean up the glass, as he leads the team with 7.5 rebounds per game. Elsewhere, Giovanni De Nicolao is leading the team in both assists, 3.7 per game, and steals, 1.8 per game.

Some of the games have been great nail biters and some not so much, but that is what makes college basketball what it is: a roller coaster of emotion. With most of the conference games yet to be played, UTSA’s players, staff, students and fans are all ready and excited to see how the teams are able to close out the season and maybe even fight for a conference championship. Only time will tell as the spring rolls on.

The next game for both of UTSA’s basketball teams will be held on Jan. 11 at the Convocation Center.