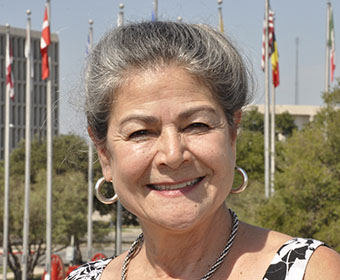 Jo Ann Andera will be inducted in the 2018 San Antonio Women’s Hall of Fame class after nearly 50 years of work at the UTSA Institute of Texas Cultures, serving as director of the Texas Folklife Festival for 37 of those years. The Paisano sat down with Andera to discuss her history with the Institute of Texan Cultures, diversity and thoughts about being inducted into the San Antonio Women’s Hall of Fame.

Q: How does it feel being inducted into the Women’s Hall of Fame?

Well, it’s very humbling. I guess it’s nice to be recognized for the work that you do. (The induction) was a complete surprise to me, but it’s quite an honor because it’s never been about me. It’s been about all of our participants. I give them full credit because if it wasn’t for them and the institute I wouldn’t be receiving this honor. It’s really all about all of these people that have got me to where I am today.

Q: Can you tell readers about the Institute of Texan Cultures?

The Institute was formed and built in 1960 and opened in ’68 as the World’s Fair Pavilion for the State of Texas. It was created to tell the story of Texans and what they brought with them. At the time, the message of diversity and who these people were was an amazingly new concept, because if you remember in the ‘60s, there were riots and a great amount of unrest in our country. The unique concept of bringing all these ethnic cultures together and celebrating them was really something very unique, and it still is today really.

Q: What do you do at The Institute of Texan Cultures?

Presently, I am the director of our special events at the Texas Folklife Festival and the Asian Festival. When I came to the institute 47 years ago, I was hired as a multilingual tour guide; I spoke Spanish and Arabic. The girl who had the position before me, was here from Lebanon and was leaving, so they were looking for multilingual tour guides to do tours. So I went to work in 1970; I was 18 years old. I learned about the history and all the things that open a window into who we are as Texans, with all of the different ethnic groups. In 1972, the Institute hosted the first Texas Folklife Festival and I was one of the members of a dance group performing. It brought the Institute to life, and all the ethnic communities and all the colors and costumes; and it was incredible!

Q: What is the importance, especially today, of celebrating and appreciating cultural diversity?

I think it’s what makes this country great. Some of these new groups, we introduce them to the community in a very positive environment. When we have a group of Indonesians, people will learn ‘oh, we have Indonesians here,’ and they see the beautiful dance and the costumes and then they get to see their crafts and suddenly it’s very non-threatening. You start to learn about the cultures of other people, and it really makes an impact, but very subtly helps people. I think the importance of being able to get along and learn about each other makes us better individuals, better citizens and that makes us a better community.

Q: How does it feel to be celebrated and recognized with all these other local women who are doing such great things community?

Well first, it’s thrilling and second, it’s very humbling. I think I’ve always just really tried to work hard and tried to be a good person. I tried to have a strong work ethic. But, it’s about who I am as a person, and the kind of contributions that I can make as a person and as a woman. I love being a mentor and a role model to others; It’s a very special honor and a privilege.