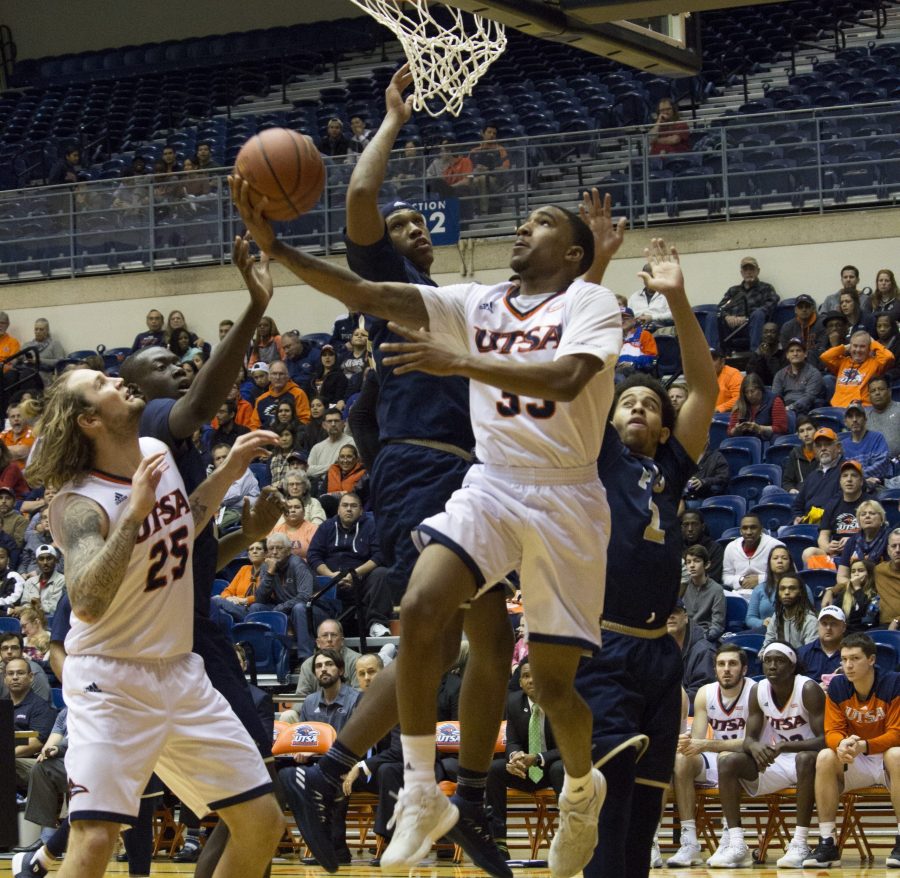 George Willborn III goes up and under for a layup. Chase Otero/The Paisano

Roadrunners find themselves on a three game losing streak

The Roadrunners came into Saturday afternoon’s matchup against Florida Atlantic University (FAU)  fresh off back to back conference losses. Thursday’s loss to Florida International University (FIU) marked the second time this season the ‘Runners have lost at home. UTSA’s comeback fell short against FIU after a desperation shot by point guard Giovanni De Nicolao missed at the buzzer to give the Panthers a 79-76 victory.

FAU guard Justin Massey caught fire early in the first half as he went 3-3 from three-point range to give the Owls an early lead. However, UTSA stayed close behind after both Wallace and George Willborn drained a couple of three-pointers of their own.

After a hot start for both teams offensively, UTSA cooled off and went on a five-minute scoring drought while FAU went on an 8-0 run to increase their lead to ten halfway through the first half. Slowly but surely, UTSA’s offense began to find their rhythm and went on a run of their own. The ‘Runners tied the game at 22 with seven minutes left in the first half after trailing 20-10 earlier in the game.

UTSA’s star freshman Jhivvan Jackson entered the game with an average of 18.4 points per game. However, Jackson was guarded tightly by FAU for the majority of the first half. With lack of production from Jackson, someone else was going to have to step up. George Willborn III had one the best games of his UTSA career in the loss against FIU, and he seemed to pick up right where he left off. Willborn shot 56 percent and poured in 11 points for the Roadrunners while grabbing seven rebounds in the first half.

With the game tied, Jackson hit a three-pointer from the corner in the closing seconds of the first half to give UTSA a 36-33 halftime lead over the Owls.

As the second half got underway, UTSA maintained their slim lead over the Owls after a cold start. However, FAU soon took a four-point lead after a couple of UTSA turnovers led to some points for the opposition.

Just as momentum began to swing in favor of the Owls, UTSA freshman Jhivvan Jackson finally managed to break free. Jackson hit a three-pointer in transition, then proceeded to make a dazzling up and under layup that got the crowd on their feet. Jackson matched his first-half point total within the first nine minutes of the second half. With 8:28 left in the second half, UTSA trailed 56-53.

Even with Jackson getting involved more with the offense, FAU still stretched their lead to six after a string of made three-pointers.

With just under five minutes left, UTSA trailed FAU 61-55. Both Wallace and Jackson earned trips to the free throw line and made the most of their opportunities. With three minutes to go, the game was tied up at 61 a piece.

UTSA soon fell behind 68-63, and things were looking bleak for the ‘Runners. With time winding down, Jackson took over. Jackson lit up the Convocation Center by hitting back to back three-pointers, giving UTSA the lead with under a minute to go. However, the Roadrunners couldn’t finish the job. FAU answered with a clutch three-pointer of their own with nine seconds on the clock. With one final possession, UTSA guard De Nicolao slipped and fell out of bounds turning the ball over, and sealing a 73-69 victory for the Owls. It was UTSA’s third straight loss.

“We haven’t been tough enough and the ball isn’t moving the way it was earlier in the year…so we’re searching,” said Head Coach Steve Henson. “We better figure it out fast because it doesn’t get any easier from here.”

Jackson poured in a total of 28 points, 20 of which came in the second half, but the ‘Runners still came up short. Willborn was held scoreless in the second half, and the other star freshmen of the team Keaton Wallace continued his cold streak as of late and finished 2-9 shooting with only eight points.