SJP Activism on and off campus 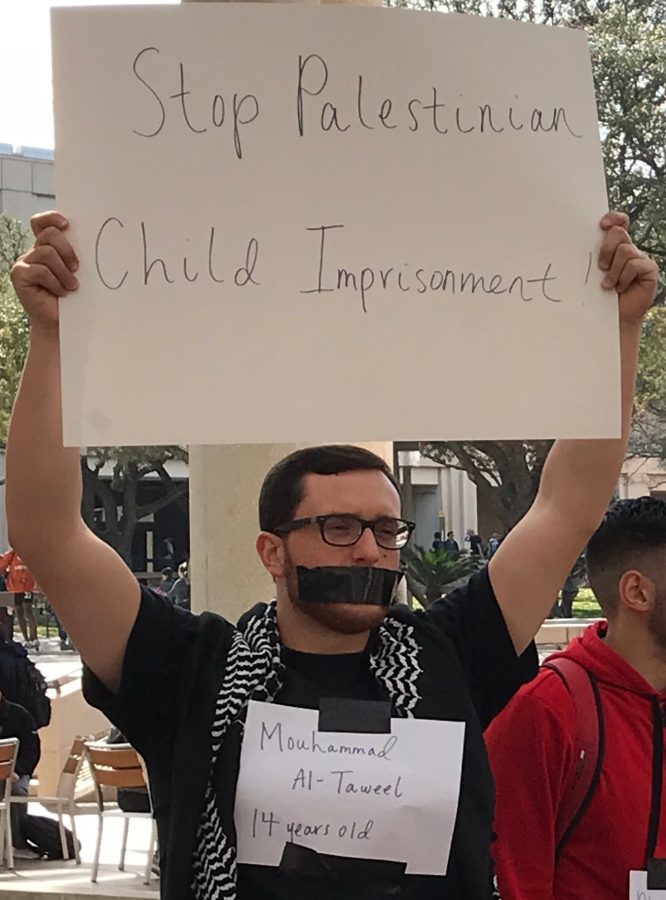 The silent protest featured students with a name of a Palestinian child imprisonment victim. Justice Lovin, The Paisano

The UTSA chapter of Students for Justice in Palestine (SJP) held a silent protest in the Sombrilla on Jan. 23 to raise awareness of the many Palestinian children who have been imprisoned by the Israeli military (IDF). The protest followed events on and off campus at which the group hosted Dr. Luke Peterson who spoke about his research on media representation of the Israel Palestine conflict.

At the first event, held on Friday, Jan. 19 in the Travis room, Dr. Peterson spoke to students about the history of and media narratives surrounding the Israeli settlement movement. This was followed by a Q&A session with students.

The next day, Saturday, Jan. 20, Dr. Peterson spoke at SJP’s annual “A Night of Hope for Gaza” fundraiser dinner. At this event, he spoke about Ahed Tamimi, the 16-year-old Palestinian girl who became a symbol of resistance when she was arrested by Israel after a video of her slapping an IDF soldier went viral and also spoke about how neoliberal economic policy has shaped the Israel Palestine conflict.

“(Israel) has become a military technocratic state, marrying war-making industries and capitalism in a unique way. That makes them very valuable for other military institutions, including and especially the one here in the United States that wants to also capitalize on their research and development; …the actual implementation of deadly technologies against a captive population,” Dr. Peterson said.

The event was hosted by SJP president and senior anthropology major Maureen Kaki, who spoke about her own experiences and identity as a Palestinian. The event raised approximately $10,000 for the Middle Eastern Children’s Alliance, a group that provides medical aid, clean water, educational funding and project funding for communities in Gaza that have been devastated by Israeli military strikes.

Then on Tuesday, Jan. 23, SJP held a silent protest in the Sombrilla. Around a dozen SJP members stood on either side of the walkway through the tables with tape over their mouths. They held signs with the names and ages of imprisoned children written on them.

“We are demonstrating against the imprisonment of Palestinian children in Israeli prisons. Who are subject often without any kind of reasonable process to military law,” Kaki said, placing the protest in the context of SJP’s goal to “give a more nuanced perspective of the quote unquote conflict (between Israel and Palestine).”

Ammar Musa, an SJP member and mechanical engineering major at UTSA, also participated in the protest. “These kids don’t have voices. Their childhoods are ripped away from them. They can’t speak for themselves, so we’re out here telling their story,” Musa said.