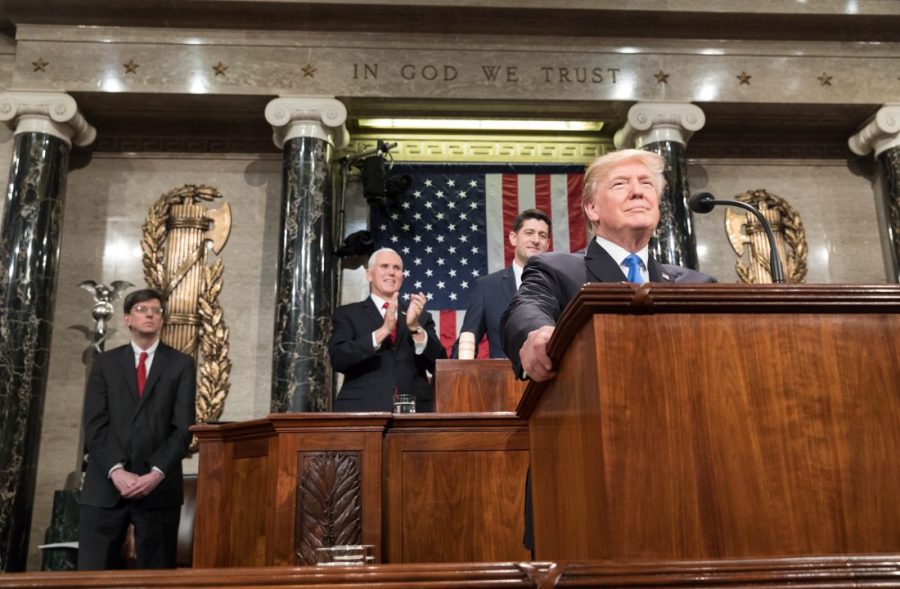 Fact checkers across the country were prepping their fingers as President Trump took the podium during his first State of the Union Address on Tuesday. With that said, it’s hard to say if President Trump’s address left the Union in a better place. People hoped Trump’s address would uplift legislators and unify a greatly divided Union separated by disagreements of immigration and domestic policy. Unfortunately that is not what happened.

Trump’s ‘Republican pep rally’ tallied a total of 75 standing ovations. While Republicans were enjoying a much needed leg day, some Democratic legislators boycotted the address all together. Throughout the night, the unimpressed Democrats looked like they were sitting through America’s funeral.

Trump’s self accreditations for his first year in office included the creation of 2.4 million jobs, the lowest unemployment rate in forty-five years, revolutionary tax cuts, and even his efforts to establish a non-partisan agreement on immigration policies. Much to our surprise, he’s right! Well, kind of.

Giving Trump the benefit of the doubt, since he has taken office, our economy has been thriving. The accomplishments he is parading do in fact have some traces of legitimacy. However, crediting his administration as the direct cause is nonsensical. According to the Labor Department, decreasing trends in unemployment rates just recently hit an all time low but have been steadily falling since the Obama administration. Implying Trump’s first year in office is the primary cause of America’s “great” reconstruction is inherently deceiving. It is like doing all the work of a group project only to have the partner whose sole responsibility is presenting the information to receive all the credit for your work.

Even when Trump boasted about the historic low unemployment rate for minorities, cameras pointed to African-American democratic legislators who were frozen in their seats. Many conservatives felt they should have shown gratitude, but how could they? Perhaps they refuse to celebrate a president who doesn’t condemn his white supremacist supporters. Did you forget about that? Well these legislators haven’t.

Trump claimed his recent tax bill includes the “biggest tax cuts and reforms in American history” and will provide “tremendous relief to the middle class.” This is another example of Trump’s signature alternative facts. This massive reform immediately cuts taxes from the lower class all the way to the 1 percent. The Tax Policy Center says 65 percent of savings this year are going to the the top 20 percent of the income ladder and will gradually become more beneficial for the top one percent. If Trump’s aim is to seek the approval of the American people (a Gallup poll on Jan. 21 was at 36 percent approval), then enticing the wealthiest Americans is not in our best interests.

One of the highlights in his rhetoric was his evaluation of American ideals,

“In America, we know that faith and family, not government and bureaucracy, are the center of American life.”

After Trump’s recent alleged rendezvous with adult film star Stormy Daniels, it’s hard to tell if the president’s ideals are synonymous with his actions.

So after 80 minutes of the president’s address, what is the state of our Union? Here’s the gist, Republicans and Democrats in Washington need to get their act together. One of the biggest issues: immigration. Republicans have proposed a deal that will provide amnesty to 1.8 million immigrants who came here as children, but they are still adamant about Trump’s infamous wall. A $25 billion(yes with a B) issue Democrats will not agree to. If a deal is not made soon another government shutdown could be imminent and the discord in America will only exacerbate.