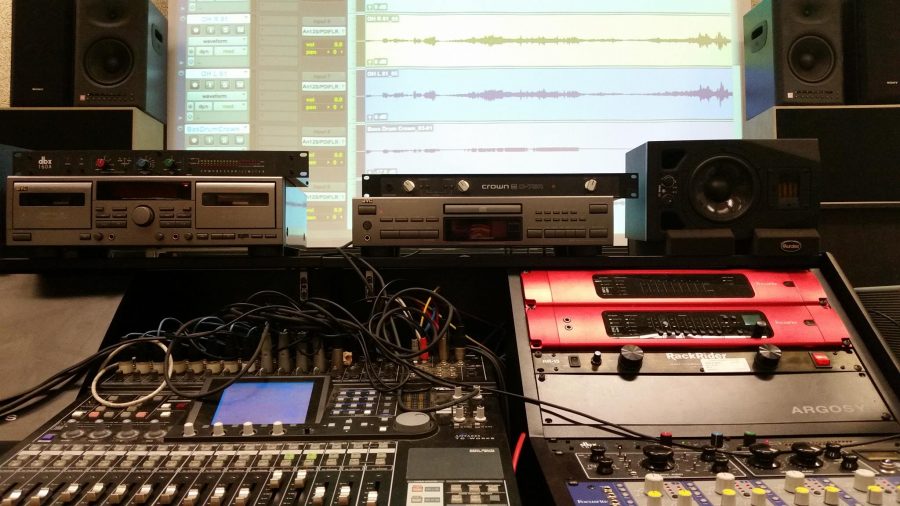 The main board in the Music Tech Lab and its various preamps, effects and mixers. Photo courtesy of MuTe

Have a passion for the technical side of producing music?

MuTe festival will be held on campus in the Music Tech Lab 3.01.30 B and the Recital Hall in the Arts Building from Feb. 21-23.

The festival will have various speakers lecturing on music production, acoustics of a tracking room, composition creation, a chamber ensemble performance as a live film score and a night of compositions in surround sound accompanied with a light show.

MuTe Fest is led by the Music Technology Club or MuTe for short. MuTe is led by president Wesley Penix and professor Dr. Andrew Bergmann who serves as administrative oversight to the club.

To kickoff the festival is Grammy-award winner bassist and producer Steve Starnes, who has recorded musical acts such as Willie Nelson and Buddy Guy.

Starnes runs Bee Creek Recording Studio in Austin. Starnes will teach a class in live tracking, mixing and session preparation, in which he will provide his expertise regarding the tricks of the trade.

This class will be held on Feb. 21 from 11 a.m. to 3 p.m. Live tracking is merely “capturing sound and moments through the waves in a room with a microphone,” according to Bergmann.

The live tracking portion of a recording session is when an engineer records all of the instruments of a song, which include, guitar, bass, drums, vocals etc.

Once all of the instrumentation has been recorded, the engineer moves to the next step, which is the mixing portion. Dr. Bergman defines mixing as “giving every element of instrumentation its proper spot in the stereo.”

Dr. Bergmann summed up the rest of mixing with an analogy: the engineer “places musicians on a stage and spaces them out on that stage where they are simultaneously inte racting with each other, but remain independent agents that the independent listener can identify.”

RB Blackstone will teach a class in acoustics, and studio sound treatment on Thursday, Feb. 22 from 1 p.m. to 4 p.m.

Blackstone, a producer, performer and sound engineer, is known as an acoustics specialist famous for having the best set of ears in the industry.

According to Dr. Bergmann, “(Blackstone) has made a career out of his understanding of acoustics and how to design a studio.”

Derek VanScoten, AKA Cloudchord, will lead a demonstration on Feb. 23 on how to use the recording program Ableton Live with the Push Pad Controller as a compositional tool. VanScoten is a well known composer, producer, soundtracker and guitarist. VanScoten has worked with groups such as DJ Logic, Devotchka and Lotus.

Later in the afternoon on Friday, from 4 p.m. to 6 p.m., Jamail Chachere, a distinguished UTSA student, will lead a 16- piece chamber ensemble as they provide a live score to the film “The Kid With a Bike” along with the projection and dialogue.

Bergmann referred to Chachere as “musical polyglot who produces his own music and plays trumpet, bass and guitar.”

MuTe hopes the festival will cast a lens for what has been going on in the music lab and will be an overall showcase for MuTe itself.  The music lab is open to all students.