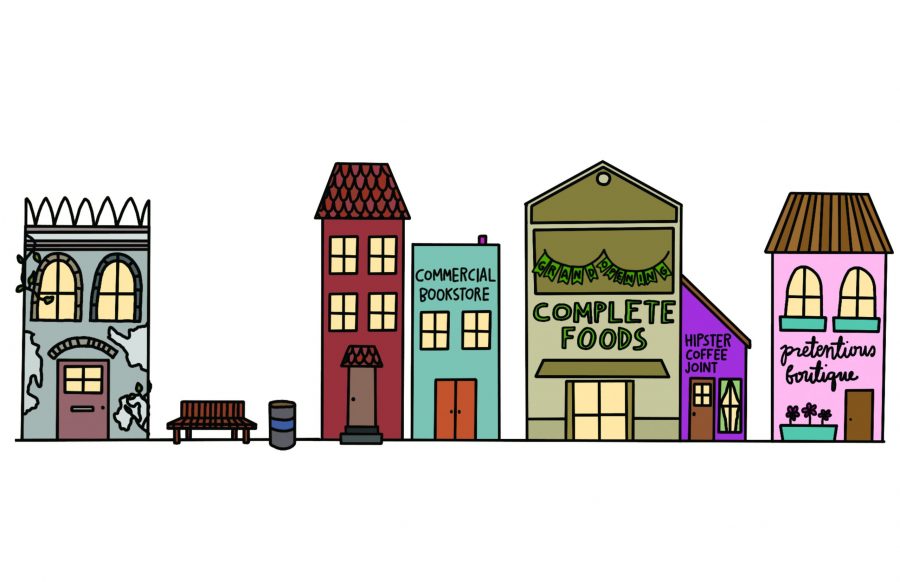 Development on the east side makes and breaks the American dream for different gente.
It is the American Dream to one day be able to afford a better life for our children and those we love. The dream to introduce them to a higher standard of living, to raise them in a better, more affluent neighborhood with better education and opportunities.

But what if the home that had nurtured you for your entire life had become a part of that better and more affluent neighborhood? Now, you can’t afford to live in it.

This narrative is transpiring in the suburbs of almost every major city in America. Your city’s policy makers may call it Urban Renewal or Economic Development, but it’s least ambiguous name is gentrification.

Merriam Webster defines gentrification as “the process of renewal and rebuilding accompanying the influx of middle class or affluent people into deteriorating areas that often displaces poorer residents.”

Now, the word “gentrification” is among the most controversial and painful of words for a community.

There are advocates who believe a revitalization of the city and its residences is positive and necessary, and then there are critics who believe the displacement of these residents is rash and discriminatory–and both are valid arguments. However, there are some very true and harsh realities of gentrification. It is much larger than one community or one city; gentrification is a systematic and intentional process taking place all over the Westernized countries of the world.

Gentrification is hypothesized to have begun with urban decay and deterioration of inner-cities during the post-war period. Inner-city communities, largely occupied by minorities, were neglected by the city, given little to no policing and allowed to run rampant with drugs, crime and poverty as “white flight” to the suburbs saw the wealthiest, most educated residents moving outward.

Now, many have made the opposing argument that these inner-city community members didn’t properly maintain their homes, but with discriminatory practices such as redlining–a practice by which banks and insurance companies deliberately refuse or limit loans, mortgages and insurance within specific geographic areas, especially those heavily concentrated by minorities–many homeowners weren’t fairly awarded the opportunity to do so.

“It intensified after World War II. Banks would take urban maps and draw lines around areas that they would not grant loans to, and those were significantly minority neighborhoods. Some have suggested that it was a part of a grand conspiracy to weaken those neighborhoods and later prepare them for gentrification,” former UTSA professor of geography and political science Gary Houston said.

Toward the end of the 1960s and early ‘70s, the stress of the high cost of commuting, rising gas prices and rising transportation fares juxtaposed with the low cost of purchasing old downtown properties and revitalizing them began to make downtown real estate increasingly attractive again, now fast-forward to present day and regression back toward inner city can be seen all over the country.

San Antonio gained 24,473 residents between July 2015 and July 2016, ranking third among the 15 U.S. cities that recorded the largest numeric increases in population that year according to the U.S. Census Bureau.

From an economic lens, a growth of this magnitude looks great on paper, but it begs the question of just where these new residents are going, especially in light of the city’s major housing shortage.

“As it turns out, the most desirable neighborhoods tend to be those that are close in, those near the central business district,” Houston said.

And the fact of the matter is, when high income buyers suddenly find a neighborhood attractive, low-income citizens are forced out. Either their property taxes become too high and they are forced to flee as a means of survival, or they are persistently harassed by developers to sell their homes.

“When your property becomes worth a certain amount, and you’re living on a fixed income and the property values are increasing around you, many people find that they can’t afford not to sell,” Houston said.

The city of San Antonio’s intentional plan to attract middle class and more affluent residents into desirable inner-city neighborhoods shifts existing residents, who can’t sustain this new standard of living out and demographically these neighborhoods are majority minorities.

In the largest majority Hispanic city in the United States with a Hispanic population of an estimated 63 percent, that is no modest statement.

In response to the removal of low-income citizens from their homes, it would be expected that there would be somewhere designated by the city for them to go.

According to Metrostudy data, in 2013 40 percent of construction started in San Antonio were in the under $200,000 price range, and in 2017 that figure dropped to 17 percent.

So not only are low-income citizens being displaced from their current homes, but there are no affordable homes for them to acquire in the wake of their displacement.

This is occurring rapidly all around San Antonio, the latest victim being the Eastside community of San Antonio.

“We are going to witness the largest displacement of people since the building of the Alamodome,” Eastside Resident Salena Santibanez said, alluding to a $186 million construction project that displaced generations of local families.

Take for instance the Dignowity Hill neighborhood, a historic area for working-class African Americans and Chicanos with a history far too long to summarize, that is experiencing a surge of gentrification and has now become one of the most expensive neighborhoods in San Antonio.

But just across the tracks sits a neighborhood that is largely inhabited by immigrants and working class citizens with a median residential income of $17,000 a year.

Santibanez referenced a home across the street from Booker T. Washington Elementary that has sat vacant for over five years.

“Could you imagine if a family lived there, and all they had to do was walk across the street to send their child to school?”

“Instead, the city has turned a blind eye, and children have to walk by this house and witness needles and condoms on their way to school.” -Selena Santibanez

“Now, a block away is a house that was flipped and put on the market for $250,000. Of course, it does not sell. It is just sitting there decreasing the property values around it.”

Not only does gentrification cause displacement and depreciation of property value,  it has an effect on the city’s culture.

Though many of these homes and historic districts are protected by San Antonio’s Architectural Review Board, it is important to note that historically the citizens of San Antonio have truly been largely responsible for maintaining the city’s rich culture.

For example, after a flood in the late 1920’s, the city government made plans to convert the San Antonio River into a storm sewer system.

However, it took the voices of what is now known as the San Antonio Conservation Society and the surrounding community to speak out and save it.

Imagine the city of San Antonio without its historic landmark that has since attracted millions of people to its tourist destinations and famous restaurants.

“Our political and governmental leadership has not been responsible for the major cultural preservation in San Antonio.

Citizens really have had to take the lead and encourage our leadership to buy into the mission that the public has shared,” Houston said.

Gentrification has the potential to push small businesses, family owned restaurants and families that don’t gross six-figure incomes out of the city, taking their culture with them–the very culture San Antonio is known for. The culture that brings hundreds of thousands of visitors a year.

A city is not only the highways it encompasses or the skyscrapers it holds but more, the culture, the food, the music, the people in it’s communities, schools, churches and homes.

Gentrification has historically removed the fingerprint of many cities and instead replaced it with an outline, that merely resembles the face of every other major city in America.

And as our city celebrates its tricentennial this year with celebrations of food, music and culture, it seems as though they may have forgotten about the abuelitas and the tios who kept this celebratory rich culture alive.