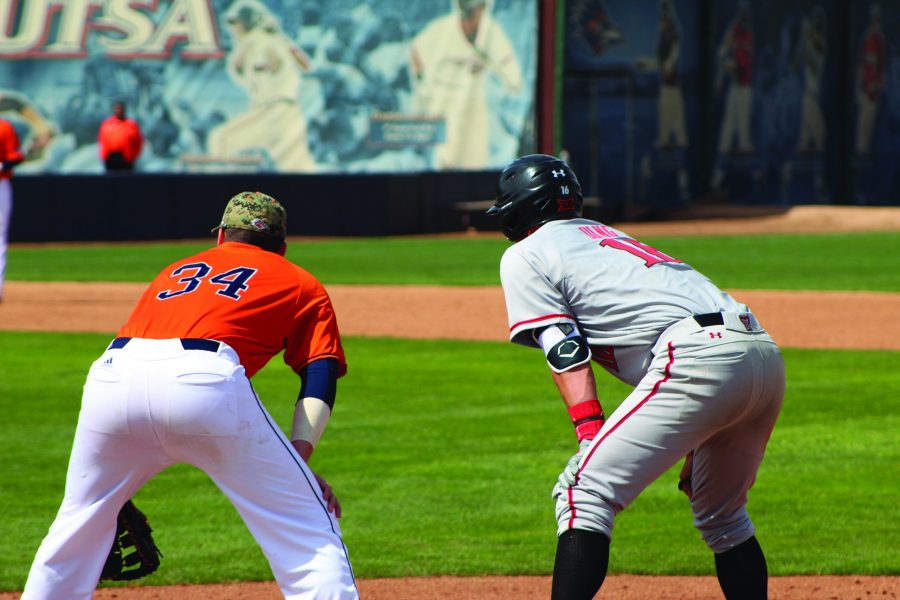 After a strong 2-1 start to their season, UTSA baseball had a huge challenge in front of them as the Texas Tech Red Raiders made the trip down to San Antonio to face off against the Roadrunners in a three game series.

Texas Tech entered the series ranked third in the nation and were able to sweep the ‘Runners, as they improved to a perfect 7-0 while sending UTSA on a three game losing streak.

Although the two teams were originally slated to face off Friday through Sunday, heavy rainstorms throughout much of Texas forced Friday’s highly anticipated matchup to be pushed back to Saturday at 8 p.m. Due to the wet conditions of Roadrunner Field, the first two games of the series were played at Wolff Stadium, home of the San Antonio Missions.

In game one, the Roadunners were shut out by a score of 5-0 by the Red Raiders. Texas Tech’s starting pitcher Davis Martin proved to be too much for the UTSA offense to handle, as he only allowed three hits through five innings of work while striking out five batters.

Even after Martin came off the mound, relieving pitchers Caleb Killian and Jose Quezada didn’t make life any easier for UTSA. The relief pitchers only allowed one hit between the two of them and struck out four batters. As a result, the ‘Runners were unable to get anything going offensively.

UTSA ace Chance Kirby surrendered only four hits but gave up three runs through five innings of work on the mound. Kirby also walked five batters on the day. The UTSA star pitcher is off to a rough start in 2018, and he is now 0-2.

On Sunday the two faced off again in game two of the series. Once again, UTSA was unable to generate any kind of offense at the plate as they were shut out for the second straight game.

John McMillon took the mound for the Red Raiders and struck out six UTSA batters while only allowing three hits.

UTSA’s Trent Bowels was able to pick up a pair of hits including a double off the centerfield wall, but the ‘Runners were unable to capitalize off them.

Steven Dressler got the start in game two for UTSA and logged a quality performance on the mound. Dressler only allowed three runs and pitched for almost seven complete innings, throwing 99 pitches. He struck out five batters in what was an impressive performance, but unfortunately it wasn’t enough.

Dressler did not get any run support from his offense, and as a result, those three runs would be enough for Texas Tech to take the 3-0 victory over the ‘Runners.

On Monday, the series finally shifted back to Roadrunner Field at UTSA. Having been shut out through 18 innings of baseball, the ‘Runners were eager to finally put some runs on the board against the number three team in the nation.

After falling behind 7-0, UTSA’s second baseman Bryan Arias finally broke the scoring drought with a big two-run home run in the bottom of the fifth inning to bring the score to 7-2.

In the bottom of the sixth with the bases loaded, UTSA freshman Jonathan Tapia crushed a double off the wall to clear the bases and push across three more runs for the ‘Runners.

Soon after, Arias came through again and hit a base hit to bring in Tapia and make the score 8-6. However, that was as close as the ‘Runners would come. Texas Tech added a couple more runs in the later innings to win 10-6 and complete the sweep.

In what many thought would be a blowout, UTSA showed they could hang with one of the best teams in the nation. UTSA baseball will be back in action Tuesday Feb. 27 when they take on the Longhorns in Austin.