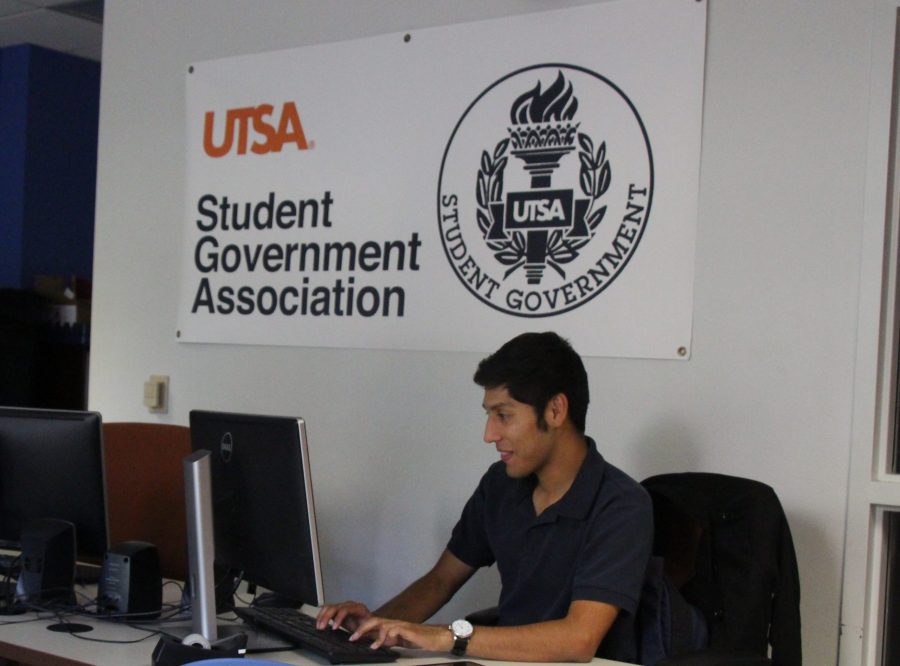 Members of the Student Government Association work in their office to draft memorandums. Photo Courtesy of Joseph Mabry

Currently, UTSA faculty have the option to use the plus/minus grading system to grade coursework, instituted in Fall 2011, after being approved by the Faculty Senate on May 10, 2010.

The resolution states that the plus/minus grading system creates “real and visible disparities between students of different instructors, departments and colleges.” Some universities are now reevaluating their use of the grading system.

According to the resolution, SGA had previously passed a resolution in November 2010, GA 104, “expressing dissatisfaction” with the Faculty Senate’s then-approval of the plus/minus grading system.

Providing reasons for their dissatisfaction with the plus/minus grading system, SGA stated in the 2010 resolution that implementing the plus/minus system would be inconsistent among instructors and that an “A+” does not award 4.33 grade points on a 4.0 grading scale.

In a Dec. 3, 2010, memo, John H. Frederick, then-provost and vice president of academic affairs, told department chairs that “although not explicitly stated in the policy, the intent is for this (grading system) policy to be ‘permissive,’ but not ‘restrictive.” Faculty had the choice to use the plus/minus grading system in their courses. Faculty members are required to explain how grades will be distributed in their courses via course syllabus.

“I think it only benefits students who are receiving high C’s or B’s,” Kyli Wallace, sophomore pre-nutrition major, said. “People who are getting low A’s aren’t receiving the full points for GPA (if there wasn’t a plus/minus grading system).”

“Miranda Hairgrove, UTSA senior, said, “I personally dislike it, because I think if you earned an A, you should get the full credit for an A.

“It’s kind of antagonistic to tell students that, even if they’ve earned a specific grade, they won’t get full grade point average points for it because they did meet an arbitrary minimum.”

Some students don’t think a grading system is conducive to a university at all.

“Grading systems as a whole should be abolished,” Javon Robinson, senior cyber security major, said. “They’re counter productive and stifle innovation and creativity, and reduce a student’s worth to an arbitrary grade.”

In 2014, the Faculty Senate Academic Policy & Requirements (APR) committee recommended not to approve a proposal by SGA to amend the plus/minus grading system to make ‘A+’ grades equal to 4.33 grade points, citing that only law schools accept an ‘A+’ as 4.33 grade points.

“The view was that ‘A+’ has the positive effect on transcripts of further impressing potential employers & families,” a memo written by Bennie Wilson, then-chair of the APR committee, stated. The memo also also said that “there [was] no perceived significant dissatisfaction with the plus/minus grading system at UTSA,” in providing reasons for not approving SGA’s proposed amendment.

The resolution has quoted the graduate council, saying they are currently working with the University Provost C. Mauli Agrawal, who “has indicated that he supports dropping the plus/minus system at the graduate level.” The SGA resolution is going to be discussed at the Faculty Senate meeting. SGA stated they would provide a resolution of options within six weeks of the resolution’s passing.