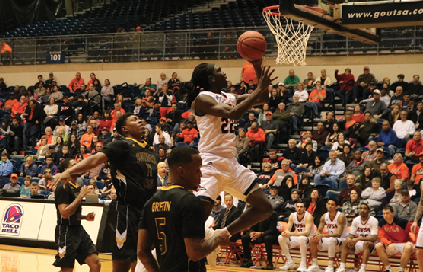 Freshman guard Keaton Wallace goes up to the basket for an easy layup. Ellyson Ortega/The Paisano

On March 3, UTSA Women’s Basketball hosted the UAB Blazers in the Convocation Center to finish off their season. The Roadrunners fell short to the Blazers by a score of 74-64. The final home game also served as “Senior Night.” The three seniors for the 2017-18 squad are Guard Crystal Chidomere (#4), Guard Carlie Heineman (#31) and Center Billie Marlow (#40).

The emotions surrounding the seniors playing in their last home game have been high. “It’s been great; the love has been amazing and everything has been great,” Chidomere said. With family, friends and fans all in attendance, the Roadrunners made the best of their last game in the Convocation Center. Heineman called it a “mixed bag of emotions.”

Before the game began, the seniors of the team were honored with their families and each senior received their own framed jersey.
Chidomere was also honored with a game ball before the game for breaking 1,000 career points. On breaking the impressive mark, Chidomere recalls on the moment: “It was definitely a great feeling. . . huge for me as far as personal accomplishments.”

Head Coach Kristen Holt says the team is “happy with progress [made over the course of the season]. We’ve definitely improved, and it’s paid off here towards the end of the season.”

For the second half, UAB got their scoring together and gained the lead in the third quarter, 53-46. In the fourth quarter, the Roadrunners kept fighting, and there were times when it seemed a comeback could happen, but the Blazers kept hitting their shots and free throws to keep UTSA at bay. The final score was 74-64 with the Blazers on top.

Chidomere finished the game with 18 points, while Guard Barbara Benson finished the game with a double-double, putting up 19 points and 10 rebounds.
Though the last home game has passed, the Roadrunners still have the Conference USA tournament on Wednesday to keep their schedule and champion dreams alive. The Roadrunners have to put this loss behind them and be ready to compete.

“We’re gonna take this loss, learn from it and be ready on Wednesday,” Heineman said. “We’re going to get after it and go get it. UAB is first in our conference and we gave them a good game,” Chidomere added. Sophomore Forward Marie Benson says the team is working to “come out more aggressive.”

After a disappointing season, the team has shown some resurgence in their last five games and are trying to carry their momentum into Wednesday.
“They need to get out there and play hard for 40 minutes,” said Holt. “That’s gonna be the big thing we have to do. We’re gonna have to execute well. At this time of the year it’s all about execution.”

Holt likes the idea of the Roadrunners being the underdog and embraces being a lower seed headed into the tournament. “We believe we can do well. When you’re a lower seed you really have nothing to lose.” The Roadrunners are looking to sneak through and make some noise.

The Conference-USA Championship will begin March 7, and the first game starts at 11 a.m. The Roadrunners will play the Florida Atlantic Owls at 1:30 p.m.