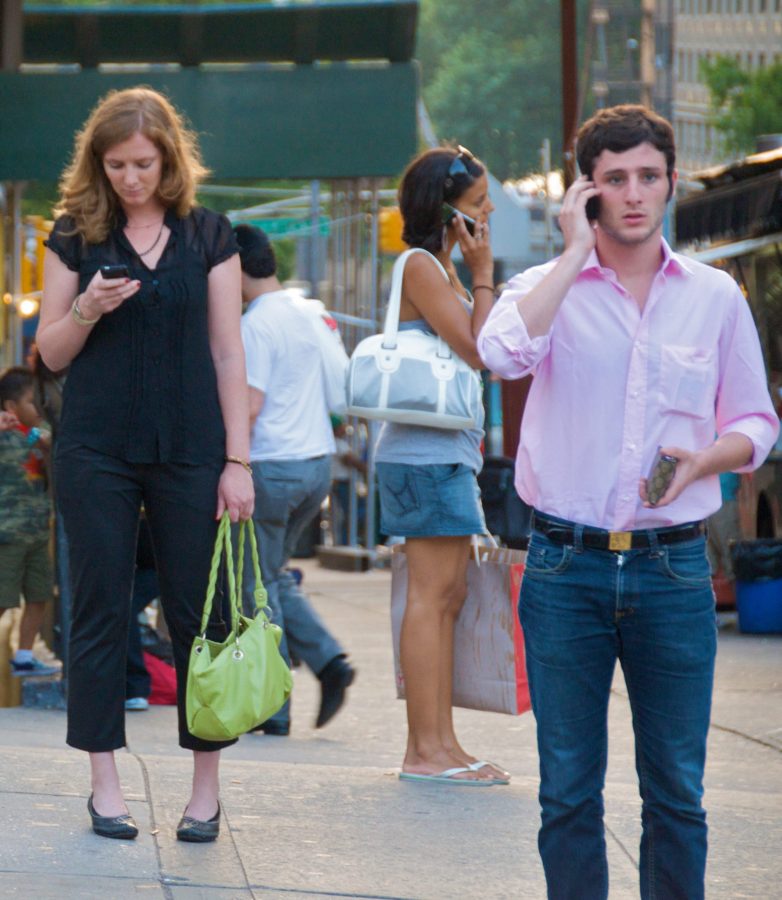 People on their phones on a New York City street. Photo Courtesy of Creative Commons

Mary McNaughton-Cassill, PhD, a professor of psychology in the college of liberal and fine arts, has been researching the general stress of modern life. That includes the constant 24-hour news cycle, the overwhelming flow of information available to us via the internet and the increasing role of social media in our lives.

Her research suggests that a majority of college students receive their news from the internet and social media, rather than traditional television or newspapers. McNaughton-Cassill says being connected to technology can affect how you view the world.

One of the effects of being constantly connected to social media and technology is a condition called “compassion fatigue.” This condition is characterized by individuals who gradually begin to feel less compassion over time.

Generally, those who work with helping people or animals in distress experience this state of mind. Being exposed to breaking news, bad news and negativity on social media can lead individuals to develop compassion fatigue thus causing them to have a drastic shift in their personality.

McNaughton-Cassill thinks it is important for college students and millennials to consider how media exposure can adjust the way we look at the world.

“I urge students to spend at least some time everyday without any electronic input, and to turn their phones off while they are sleeping,” McNaughton-Cassill said. “It also helps to make sure you don’t have little lights from your phone, computers and chargers near your bed, since they can disrupt your circadian rhythms, which control sleep.”

She also thinks it is vital for college students and millennials to make time to spend with their friends and family without being distracted by their phones.

Some students have told her that they don’t like the fact that people don’t always commit to plans because they keep checking to see if they will get a better offer.

“Prior to cell phones, you had to meet with people in person at specified times, or you couldn’t find each other,” McNaughton-Cassill said.

Ultimately when it comes down to overcoming compassion fatigue, McNaughton-Cassill suggests finding a balance to technology.

“Social media enables us to stay in touch across time and distance, but it is not a substitute for interpersonal interactions,” she said. “Humans are social beings. We like to be with others when we are enjoying ourselves and when we are stressed. Using social media to build and maintain connections is one thing, but it can’t replace real interactions,” McNaughton-Cassill concluded.