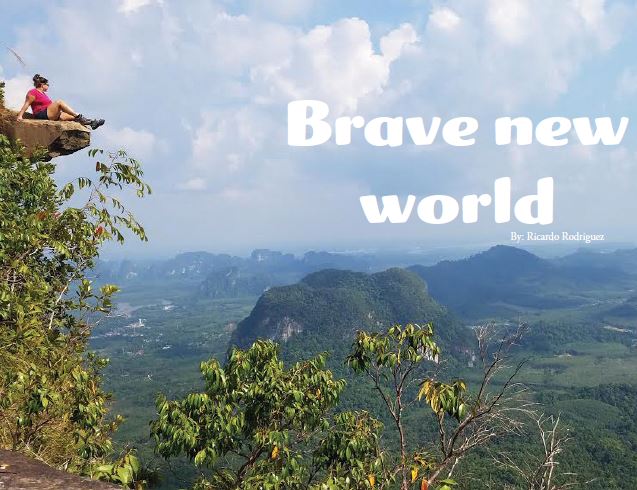 “One friend once told me, ‘AJ, you’re really comfortable with fear, and you don’t have to be.’”

Analicia Jaramillo, or AJ, is an extraordinarily brave woman who has had extraordinary experiences exploring the world. While AJ has never found travelling convenient, she sees it as a worthwhile pursuit that makes life worth remembering.

Many people are trapped in their jobs, watching life pass by through their cubicle. America values workers, like numbers on a spreadsheet, slaving away at their jobs, often at the expense of their happiness.

AJ still remembers the first time she delivered her letter of resignation a month before her five-week Southeast Asia trip. She had planned for a year, giving her boss advance notice, saving up money and arranging flights. When her boss turned her down, Aj’s mind was already made up.

“I went to my boyfriend and I said, ‘I’m not gonna let this job stop me.’ He was supportive and said, ‘Alright, let’s do it,’ and I quit my job. My employer was stunned.”

Many people in AJ’s life have tried to keep her from travelling. AJ grew up in a family that didn’t value travelling and saw foreign places as unsafe. When AJ became an adult, travel became a priority for her.

“This is a beautiful world to see, and I need to go see it. There’s never going to be a right time, there’s never gonna be enough money to do all of the things I want to do. So, sometimes you have to bite the bullet and go for it.”

Her first trip was visiting Greece. With little to no money to fund her trip, AJ was hesitant to travel to Greece knowing it would place her in debt.

“Everyone was telling me not to go, ‘don’t go to Greece. It’s unsafe, there’s a lot of turmoil there. But when I went there I had the best time, nothing negative. It was an absolutely beautiful experience with lovely people and amazing food and some of the most gorgeous sites I’ve ever seen in my life.”

For her, the beauty of other places and experiencing the strange and unusual gave her a renewed appreciation for life and for people. Something you can’t experience in a cubicle. Travelling offers exposure to different cultures, which often changes our view of these cultures we’ve only read about on our daily news feed.

On her recent Southeast Asia trip, AJ visited Thailand, Cambodia and Vietnam. One of her favorite memories was visiting Koh Yao Yai Village, a unique island in Thailand that is predominantly Muslim. Her experience visiting this beautiful isolated island made her aware of the fear tactics keeping people from travelling.

“I was worried I would have to be covered up, my shoulders or whatever would make me stick out as non-Muslims but that never happened. Nobody cared. Everyone coexisted and there was never any danger.”

After travelling so much, AJ hasn’t let fear lull her back to monotony and routine. Instead, it has motivated her to seek out exciting and thrilling experiences. AJ plans to visit Italy this year.

At the end of her interview, she gave advice for those who want to travel:

“Fear can absolutely paralyze you, but nobody is going to do it for you and, as scary as it is, you’ll be happy you did it. You’re not always going to be physically able to, so do it while you can.”