Why Didn’t You Say Anything Sooner? 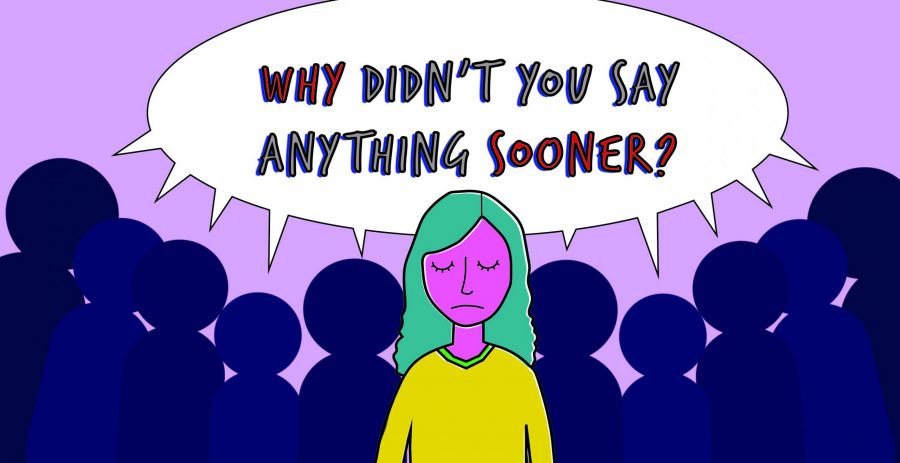 One of the first questions after someone has accused another person of sexual assault, harassment or misconduct is, “Why didn’t you say anything sooner?”

With many starting a dialogue about what it means to move past such harmful interactions, we have seen more open discussions about being on the receiving end of unwanted sexual attention. It is generally accepted that rape and sexual abuse are serious crimes, and their effects can be damaging in more ways than one, so why do people still expect a cookie-cutter response to an assault?

In 2017, several women came forward to accuse former Republican senate candidate Roy Moore of sexual misconduct. They alleged Moore had made sexual advances towards them when they were teenagers in the late ‘70s and early ‘80s. Decades later, the Washington Post broke the story when covering his campaign in Alabama. The first four women to come forward in the story were accused of being opportunists seeking attention at the height of Moore’s election when he was poised to win a seat in the majority Republican senate. This criticism comes with every high profile sexual assault and harassment allegation story that breaks. If it is not a “revolutionary” politician who is at risk of losing his seat; it’s usually a “talented” high-powered producer who’s been in the industry for decades or a “promising” young athlete who would have had a long career ahead of him. People are capable of doing horrible things to one another—we see it every day all over the news. One’s profession does not absolve them of this capability. Of course, the biggest proponents of the victim-as-opportunist theory love to argue, “If it really mattered, they would have said something about it sooner.”

More often than not, those who argue survivors should have spoken up sooner have never found themselves in a position where they were overpowered by another person and felt deeply uncomfortable or sexually violated. For some victims, it can feel like they let themselves down by not fighting back. For others, the experience might have made them feel responsible for causing it. There are many reasons survivors might delay disclosing their assault or harassment, and the general collective attitudes survivors face when coming forward don’t invite disclosure but more self-blame and revictimization.

I understand the need to avoid a practice of blindly believing every allegation that surfaces—what I am stressing is the importance of listening. Often times, one of the most devastating parts of sexual assault and harassment disclosure is the moment when victims are met not with empathy but with blame, suspicion, disbelief or some combination of all three. We hear these in the opinions of friends, family and the media. When it happens to us, why should we feel comfortable speaking up?

For those who are lucky enough to not know how any of these experiences feel and still feel the need to ask why some victims of sexual assault and harassment don’t speak up sooner, I have one answer: it’s because while you were busy setting the parameters for how they should respond to being personally and physically violated, you never made them feel safe enough to speak up in the first place. Don’t create a hostile environment that discourages disclosure and then become angry when survivors don’t speak up soon enough for your comfort.