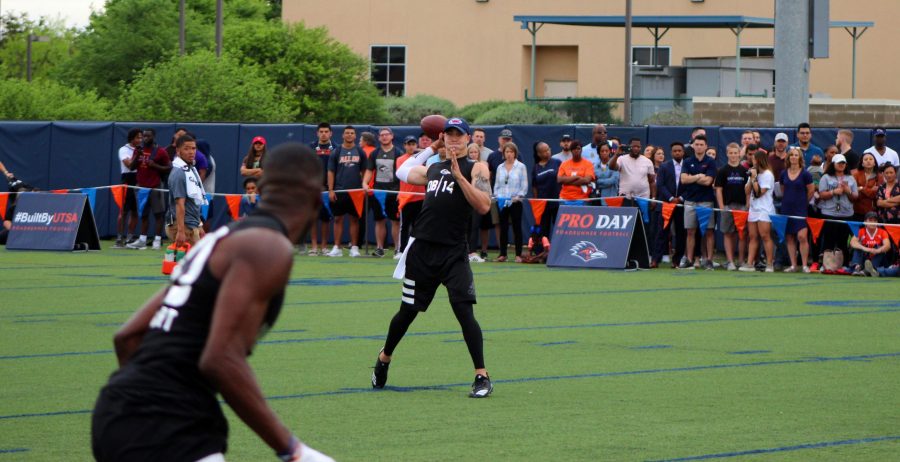 Quarterback Dalton Sturm throws to receiver Josh Stewart during his quarterback drill as friends and family look on. Courtesy of Ricky Galindo

Scouts and representatives from all 32 NFL teams made their way to the UTSA campus for UTSA’s pro day last Wednesday.

At the pro day, players from the Roadrunner football team performed various workouts and skill challenges for NFL scouts in the hopes that their talents might be noticed. In a sense, pro day is one of the biggest job interviews out there.

The possibility of a future professional football career depends largely upon how each player performs. With so much attention revolving around defensive end Marcus Davenport, other players on the team such as Dalton Sturm, Nate Gaines and Devron Davis were finally given the chance to prove themselves and show the NFL scouts what they’re capable of.

The day began in the weight room, where scouts watched each individual perform the broad jump, vertical jump and bench press. As expected, some athletes shined while others struggled.

Quarterback Dalton Sturm’s athleticism was on full display. Sturm impressed scouts with a 10’ 1” broad jump and a 34.5 inch vertical jump.

Sturm was not invited to the NFL scouting combine back in February like Davenport was, but both of those numbers would have placed first among all other quarterbacks at the combine.

His jump totals outshined the likes of projected first round picks such as Oklahoma’s Baker Mayfield and UCLA’s Josh Rosen. Sturm didn’t hesitate to generate a buzz about him among the scouts.

As the weight room workouts continued, wide receiver Brady Jones posted the best vertical jump of the day at 35.5 inches.

On the bench press, offensive lineman Austin Pratt carried out an astonishing 33 reps of 225 pounds as scouts looked on with approval at his arm strength.

Family and friends of the participating athletes lined the perimeter of the field in support. There was quite a crowd, and the athletes were no doubt feeling the pressure.

“It means a lot that my family would come out here to support me for my next step in my career,” Sturm said.

Having already done most of the drills at the combine, Davenport did not participate in them with the exception of  position drills. However, he still showed up hours before he had to go on the field to support his teammates.

“These guys are like my family and because of them I was able to grow into myself,” Davenport said about his teammates.

Nobody particularly shined in the 40-yard dash, but wide receiver Dannon Cavill posted the fastest time of the day with a 4.57 run. Cavill also posted team’s bests on both the 20 and 60-yard shuttle runs.

After a small hiccup in which he tripped twice on the 3-cone drill, it was time for Sturm to do some quarterback drills. Scouts huddled around with their clipboards to watch the former walk-on throw some passes.

Sturm’s footwork was consistent, and despite missing a couple of throws, he showed the scouts he could do what UTSA fans already know he does best — throw on the run.

“All I need is an opportunity,” Sturm said. “I think if I get my foot in the door I can open some eyes.”

Thanks to Davenport’s skill and popularity, UTSA football had their largest pro day in their short history. Players who have been overshadowed by Davenport’s dominance finally got their opportunity and it’s already paying off.

After the pro day, cornerback Devron Davis was invited to visit with the Denver Broncos and the Seattle Seahawks.

Overall, the UTSA pro day was a huge success. With all 32 team reps coming down to visit and scout players, chances are that at least a handful of them got noticed and will be given a chance. Perhaps Davenport won’t be the only draft pick from UTSA come later this month.