In Texas, falling behind on student loan payments can cost you your license to work 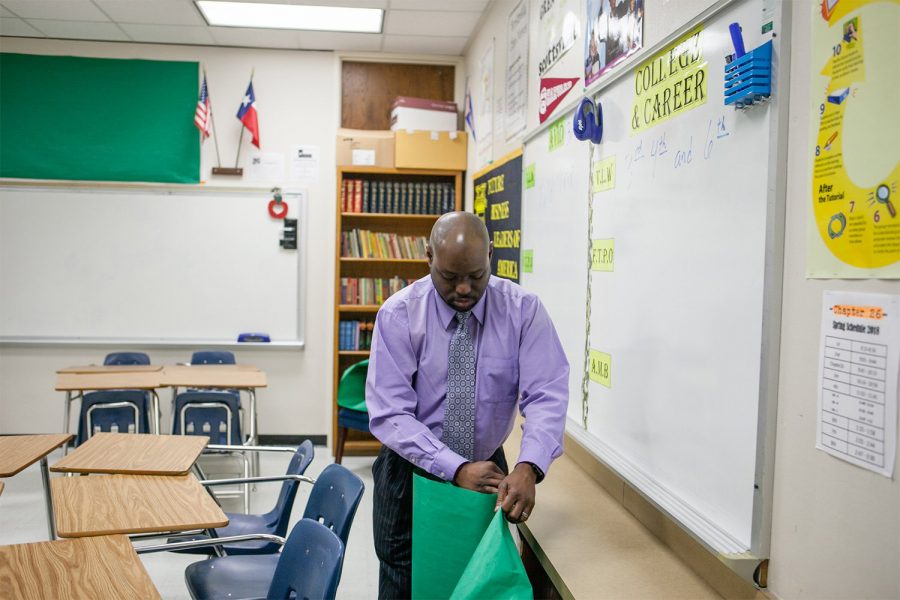 Roderick Scott, in his Dallas classroom on March 12, 2018 Courtesy of Leslie Boorhem-Stephenson for The Texas Tribune

When Roderick Scott Sr. submitted an application to renew his teacher’s license in the summer of 2015, he thought the matter was handled. He had no idea that, months later, a decades-old Texas law would nearly derail his career as a middle school teacher in north Dallas because he’d defaulted on his student loans.

Over the course of three years, Scott said he swiftly lost a “dream job,” was evicted, had his bank account garnished and eventually filed for bankruptcy.

He’s not the only one who’s suffered such dramatic repercussions. Texas is among several states that bars teachers, dentists, nurses and other professional license holders from renewing their licenses if they are in default on their student loans.

The ban was designed to push people to pay off their debt — or face the consequences. But even in Texas, a state that holds more than $70 billion of the country’s $1.3 trillion in outstanding student loans, critics call the practice counterproductive since it can impede people’s ability to work and make it even harder for them to pay back their debt.

There is no comprehensive source of data on how frequently this happens in Texas. Records from multiple organizations and agencies suggest more than 4,215 people in the state – including security guards, cosmetologists and pharmacists – were at risk of losing their license because of student loan default in 2017.

Since 2010, 530 nurses were unable to renew their licenses because they were in default on their student loans, according to information provided to The Texas Tribune through a public information request. And nearly 250 teachers, like Scott, had an application for a license renewal denied for this reason over the course of five years, data from the Texas Education Agency shows.

For Scott, 43, the first sign of trouble came one day in the fall of 2015. The school’s head of human resources called Scott into an office and asked why he hadn’t renewed his teacher’s license – a certification most Texas educators must have. Scott said he was confused. He’d submitted an online application and paid the fee to renew his license weeks ago. It took one frantic phone call to discover there was a major problem. Scott’s renewal hadn’t been processed because he had fallen behind on his loan payments, and he quickly realized he was about to lose his best chance of getting back on track: his job as a teacher.

The practice in Texas dates back to 1989, when the Legislature passed a bill making loan default grounds for not renewing a license. At the time, Texas was experiencing historically high rates of student loan default, much of it coming from a burgeoning sector of lightly-regulated for-profit schools. Suspending professional licenses, state staff said then, could create “a powerful incentive for a person to stay current on his payments.”

Already, lenders and loan guarantors had an array of financial hammers they could use to jolt borrowers into repayment. Tom Melecki, a long-time financial aid officer, said the rationale for the law might have been that it could be another “effective tool at kind of bludgeoning [borrowers] back into repayment.” Members of the state commission that helped pass the law are deceased, could not be reached or did not remember details about its passage. But a legislative liaison who met with government staff about the law said he recalls thinking that it “wouldn’t really address the problem” of defaults in the for profit sector.

“It may be helpful, but the defaults you see out there are largely among those who went to private trade schools and who probably didn’t get certified in what they went to school to be,” said George Torres, then the governmental relations director for the Texas Guaranteed Student Loan Corporation, a public nonprofit that’s since been privatized and renamed Trellis Company.

Suspending licenses penalized a different group of students, he said – those who’d graduated, gotten a certification, and had a lower risk of not paying back their loans. Still, Torres said, it was a tool proposed by legislative staff — one that could be fine-tuned later, if needed. “The money is needed around the house” The threat of losing his license — and therefore his job — pushed Scott, the Dallas middle school teacher, to take drastic action.

He immediately paid the loan collector — borrowing money to do so — and entered into a repayment plan that let him keep his license. But during the time it took him to sort out the paperwork, his students were moved to a different teacher and he lost a department-chair position that came with an added stipend – making it even harder to make the loan payments, he said. Scott then made a string of financial sacrifices to afford the more than $300-a-month payment his loan collector asked for.

He put the loan payment before rent and other bills. He was evicted, stayed with his brother and considered setting up a GoFundMe page to help ends meet. He tried to hide the trouble from his students, and from his 11-year-old and 3-year-old kids.

“I just did not have that discretionary amount available,” Scott said. “If I was single, it probably wouldn’t have mattered. But, you know, being married and having children, it’s a different story. The money is needed around the house.”