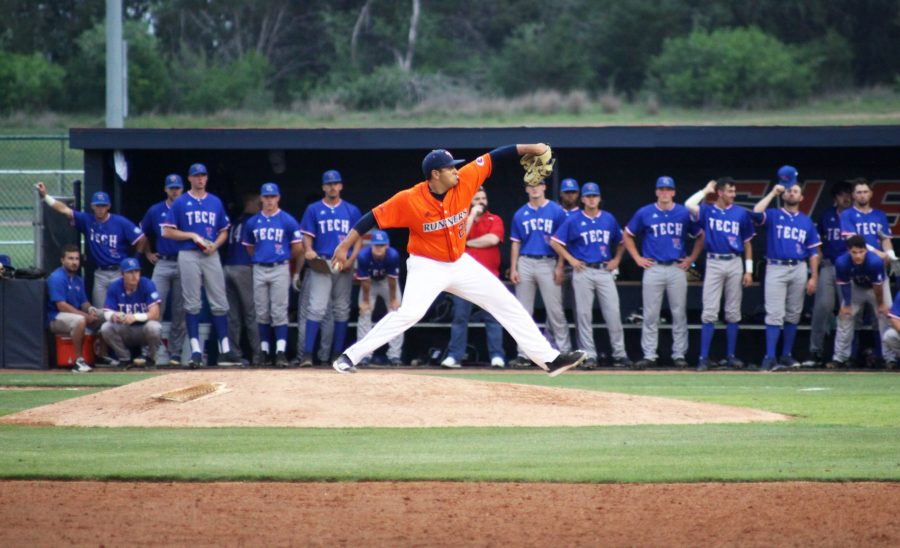 UTSA baseball was red hot coming into the weekend series against Louisiana Tech, having won eight of their last nine games. However, the ‘Runners had quite the challenge in front of them, as the LA Tech Bulldogs are 24-10 and are ranked 22nd in the nation. The Bulldogs are without a doubt one of the best teams in Conference-USA. The series didn’t disappoint in terms of excitement, but UTSA came up on the losing end of things in two of the three games.

After a slim victory over Texas State earlier in the week, the ‘Runners were hoping to ride their momentum into game one of the LA Tech series on April 6. Quite a few fans came out to the game, setting a new facility record with an attendance of 836 at Roadrunner Field.

Early in the ballgame, UTSA jumped out to a quick 2-0 lead after Tony Beam and Chris Estrada both hit sacrifice flies in their at-bats to bring home a couple of runs.

In the bottom of the third inning, UTSA extended the lead to 5-0 by way of a wild pitch followed by a two-RBI base hit by Tony Beam. After the first three innings, it looked like UTSA was on the verge of running away with the ballgame; however, LA Tech’s bats came alive, and they began to chip away at the lead.

In the fourth inning, LA Tech shortstop Dalton Skelton launched a home run over the right field fence to fire up the Bulldogs and give LA Tech a little bit of momentum.

UTSA starting pitcher Karen Patel had been solid through the first three innings, but after giving up the home run to Skelton, he began to look a little shaky as he headed into the fifth inning. After a pair of throwing errors and a couple of base hits, the Bulldogs were able to cut the lead to just one with a score of 5-4. UTSA headed to the bullpen to replace Patel on the mound.

LA Tech left fielder Mason Mallard proved to be a thorn in UTSA’s side. Mallard went 3-5 at the plate with four RBI’s and helped the Bulldogs take an 8-5 lead over UTSA in the eighth inning.

The ‘Runners were able to earn a couple of runs back in the bottom of the eighth inning to get within one, but they were unable to complete the comeback in the ninth. UTSA fell by a score of 8-7.

Game two was even more exciting than game one, and UTSA was able to win it in walk-off fashion in 11 innings.

Steven Dressler took the mound for the ‘Runners, and he logged his sixth quality start of the season. Dressler pitched all the way into the eighth inning while only giving up three runs on four hits and striking out three. However, he turned the ball over to reliever Derek Craft with the score knotted at three, so he would not get credited with the win.

With UTSA leading 3-1 in the top of the eighth, Mason Mallard of LA Tech hit a base hit to left field to bring in two and tie the game. With neither team able to score in the ninth, the game headed into extra innings.

Derek Craft was stellar in his relief appearance and didn’t allow a single run in his 2.1 innings pitched. After keeping LA Tech off the board in the top of the 11th inning, Craft gave UTSA the opportunity to walk it off.

Joshua Lamb of UTSA smacked a double to lead off the 11th inning and get things started. After the next batter was hit by a pitch and second baseman Bryan Arias walked, the ‘Runners suddenly had bases loaded with no outs. UTSA first baseman Ben Brookover wasted no time and sent a base hit into left field to win the game by a score of 4-3. The team stormed the field to celebrate their first extra-inning walk-off win since 2016.

Although the third game was a 13-0 blowout loss, UTSA is still 9-3 over their past 12 games and will continue the season Tuesday, April 10, at home in a matchup against Stephen F. Austin.