Athlete of the week: Trent Bowles 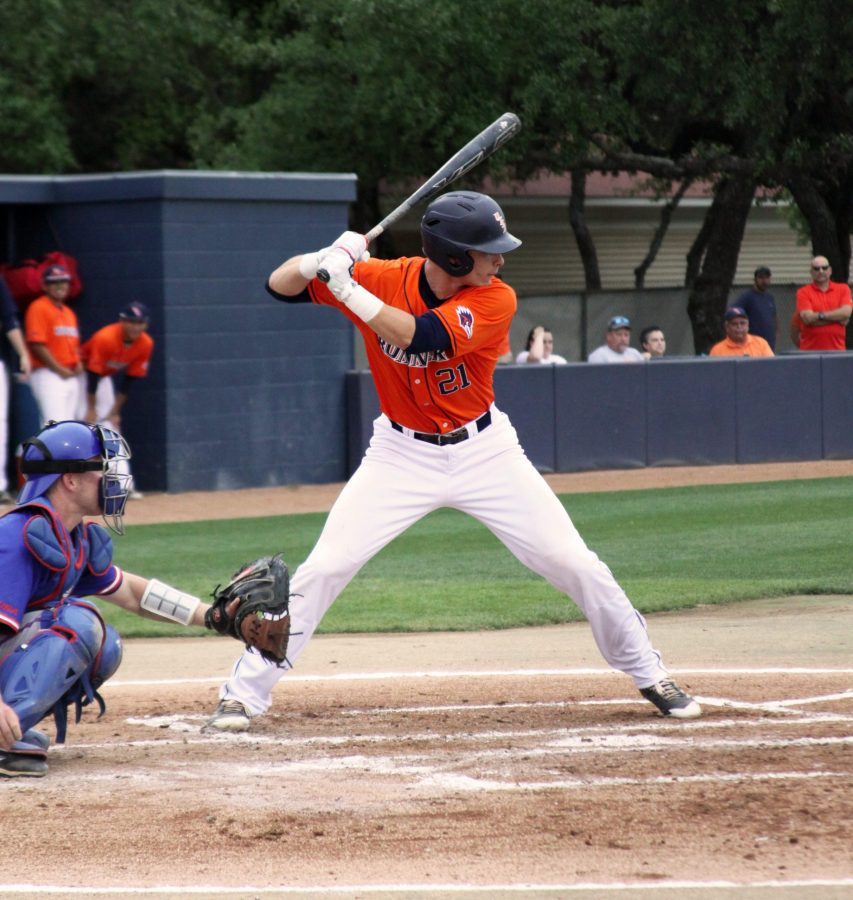 Trent Bowles loads up in the batters box before the pitch. Corina Garcia Young/The Paisano.

When a person starts an endeavor, they are unsure about where they may end up. At times, they may feel lost or afraid, but what keeps them going is their struggle, pain and passion for obtaining their dreams. For Trent Bowles, an outfielder for UTSA’s baseball team, the dream is to play major league baseball.

Bowles is a senior multidisciplinaires major at UTSA. His dream of becoming a major league baseball player began when he attended his first baseball game, and he has not looked back since.

“I went to an Astros game when I was a little kid, and since that moment I fell in love with baseball. I was like, ‘I want to be like one of those guys one day’,” Bowles said.

Growing up in Katy, Texas, Bowles started to play the game when he was four or five years old, and his love for the game is the reason he has continued to play.

“I have been playing for 17-18 years,” Bowles said. “Strong passion and a love for the game, and it’s so much fun are the reasons I decided to stick with it.”

“I hit a walk-off grand slam in the playoffs. It was the first time we had been in the playoffs in a long long time. So, it was pretty memorable and an emotional moment not just for myself but for the whole program,” Bowles said. “There’s no words to describe that feeling. It was just fantastic.”

Outside of playing baseball, Bowles has two different passions. “In high school I played football, so besides baseball, football is my favorite sport. My favorite team is the Dallas Cowboys, and I enjoy watching them. I am a big Jason Witten and Cole Beasley fan. I love the way they play the game,” Bowles said.

“I love the outdoors. I am an extreme sportsman. Hunting, fishing, hiking, whatever has to do with the outdoors, that’s another passion of mine. I would say you could call hunting and fishing my hidden talent, since I had to teach myself.”

“First, I love the San Antonio area. My family and I love it. I also love the coaches. Coach Marshall is a great man and he has done well with this program. Coach Blair is an unbelievable coach too. He’s one of the best coaches I have ever had. According to Bowles, baseball has had such a profound impact on his life, that he hopes to give back to the game.
“Hopefully one day I can do what these coaches out here do. I just want to find a way to make an impact on someone’s life the way Coach Marshall and Coach Blair have impacted mine. So that’s my biggest goal,” Bowles said.
Accodring to Bowles, joining the talented UTSA team changed him for the better.

“Little did I know these guys are really good too. It gave me a reality check really quick, and it taught me to be humbled coming out of high school. It also taught me how to be a man. It helped me grow up. I am really thankful and forever grateful for the game of baseball for giving that to me.”

For Bowles, baseball has played an important role in his life. He believes it is the hardest sport to play, but the ups and the downs of the game are why he loves it, and that love for the game makes him keep fighting to obtain his ultimate goal, which is to play until he is unable to play anymore.