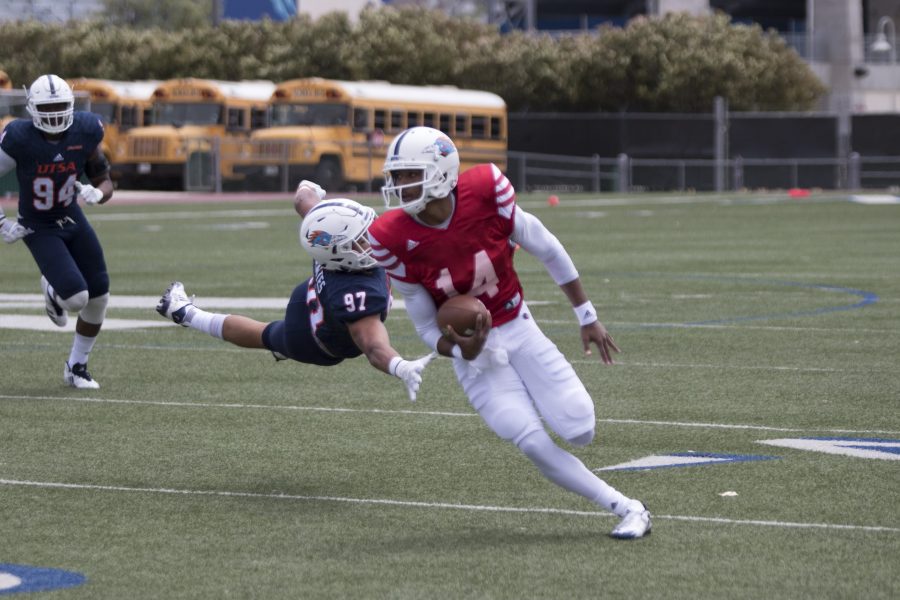 For the families attending, there were events before the game, such as bean-bag tosses and inflatable bounce house races. Game-worn jerseys were also available for purchase along with other UTSA gear.

“I thought the energy was good, and I thought our fans were engaged. It was good, it was festive and it was community. That’s what we design this day to be,” Head Coach Frank Wilson said.

The festivities began with the notorious bird cage drill. The bird cage is a segment of practice that consists of an offense vs. defense one-on-one matchup surrounded by their teammates. After the bird cage, the team worked on their special teams and did some kickoff drills to get everyone hyped up.

After everyone had gotten some playing time in, the team had some more special teams work as the punt team and punt return team took some reps.

When that segment ended, the second quarter began. This quarter consisted of a missed field goal due to heavy wind and another defensive stop.

At halftime, the Roadrunners went into their seven-on-seven drill, so they could get non-contact work in and keep everyone’s legs warmed up. Soon after, the seniors from the 2017-2018 team made their way to the field for a special ceremony. The seniors would get their own customized framed jerseys and were introduced on the 50-yard line, where they took a picture with Head Coach Frank Wilson and Athletic Director Lisa Campos.

The third quarter kicked off with some wide receiver vs. defensive back one-on-one matchups and after that, the scrimmage was in full swing in the second half. The offense gained some momentum after a kick return for a touchdown from wide receiver Dadrian Taylor.

Quarterbacks Bryce Rivers and Brandon Garza each got a passing touchdown in the second half. Running back B.J. Daniels ended the scrimmage with the play of the day as well as the team’s only big run, scoring on a 25-yard rush as he hurdled a defender and broke two tackles to get into the end-zone.

The defensive-line looked strong as they got a dozen sacks. Defensive lineman Lorenzo Dantzler said, “We’ve been working to get better every day.”

The passing game on offense was shaky at first as the Quarterbacks adjusted to the wind, but once they adjusted the air attack started picking up.

“We’ve got a couple things we need to clean up, but for the most part everything was looking good,” quarterback Bryce Rivers said.

“This is just the beginning. A lot of progression is to be done,” running back B.J. Daniels said about the team heading into the summer.

As the team ends their spring work together, fans from all over are excited to see what the Roadrunners have in store for the 2018-2019 football season.