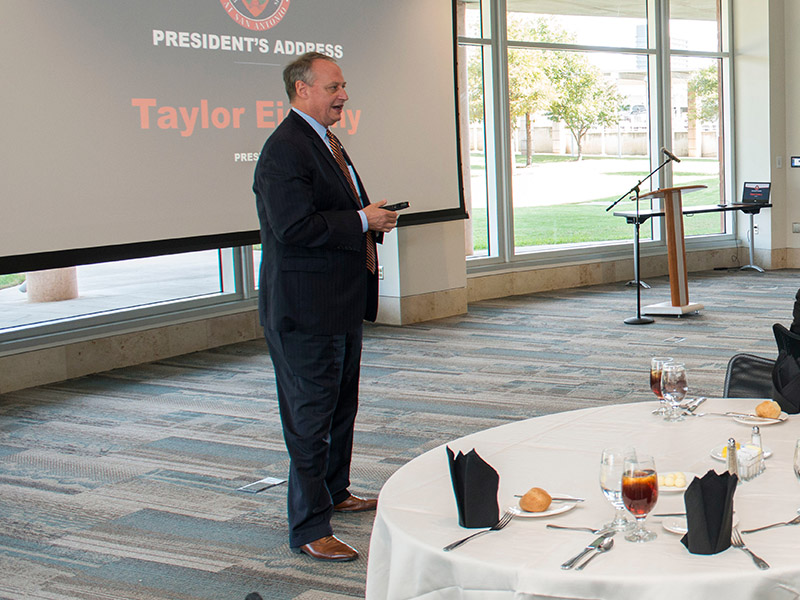 “My goal is to shape a highly collaborative leadership team where each vice president has multiple points of commonality and shared goals,” Eighmy said.

Dr. Rhonda M. Gonzales, interim vice president for student success, will chair the search for the Vice President for Inclusive Excellence, which was created from the input given in a faculty and staff climate survey released last fall.

“In addition to a specific question asking about the value of such a position, there were a number of additional comments further encouraging the creation of the role to support a cohesive approach to creating a culture of inclusiveness which, in turn, helps drive student success,” Joe Izbrand, associate vice president of communications and marketing, said.

Once selected, the Vice President for Inclusive Excellence will work with efforts pertaining to diversity and inclusion on campus.

“This individual will serve as a leadership anchor, helping us to shape policies, set goals and provide strategic direction for the journey toward improving our campus climate for underrepresented groups,” Eighmy said.

“The reframing of this position reflects the growing importance of information management, systems and integrity at Carnegie R1 universities,” Eighmy said.

The Vice President for Information Management will repor directly to Eighmy and will be responsible for overseeing the office of information technology (OIT) operations, charting the technological future for UTSA and developing and implementing information management and technology strategic plans.Currently, there are no candidates for either position. Eighmy expressed his hope for having these two positions filled by the beginning of the fall semester.

According to Izbrand, the university is looking for individuals who share UTSA’s core values and vision.

“The university is conducting a nationwide search to ensure that the best candidates are identified for these positions,” Izbrand said.

More information about these two positions is expected to be released within the next few weeks.