A new age of drag 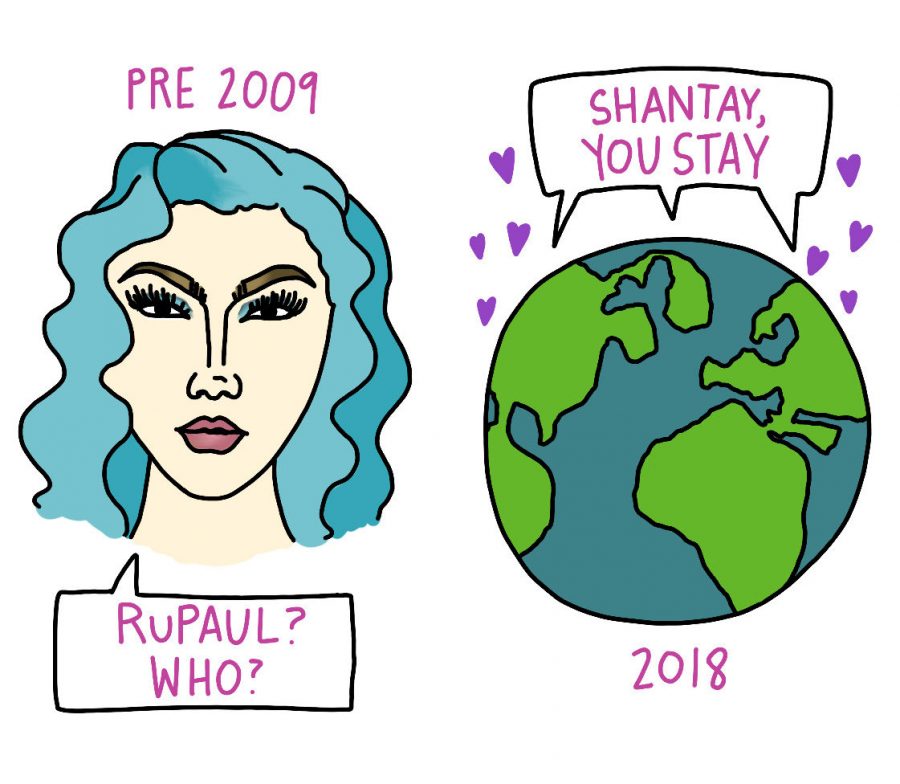 How Ru Paul’s Drag Race is redefining drag as we know it.

Started in 2009, Ru Paul’s Drag Race has paved the way for how drag is perceived today. Before Drag Race, drag was underground and almost exclusive to the LGBTQ community. Now, we see prominent drag references throughout pop culture and mainstream media.

As Ru Paul’s Drag Race enters its 10th season, drag is more prominent than ever. The show has launched the careers of hundreds of queens and continues to do so through the platform the show has created.

With the raging success of the show, local drag queens across the United States have seen growth in the turnout for their performances.

Drag Race has created exposure for the drag community overall, and people have started to come out and support their local drag queens.

Every contestant on Drag Race or “Ru Girl” started out performing in their local gay bars and clubs, so after gaining exposure on the show they do their best to give back to local queens.

“I’ve known some of my drag sisters, who are seamstresses, designing costumes for Ru Girls. When a Ru Girl gets asked who she’s wearing, they always give credit to my friend, and it helps them get more clients, and in turn, they make more money,” local San Antonio queen and UTSA alumna Lolita Red said.

Drag Race provides its contestants with expensive, high quality materials to create looks to push them forward in the competition.

This may seem unrealistic in comparison to the looks local queens produce, as many local queens do drag as a full time job to support themselves.

Many queens, especially up and coming queens, cannot afford to have a brand new look every time they perform, whereas on Drag Race they create multiple new looks within each episode.

Even though Ru Girls may seem to have an unfair advantage, “they know how expensive drag can be and how little some local queens make.

Drag Race helps local queens think creatively and make use of the budget they have,” Lolita Red said.

Drag Race has given LGBTQ individuals a platform on national television, creating the normalization of queer culture. This has helped create a safer environment for drag performers across the country, as previously, drag could be dangerous due to the lack of exposure of the drag art form.

As drag has become more accepted, it’s become more common to see drag queens in public and in the media. For instance, Ada Vox, a queen from San Antonio, has made it to the top 14 contestants on the current season of American Idol.

The success of Ru Paul’s Drag Race has grown exponentially in the past 10 years and has made a significant appearance in mainstream media. Drag terms like “yass queen,” “work,” “sickening” and “no tea no shade” have become a part of many younger voices’ vocabularies.

Drag references are becoming a part of common culture and bringing people together with Drag Race memes and viewing parties.

What used to be exclusive to the LGBTQ community is now being enjoyed by the masses.

Ru Paul’s Drag Race will likely continue to grow and benefit both Ru Girls and local queens by inspiring them as well as helping them create lasting careers. Drag Race is defining the generation with its hilarious challenges, breathtaking looks and multi-faceted queens.