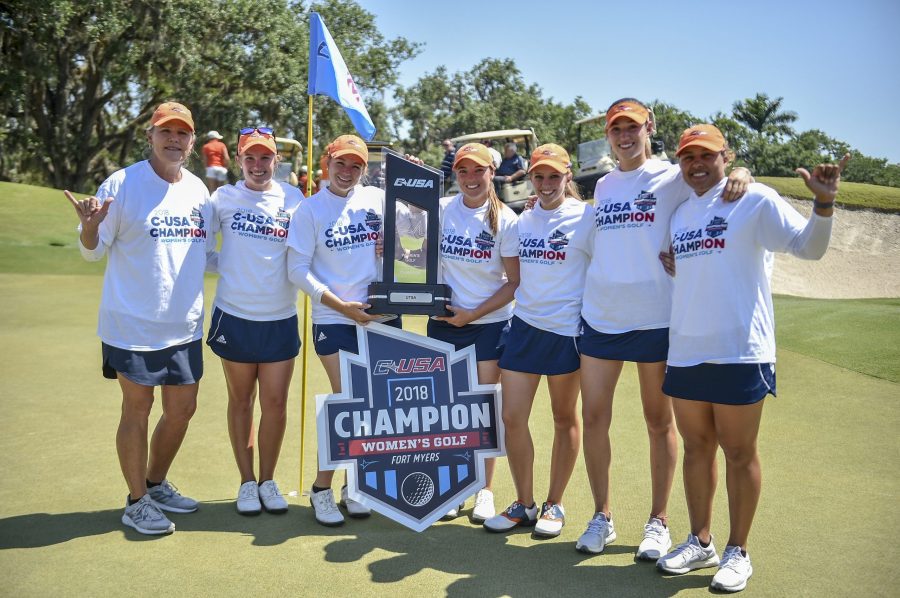 The team hoists their championship trophy after the win. Photo courtesy of Conference-USA

After finishing the 2016-2017 season with a third-place finish at the Conference-USA tournament, UTSA had their sights set on the championship as they headed to Fort Myers, Florida for the 2017-2018 C-USA tournament on April 16. Throughout the three-day tournament, UTSA dominated the course and came away with the victory by a margin of 13 strokes to take home their first conference title since 2012 and their first ever C-USA title.

The team victory was due in large part to the phenomenal play of junior Julie Houston and freshman Ana Gonzalez. The UTSA duo earned first and second place individually in the conference tournament to help lead the team to the win. Gonzalez and Houston were the only two players in the tournament to finish under par with scores of -3 and -4 respectively. Hanley Long from Middle Tennessee rounded out the top three with a +1.

UTSA played well enough the first two days to give themselves a slim lead heading into the final day of the tournament. With the ‘Runners holding a four-stroke lead, they were going to have to work hard to maintain it.

“We’ve seen what we can do, and we can do it again. We aspire to win conference again.” – Julie Houston

“The team mindset going into the final day was definitely just to stay focused and stay in the present,” Houston said. “It’s easy to get ahead of yourself and start picturing the moment when you win and stuff like that, but everyone stayed focused and did very well.”

While the team had a four-stroke lead, Houston and Gonzalez were tied with each other heading into the last day and both were well within reach of the first-place trophy. The two ran away with the lead on the final day of play, but Houston was able to edge out her teammate by one stroke to earn the first-place trophy. Houston said being neck and neck atop the leaderboard helped them bring out the best in each other.

“We’ve both pushed each other all year long to play our best, and Ana is an amazing teammate to have,” Houston said about Gonzalez. “I wouldn’t have wanted to go head to head with anyone else.”

Houston led the field with 13 made birdies over the course of the tournament and had four of them in a row on her way to shooting a 69 the final day.

“To win as a team is such a great feeling and to win individually as well was so amazing and so humbling,” Houston said. “It really put all my hard work in perspective.”

While Houston and Gonzalez were no doubt the stars of the tournament, the rest of the UTSA team didn’t disappoint either. There were 60 players at the C-USA tournament, and not a single player from UTSA finished outside of the top 30. Becky McGeehan finished in 23rd with a score of +10 and Madison Kidd finished tied for 25th with a +12. Senior Nikki Long rounded out the group of UTSA women one stroke behind Kidd with +13 and finished tied for 27th. It was an impressive showing from every individual on the team.

While winning conference is exciting and a huge accomplishment, the UTSA women’s golf team will now have the opportunity to compete in the regional tournament in May, so the ride isn’t over yet.

“We’re still focused and practicing for regionals, but we are still very excited that we won conference and aren’t overlooking that at all,” Houston said.

Once the regional competition is said and done, Houston will have her senior year to look forward to. She already has big expectations for herself and the team for the 2018-2019 season.

“We’ve seen what we can do, and we can do it again. We aspire to win conference again,” said Houston. “I want to give myself a chance to win every tournament I play in and of course defend my conference title for my senior year.”

The team will have some new faces next year after the departure of seniors Nikki Long and Becky McGeehan, but under the leadership of new Head Coach Summer Batiste and veteran Julie Houston, there could be big things in store for next years’ squad.