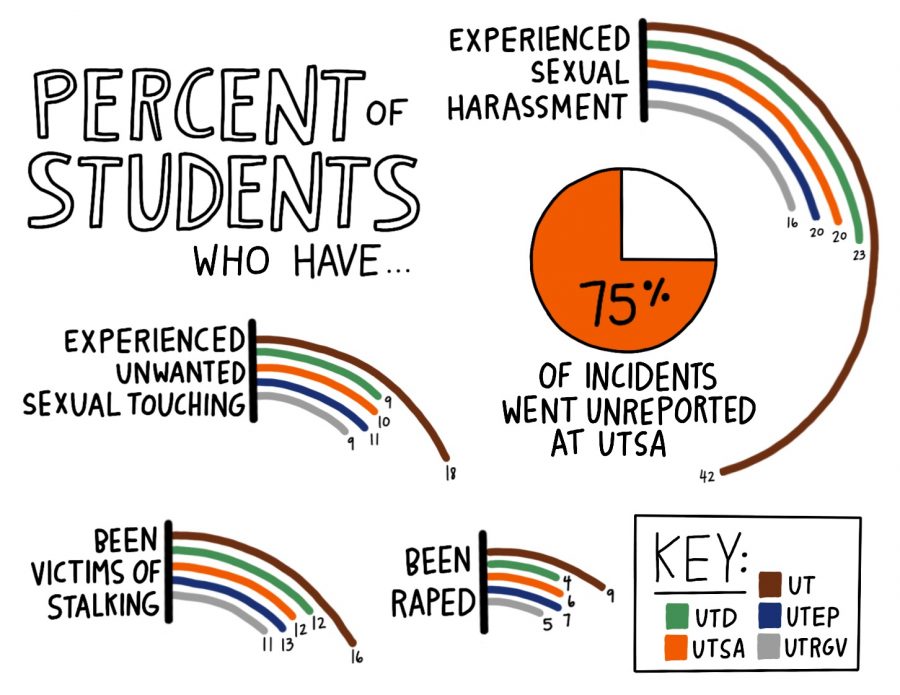 The full report is supplemented by results from the UTSA CLASE survey, released Mar. 24, 2017, in which 3,385 UTSA students participated, a 13.8 percent response rate. According to a UTSA Today article from Mar. 24, 2017, students were asked to self-report their experiences in five areas. Thirteen out of 14 UT System institutions participated in the CLASE survey.

Referring to the students who have experienced gender harassment by faculty or staff members, Kalinec-Craig said, “For us, 11 percent is 11 percent too much. It should be none. If there is anything above zero, that should be raising alarms.”

The Faculty Senate was approached by Provost C. Mauli Agrawal to convene a small task force to examine the CLASE report. Kalinec-Craig says the subcommittee will focus on faculty involvement in preventing sexual violence on campus.

“We need to make sure this is a sustainable effort. Long past whenever (affected) students graduate,” Kalinec-Craig said. “If we just look at it as a quick, band-aid fix of it, if and when (sexual violence) happens, that’s not thinking of it in a long-term, holistic perspective.”

“If there’s a general sexist climate, that increases the likelihood that individuals will act out and behave in inappropriate ways,” Harris said. “If sexism is prevalent, people who could potentially be perpetrators are more likely to act out.

“We have more capacity to control that context than we do to control individuals.”

Harris believes that the subcommittee’s recommendations will lead to changing these environments.

“I see attitudinal change, the culture change, as something that emerges from effective implementation of policy,” Harris said. “In the short term, we can shape that environment much more quickly and readily than we can shape attitudes.”

Though the recommendations have not yet been approved by the Faculty Senate’s executive committee, Harris says there will likely be harder sanctions on perpetrators of sexual violence on campus.