Net Neutrality: who owns the Internet? 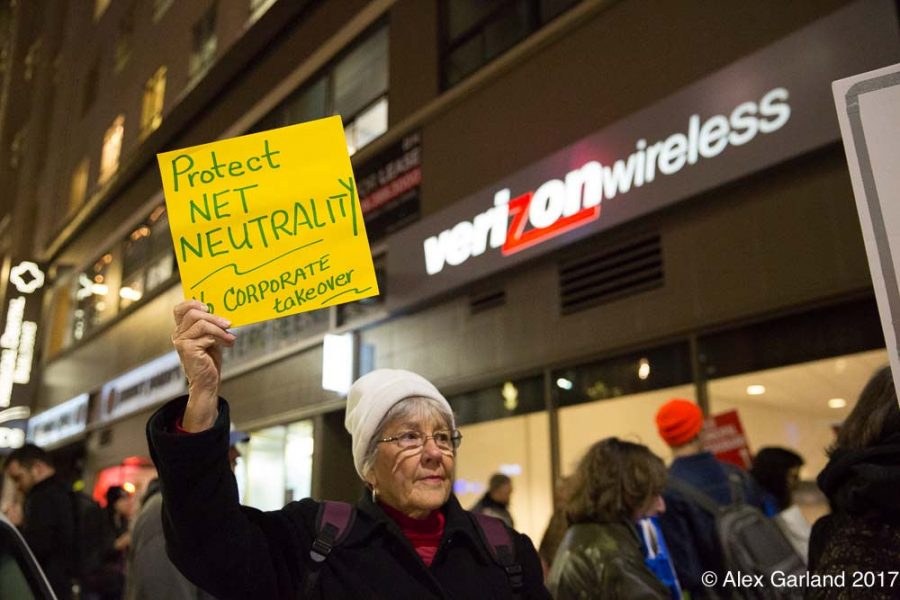 We love net neutrality action at Verizon, which is one of over 600 actions outside of Verizon stores. Photo courtesy of Alex Garland

The status of the future of the Internet
The Internet – A digital ecosystem many people call home.

A place where trolls, memes, conspiracy videos and older relatives still poking you on Facebook live in harmony.

We are able to access this great resource to communicate with family members, create social events, access information, pay our bills, complete workloads, etc.  We all can freely use the Internet in one of these ways or another; however, this could all change very soon due to decisions made on net neutrality.

This is due to the decision made by the Federal Communications Commission (FCC), headed by Republican leader Ajit Pai, to rollback net neutrality rules established by the Obama administration in 2015.

Here’s what you need to know: net neutrality is the system that allows consumers to freely surf the Internet however they please, without the interference of Internet Service Providers (ISP). The FCC’s decision to rollback these rules will take effect June 11. Democrats are advocating for the preservation of net neutrality regulation, and if they are right about the long-term effects, this could potentially be the biggest thing to happen to the Internet in Trump’s tenure since Logan Paul.

The majority-Republican commission says that removing net neutrality rules will actually save the Internet. The Internet lasted and thrived well from its conception to 2015 when the Obama administration established rules protecting internet users. The FCC argues the current net neutrality regulations and government oversight restricts the market from prospering. Ideally, an Internet company such as Netflix may pay an ISP more money in return for faster speeds and better quality service. If ISPs abuse their power by discriminating against certain Internet companies, the natural response from consumers to this maleficence is, simply, switch ISPs, thus, eliminating the problem. Republicans have adopted this agenda as it adheres to their pro-small government rhetoric.

Democrats argue this change is a lucrative scheme is seeking to benefit corporate cable entities and the politicians who are lobbied by them. This change also affects small businesses who are just starting up; nothing would be able to stop cable companies from blocking their data from reaching consumers if they posed a threat.

Internet users could be subject to severe consequences of net neutrality’s end. Let’s say Verizon, an ISP, is business partners with Hulu. However, you prefer to subscribe to Netflix’ streaming services. Legally, Verizon could have the authority to slow down the loading speeds of the content on Netflix  to coerce you to buy a Hulu subscription. Naturally, the response is to switch Internet providers. But, according to the FCC’s own data, if you are one of the 129 million Americans that who have only one option for broadband Internet service in your area, in the words of Logan Paul, “so sorry.”

If net neutrality and its governing rules go away, ISPs can discriminate against certain content and data for their own financial gain. Being able to access some of your favorite websites may require fees or having to endure slow loading speeds.

However, the fight for a free and open Internet is not over yet. Millions of people have taken to their devices to raise awareness. Posts and memes combatting the FCC’s decision have found their way into feeds across all media platforms. Some of these posts going viral due to their comedic mockery of the FCC chairman Ajit Pai and his obnoxiously oversized coffee mug he touts in almost every interview with a camera. Even silly jokes on social media have sparked interests in many young people who don’t pay attention to politics, but even they realize the gravity of what is at stake.

On May 16, the U.S. Senate nullified the FCC’s decision to overhaul network freedom rules. This was a major victory for Internet users, consumers and content companies. The decision was passed 52-47 with the vast majority of Republicans voting to support the FCC’s decision. The Democrats took the victory with the help of a few moderate Republicans. Supporters of this movement include technology giants such as Google, Amazon, Facebook and others that have advocated for the preservation of net neutrality regulation.

The next step for those trying to save net neutrality is repealing the decision in the House of Representatives. For Democrats, this will be very challenging due to the overwhelming Republican control of the House. Advocacy for the preservation of net neutrality is rising across the country from both sides of the political spectrum. Democrats are going to have to try and convince the GOP that they have to listen to the voices of their constituents rather than the agenda of big corporations.