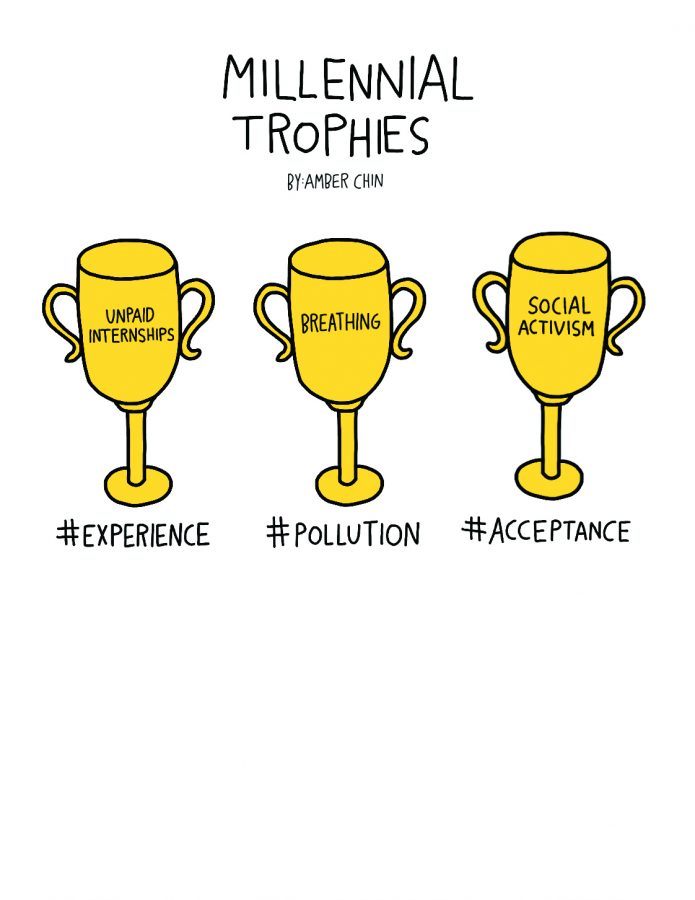 Millennials face growing stress of high expectations placed by society.
A common misconception is that these “new-coming” generations have everything handed to them. The irony is, millennials have the most onerous burden that others cannot fathom and expectations that are more than a little ridiculous.

Both sides (baby boomers and millennials) seem to have contradicting views on the subject. Jubilee, a public debate account on YouTube, has had this very same argument. “A baby boomer is somebody who was taught to work hard, and if you want something, you have to figure out how to go get it rather than someone handing it to you.”

Although isn’t it the same for any generation, or anything in general? There will always be people who take advantage of the system and there will still be people that will find whatever reason they can to not work. This could be a reason as to why expectations are so high.

The ever-declining pool of jobs is alarming as the world continues to advance with automation and technology. A survey would show that incoming college students have a consuming desire for luxury, but lack the will to work for them. Two out of the three baby boomers interviewed for this article say that the high expectations come from being “old school.” But, the reality is that not all baby boomers integrate and take into consideration that it is a new society.

In their prime, boomers grew up in a very black and white picture where the grey was little to non-existent. Whereas today’s society, the whole film is grey with spots of white and black splattered in indiscriminate placements.

Millennials have a completely different point of view for the new generation. Millennials believe in opportunity and believe in their ability to strive to achieve those opportunities unconditionally.

Honor students at the university think that it is “not easy at all” to meet their quota, and believe it or not, it is not due to their capabilities. The genuine difficulty is finding the motivation to continue to earn the honor’s status when those achievements become expectations. “We are put on a moral pedestal to do well and rise above the majority, yet, we are given the same resources.” An honor student stated that the expectations can be overbearing, especially when the ‘cookie cutter’ stereotype becomes the expected. If honor students, the top tier of our society, seen as the most intellectual and mature, agree that it’s too hard, how can it be expected from the ‘lower tiers’?

So, why is it so difficult to integrate into the work force with these new developments and new opportunities to be successors of the past generations? This question seems to resonate in the essence of the millennials themselves, not only that, but new opportunities do not equal further and greater success. “Because we were put under a ‘glass ceiling’ as children we never really experienced an honest day’s work,” said a UTSA sophomore student, who is currently in the job hunting process.

Today’s employers want that experience, and since those opportunities are not extended to the newer generations, it is a lot harder to find a job, much less hold a position. Employers also want college degrees and hours.

Baby boomers were not required to have these in their prime. Speaking of which, a lot of people are dropping out of college because their families are not fortunate enough or capable of investing in the money for their college degree; because due to the contrary belief, college is expensive. Which it wasn’t back in the prime of the baby boomers.

The pressure is existent for millennials and is so overpowering, that achievements have become expectations and the standard for success is as unreachable as the Moon while standing on the Earth.