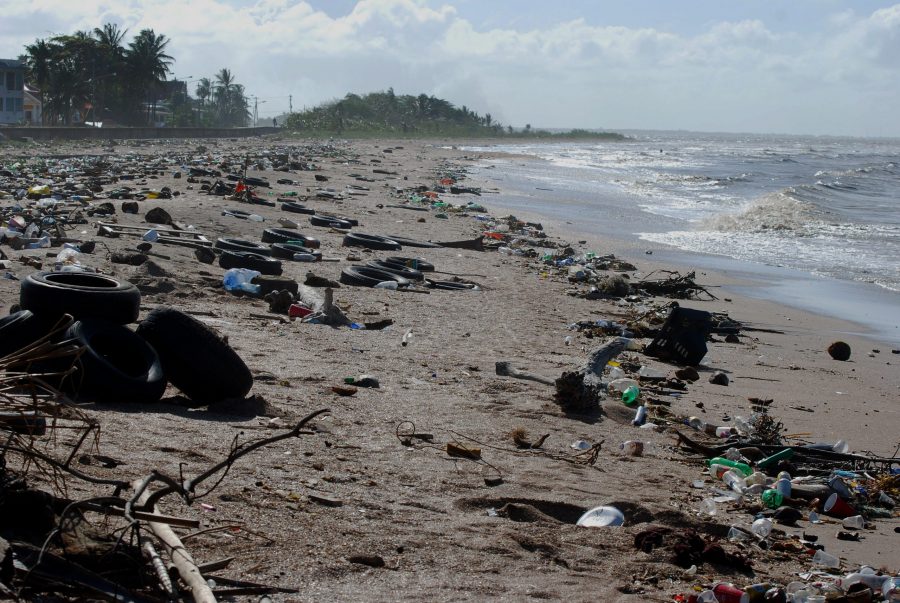 The beaches of Guyana littered with tires and waste. Photo courtesy of Creative Commons

The recent fad of reducing plastic straw usage draws attention to larger ocean waste.
Recently, social media has been filled with images and videos of beaches covered in plastic, as well as sea animals washed ashore dead with their stomachs filled with plastic.

Of the 260 million tons of plastic produced each year, only 10 percent of that will end up in the oceans. In 2018, the amount of plastic polluting the oceans has become a hot topic.

This has led to a mainstream push from people to become aware of their plastic use. The main focus of these protests has been one-use plastic straws.

At the beginning of July, 2018, Seattle became the largest city to ban plastic straws, soon to be followed by many other cities like Miami Beach, New York City and Portland, as well as legislators in California and Hawaii introducing straw restriction proposals.

While there are alternatives to plastic drinking straws, like paper straws, pasta straws, silicone straws and metal straws, they all have their own accessibility issues for people with disabilities. Not all disabled individuals have the funds to afford these straws.

If they can afford it, it is another thing that people with disabilities would have to remember to bring along with them when they go out into public spaces. And, if they forget to bring their own straw to a place that doesn’t offer straws, that could disable them from being able to eat or drink. Reusable straws need to be cleaned and sanitized, which would be difficult for people who do not have full mobility. And, straws made of paper and pasta get soggy and fall apart if left in liquid too long.

This push for plastic-use awareness has been amazing, but it should not ignore people with disabilities. Nor should it ignore the fact that the majority of plastic polluting the oceans is not plastic bottles and straws, but abandoned fishing gear.

Of the 79,000 metric tons of plastic in the Great Pacific Garbage Patch, a trash vortex circulating in the central North Pacific Ocean, microplastics only make up 8 percent of the patch.

Fishing nets make up 46 percent of the patch, along with other abandoned fishing gear making up a majority of the rest of the patch. Ghostnets, a term created to describe fishing nets that have been purposely or accidentally discarded, are drifting throughout the ocean and this causing an estimated 100,000 marine animals to become strangled, suffocated or injured.

People should continue their push to use less plastic in their daily lives, but companies should be held accountable for their overuse and improper disposal of plastics. The movement must continue, but it must move past straws, “gateway plastic” and onto larger and more serious plastic pollution issues.

Of the eight million tons of plastic that flows into the oceans every year, plastic straws only make up 0.025 percent of that. The focus on individual products should be moved onto bigger issues, like proper disposal techniques of plastic by manufacturing companies.

This article is the first in a four part series on the environment.