The neverending paradox of hipster-ism 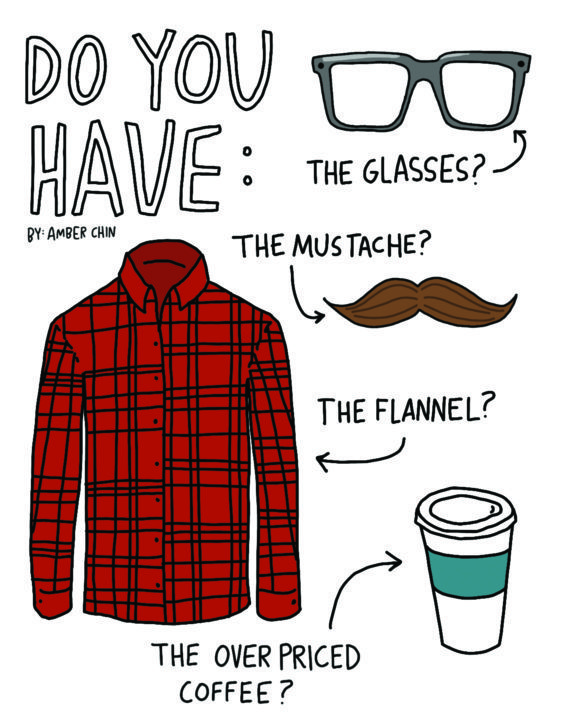 A look into how society is unknowingly becoming mainstream.

Webster defines a hipster as “a person who is unusually aware of and interested in new and unconventional patterns (such as jazz or fashion).” Though it’s a little dated, you get the point.

This wave brought the surge of vintage wear and veganism, mom-and-pop coffee shops that serve soy-milk chai lattes with latte art that cost $3 extra and a movement towards listening only to non-mainstream indie artists.

The original hipster was a product of the rebellion against capitalism, pop culture, social norms and “sameness” throughout society. These were the people who didn’t have hundreds of dollars to spend on clothes and shoes. Early “hipsterism” was a subculture of misplaced members of society who stood for feminism, LGBTQ rights and movements of a similar nature. It was an acceptance of alt-art and grass-root efforts.

Now, present-day hipsterism has become so massive it has to be identified as a culture of its own, with its journey ultimately leading it to the center of pop culture with popular figures like Tyler the Creator, Jared Leto and Lana Del Rey serving as blueprints.

Hipsters of today eat vegan diets, spend hundreds of dollars on replicated “vintage” clothing and spend their nights searching for the newest dive bars. They listen only to house music and go to music festivals to take polaroid pictures with glitter in their hair and jewels glued to their face.

If you’re subconsciously staring back at yourself as you read this description, you my friend are a modern-day hipster. Don’t be sad though, many of us are.

Hipster culture is now just as mainstream as the culture it once rebelled against. Popular clothing lines are transitioning to sell merchandise to fit the hipster style palette, and thrift stores now charge just as just as much as the former. Hipster culture has even trickled down to architecture and restaurants, featuring exposed-brick, minimalist aesthetics that cost thousands of dollars in rental fees and menus packed with infused teas and high-priced avocado toast. Prices have increased so much so that the OG hipster can’t even afford to be a hipster anymore!

Everyone seems to be indulging in it. The hipster movement has become so enthralled in its thirst for all things different that it has failed to recognize its regurgitation of ‘70s, ‘80s and ‘90s cultural artifacts.

Now, to be different is to be the same, but who’s to say this is a bad thing? If society, particularly millennials and generations following have found common ground, then what is so bad about that?  Well, a society where everyone is subconsciously conforming to the same ideology inevitably means that the rebellion was pointless. The original hipster movement was a nonconformist revolution against capitalism, pop music and the well-to-do upper-classisms to say the least.

If this rebellion is, in the end, swallowed up by capitalism, pop music and the well-to-do upper-class then isn’t it just counterproductive? Isn’t this just enabling capitalism and pop culture even more?

In opposition, not all hipsters are to be criticized. Modern day hipsters are at the center of equal rights movements, diversity and inclusion efforts and cruelty-free campaigns. It’s the manufactured hipsters that are the problem. Hipster culture–or any culture for that matter–is tarnished once it is brought to the production line. Modern-day hipsterism has been overtaken, stripped of its original identity and mass produced for all of society, inevitably becoming just another product of capitalism.

Society has recreated the original hipster movement, but this time, with no depth. It’s like a movie sequel without the original plot and none of the original actors. But, the question is, where does this movement ultimately lead its followers?