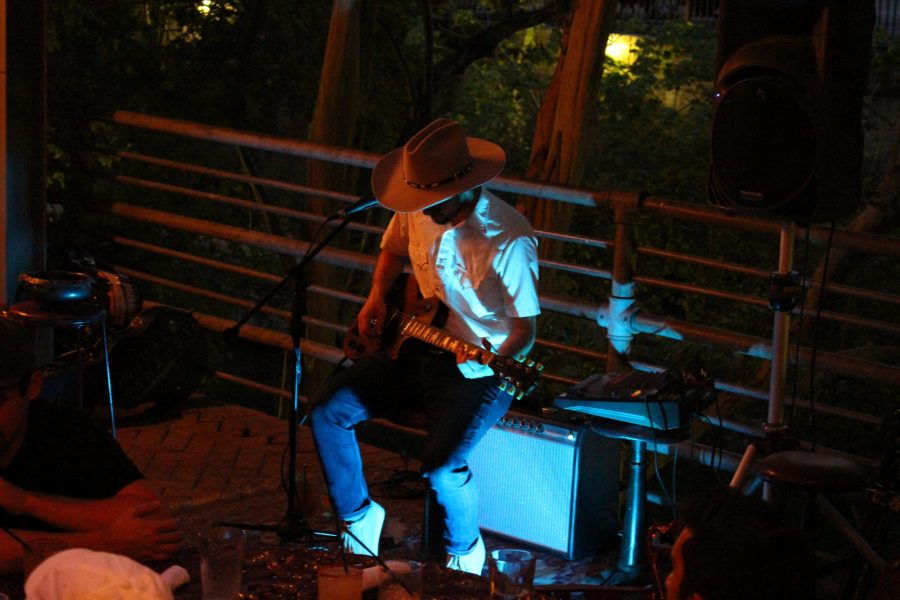 Garrett T. Capps takes the stage in his signature white cowboy hat on the riverwalk at Ocho. Kirkland Luther/The Paisano

The sun sets on the river outside of Ocho as people find their places among the chipped turquoise patio furniture. At the end of the alley, and on a designated space made of blankets, sit three stools.

Two of the stools have microphones placed in front of them, while the third hosts a tip-bowl and a single record on a smaller blanket. On the cover is a portrait of a man in his early 30s, shadowed by his large, white cowboy hat, gazing longingly into the unknown.

Soon, the familiar white hat takes its place on one of the stools, and, after finishing a drink of Topo Chico, the figure picks up a red electric guitar. Garrett T. Capps has taken the stage.

After introductions, he fills the audience in on their night ahead. He plays some solo electric tunes and acoustic renditions with friend and fellow musician, Kim Mackenzie, on the fiddle. “Bottoms up,” he toasts with his native Texan twang. The self-proclaimed “flight director,” Capps, navigates the patrons and passengers of Ocho for two hours through his Tex-Mex soundscape known as “NASA country” before sitting to talk about his latest full length LP, “May’s In the Shadows (Again),” and the alternative country scene.

Capps is a San Antonio native, as his hometown salute, “Born in San Antone,” from his debut 2016 release “Y Los Lonely Hipsters,” would suggest.

While attending Texas State University, the Reagan High School alumnus first started writing the songs that would later appear on the debut. Recording a 9-track album was not Capps’ priority going in. “We didn’t really know what was going on. We were just playing [the songs] and then we recorded an album. That’s it,” said Capps.

The album pays tribute to Capps’ influences, including Bob Dylan and Townes Van Zandt, while simultaneously mixing elements of punk rock (“Road for Days,” “Don’t Come Around Here”) and hard rock such as a cover of Thin Lizzy’s “Running Back.”

Capps desired to make his next songs more cerebral; he wants tunes that folks could still sing along to with his next release. With In The Shadows (Again), he accomplished that. Capps decided to form a new group alongside fellow musician Justin Boyd. Boyd filters Capps’ guitar and lap steel through numerous pedals that add a sonorous and ambient quality. Despite Capps having zero intention for modular synth manipulation when initially writing these tracks and feeling skeptical at times, Capps admitted, “sometimes it works.”

Rest assured, it works. Later album tracks such as “the Horizon” and “Can You Harness the Light” isolate listeners into an auditory space desert, and “Dancin’ Hands” feels like floating inside a Waffle House at 3 a.m.

If you are looking to stay a little more grounded, tracks such as “Go Home” and the album’s namesake, “In the Shadow’s (Again)” have traditional country sounds as familiar as your favorite whiskey. Put on “Here Right Now” the next time you’re on a road trip, and you will transport yourself into your very own A24 movie.

Capps is no stranger to the San Antonio music scene. With experience working as a stage manager, Capps booked bands for the Paper Tiger while it was transitioning hands from The White Rabbit. The Paper Tiger found an asset in Capps’ ability to bring more musicians to the city, which might have otherwise been overlooked.

Booking and playing has created many new connections for Capps; Capps and his bands frequent the White Horse in Austin, Texas, known as the sole alternative country space in the greater surrounding area. Frustrated with the density and saturation of alt-country in Austin, Capps knew there needed to be a place here in San Antonio for “these cool artists that have played, like, 502 [Bar] when they should be playing a honky tonk.”

Capps and Danny Delgado, owner of bars Hi-Tones, Faust and Lowcountry, will open the Lonesome Rose, previously home to the Phantom Room, in Oct.

Capps already had a buzz about his booking skills, so when asked how he teamed up with the Delgado brothers, Capps said, “I already knew them and somehow it just happened. Like, I don’t have any idea how to run a bar or anything, but I can run a venue.”

The psychedelic singer is still picking up the tempo before doors open in Oct. Capps is kicking-off a two-week, mid-western tour at The Cove Sept. 13 with Mayeux & Broussard before embarking on his first European shows; those shows include Holland’s Ramblin’ Roots, featuring Alejandro Escovedo and Rayland Baxter, and TakeRoot festival, featuring Father John Misty, Neko Case and Kurt Vile. When he returns back to the states, Capps is set to record his first upcoming solo album.

Go see Garrett T. Capps at any of his numerous upcoming dates. You do not want to miss being a part of the journey through NASA country because, man, it sure is beautiful out there.