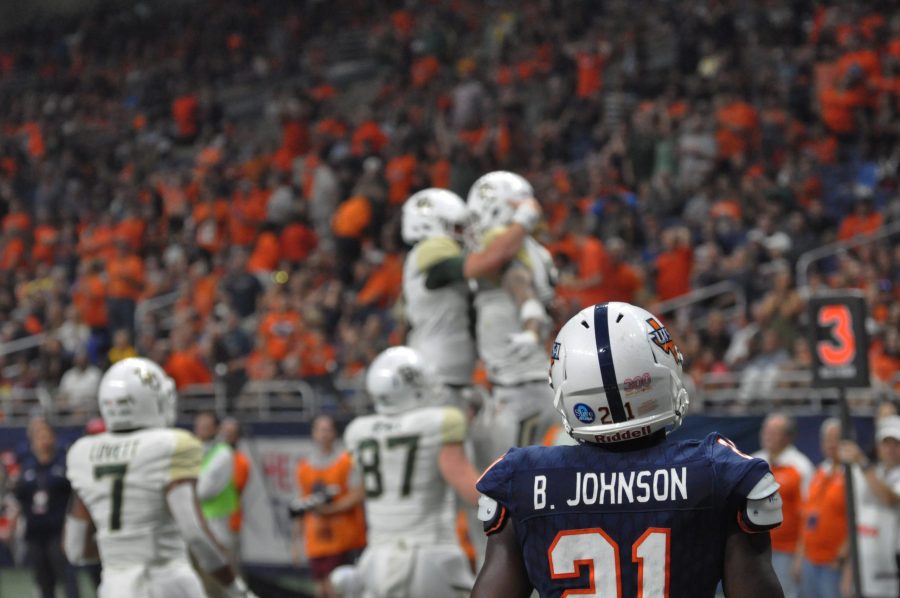 Baylor hands UTSA their first home loss
UTSA and Baylor’s first meeting last year ended with a historic victory for the ‘Runners when they downed the Bears 17-10. Heading into their home opener, UTSA looked to recover after surrendering 49 points in a staggering defeat against the Arizona State Sun Devils last week. The key to winning the game was the passing game and secondary.

The Bears won the coin toss, and the Roadrunner offense took the field looking to find a rhythm. After a timeout to start the game, the Baylor defense forced a three and out after two failed runs and a short two-yard pass to WR Kirk Johnson Jr. from QB Cordale Grundy.

UTSA’s defense struggled initially, quickly surrendering 10 unanswered points at the hands of the Baylor offense. The first came off of a 51-yard drive lead by Baylor QB Charlie Brewer, who started his first drive off with an explosive 22-yard reception to WR Jalen Hurd. The drive was concluded with a three-yard touchdown pass to RB JaMycal Hasty. Following an interception thrown by Grundy on the next drive, the Bears capitalized and converted a 47-yard field goal by kicker Connor Martin.

The ‘Runners finally got on board for their third offensive drive. Despite RB B.J. Daniels converting a crucial third down with a 36-yard run, UTSA could not find the endzone. UTSA kicker Jared Sackett nailed a 47-yard field goal to get the first points of the game for the ‘Runners. The first quarter ended with a score of 10-3, Baylor. Both teams had picked up similar offensive yardage with 71 for Baylor and 72 for UTSA.

UTSA struck first in the second quarter following a Baylor three and out. A 27-yard run by RB Jalen Rhodes setup Sackett for a successful 46-yard field goal. Following the field goal, Baylor began a long drive starting at their own two-yard line. Within two plays, the Bears were at the 32-yard line and pushing down the field. The drive ended with a 22-yard touchdown reception from Brewer to WR Denzel Mims. Baylor recovered their own onside kick and started the drive at their own 49-yard line with 4:01 left in the quarter. The drive began with a trick play that saw Brewer catch a 36-yard pass from WR Jared Atkinson to leave them at the UTSA 15-yard line. The UTSA defense held the Bears to a field goal after CB Teddrick McGhee made a third down stop. The UTSA offense ended the half with a touchdown off the legs of Daniels following a Baylor fumble.

At halftime, the score stood 20-13, Baylor. While the score was close, Baylor lead with 234 offensive yards compared to UTSA’s 155. A huge part of this was due to Baylor’s front seven absolutely decimating the UTSA offensive line. In addition, Baylor’s offense was averaging 17-yards per reception, the Roadrunner secondary would have to come out and stop the strong pass attack to have any hope of staying in the game. However, the ‘Runners run defense was extremely impressive as they held Baylor to 43 rushing yards.

To start the third quarter, both teams punted on their initial drives. With 7:35 left in the third quarter, Baylor began a tedious four minute drive that ended with a seven-yard touchdown reception by Hurd from Brewer. UTSA was able to respond early in the fourth quarter after a drive propelled by big plays. Grundy hit WR’s Greg Campbell Jr. and Tariq Woolen for key conversions that kept the drive alive. WR Blaze Moorhead made an exciting catch in the corner of the endzone to keep UTSA in the game.

Despite their best efforts, the ‘Runners could not get on the board again and surrendered two more scores to the Bears. A 38-yard field goal by Martin and a one-yard touchdown run by Hasty finished off the fourth quarter. Final score: 37-20, Baylor.

Although disappointed by the loss, UTSA’s head coach, Frank Wilson, was positive about the team’s improvement from last week.
“I thought our team took a step in the right direction, and at the end of the day, here is what I said to our team: When we’re good enough, we’ll be good enough, and right now, we’re not good enough to have earned a victory, but we are better today than we were last Saturday” – Wilson said.
Wilson also praised Grundy, who made his second start at the D1 level. “I thought he showed poise and leadership for our football team,” Wilson said.

UTSA (0-2) will travel to Kansas this Saturday to face Kansas State University (1-1). Their next home game will be on Sept. 22 against Texas State University at 6 p.m. in the HEB I-35 Rivalry game. Come out and support the ‘Runners!