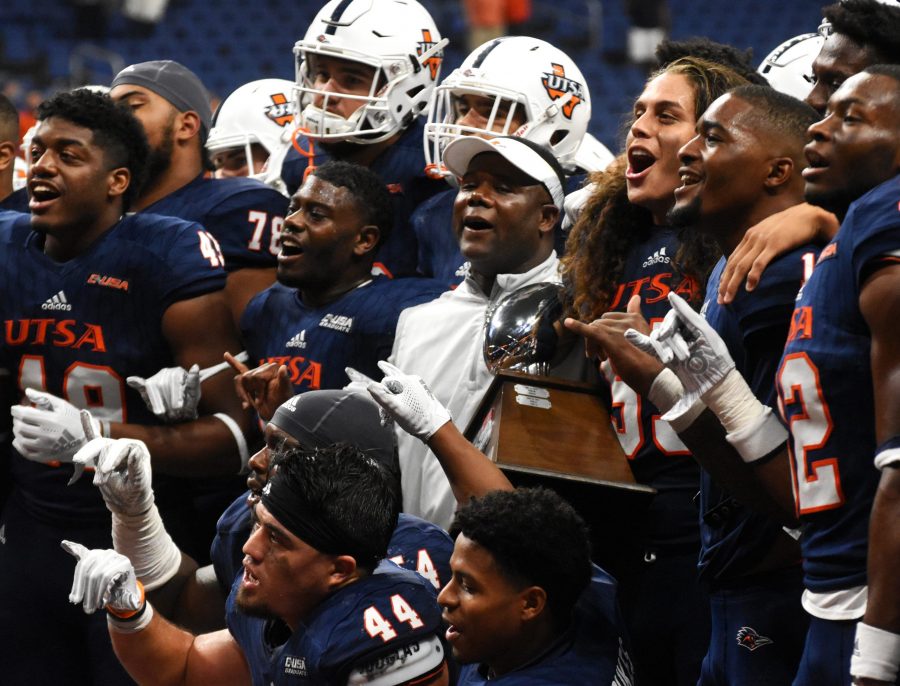 UTSA earns their first win of the season

The UTSA (1-3)-Texas State (1-3) football rivalry presented itself in week four, where an intensely anticipated game at the Alamodome was packed with 29,205 attendees on Sept. 22. This placed the first win under the ‘Runners belt before entering the conference play next week against The University of Texas at El Paso.

“The whole week we’ve been preaching you just gotta get the one,” linebacker, Josiah Tauaefa, said. “We come off the three losses, whether they’re against Power Five opponents or not, they still hurt. They still sting.”

The ‘Runners won the coin toss, electing to defer. After many attempts by Texas State to move the ball, Tauaefa sacked Bobcat quarterback (QB) Willie Jones III for a loss of 11 yards, followed by a fumble recovery by UTSA defensive end, Lorenzo Dantzler, for a 27-yard touchdown, less than one minute into the game.

“Call came in from the sideline. It was third down. I knew we needed a big play on the first series. So I came around the edge and Joe got to the quarterback first. And I saw the ball and I just scooped it and took it the other way,” Dantzler said.

After many small gains to bring the ball from the UTSA 42-yard line to the Bobcat 48-yard line, running back, Jalen Rhodes, rushed left for 12 yards to the Texas State 37-yard line. Carefully inching their way closer to the end zone, ‘Runners wide receiver, Tykee Ogle-Kellogg, ran the ball in for a seven-yard touchdown, putting the ‘Runners up 14-0.

The Bobcats maintained possession of the ball for three plays and gained one yard. Shortly after, UTSA turned the ball over after seven yards for the Bobcats to attempt a touchdown. Bobcat QB Tyler Vitt then snuck in for a one-yard and scored the first touchdown for the Bobcats.

Kicking off the second quarter, Texas State regained posession of the ball for two plays before UTSA linebacker, Les Maruo, intercepted Vitt’s pass. Bobcat kicker Clayton Stewart missed this field goal, turning the ball back over into UTSA hands. As Texas State attempted to gain yardage and safety for the ‘Runners, Andrew Martel rushed Vitt for a four-yard draw.

Pushing into the fourth quarter, Sackett launched a field goal from the Texas State 23-yard line, furthering the ‘Runners lead 20-14. With many attempts to push the ball up the field, UTSA gained 27 yards before kicking another field goal, propelling the ‘Runners to 23-14. Feeling hurried, the Bobcats traveled 14 yards down the field before running in a 13-yard touchdown, bringing the score closer together at 23-21.

Running down the clock, Rhodes and Grundy rushed for a total of 20 yards before punting the ball back to the Bobcats. Vitt was then rushed two yards back in the end zone, scoring a safety for the ‘Runners. This finished out the game at 25-21, earning a first win under the ‘Runners belt going into conference play next week.

“Jason Rollins, our defensive staff, made a great call. And that safety was the turning point to seal the victory for our team,” Wilson said. “I thought our team played fast and physical. The vindication of hard work coming to fruition is a beautiful thing. There is nothing more gratifying to see out of your student athletes. So happy for them.”

On Sept. 29, the ‘Runners will face-off against UTEP for their first conference game at the Alamodome, hosting UTSA’s Family Weekend at 6 p.m.