Athlete of the Week: Les Maruo 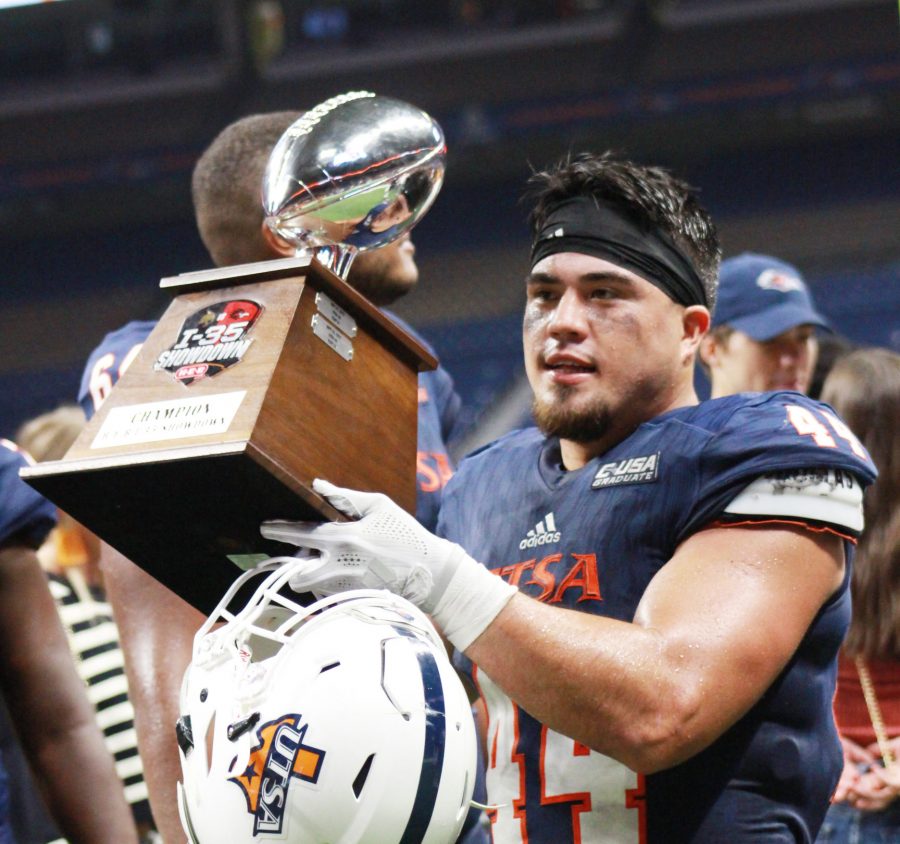 Since he transferred from Hutchinson Junior College in Kansas, outside linebacker Les Maruo has been a key member for the UTSA defense. In their recent win over Texas State University, Maruo tallied four solo tackles and came up with a diving interception that sent the crowd into a frenzy. Maruo has 18 tackles so far in this season, which ranks third on the team behind Josiah Tauaefa and Darryl Godfrey. Maruo is a key component to UTSA’s defensive success, and he seems to be improving more as the season continues.

Despite being the stocky built football player that he is now, Maruo was initially a baseball player. He traveled around the state of Kansas playing baseball before his football days. “In high school I started getting bigger and faster,” Maruo said. “Football fit my body type more, and so when it came time for college, I chose football over baseball.”

Maruo attended Goddard High School in Kansas, which is where he spent his middle school and high school years. Coming out of high school, Maruo did not have any division I scholarship offers, so he attended Hutchinson Junior College near Wichita, Kansas. “I took the junior college route and that’s where I feel like I really developed as a player,” Maruo said. “I don’t come from a wealthy family, and I could’ve gone to college for baseball, football or wrestling, but football was the easiest to get a scholarship in, so I went that route.”

Before moving to Kansas, Maruo lived in his birthplace of Japan. Maruo lived in Japan until he was 10-years-old, and although you could not know it by speaking to him, English is actually his second language. “I can’t really write in Kanji anymore, but I am bilingual,” Maruo said. “Japanese is my first language.”

Maruo recently graduated with a degree in kinesiology with a concentration in athletic medicine and is currently enrolled in a master’s program. “I did my 300-hour internship last summer while doing football, so it was kind of tough,” Maruo said. “Now I’m in a program that’s a master’s of science and business. It’s for science majors that want to switch to business. It’s only a one-year program, so I thought it was good.”

As a kinesiology and athletic medicine major, it makes sense that Maruo loves sports other than football. His other favorite sport is baseball, but he takes an interest in all sports “I really like any sport,” Maruo said. “I can watch UFC or wrestling all day because I like that violence, but I can still watch anything. I can even watch golf,” Maruo said with a grin.

With Maruo enrolled in a master’s program as well as football, he rarely has time to himself. But when he does, he enjoys being outside. “I love going out to a lake or something,” Maruo said. “In Kansas, I used to wakeboard and jet-ski with my friends, and I like just sitting outside by a pool or something too.”

Every gameday, Maruo has the same meal. “I get one piece of chicken and some pasta with tomato sauce, and then some peas over rice.” Aside from that, Mauro likes to listen to some rap music before games to get him hyped up. “Before a game I like to listen to some hardcore hip-hop, but when I’m by myself, I like gospel music and reggae and just chill-vibe music,” Maruo said.

Considering some of the struggles he’s been through, it’s quite remarkable to see Maruo where he is today. After many hardships, football became his ticket to success and a better life. “Football means a lot to me,” Maruo said. “My dad passed away when I was four years old, and after that my mom got depressed and didn’t work, so we grew up extremely poor. I didn’t have a lot.”

Had Maruo never signed up to play middle school football without his mom’s permission, things could have been drastically different for him. “I never wanted my mom to stress over money because we didn’t have money,” Maruo said. “But now, I’ve graduated debt free, I have a degree and I’m in a master’s program. Football just changed my life and impacted me in every way. It’s crazy how God works.”

Les Maruo, and the rest of the UTSA defense, will look to lead the Roadrunners to their second win of the season when they take on the UTEP Miners on Saturday, Sept. 29. Be sure to come out to the Alamodome, and keep an eye out for number 44.