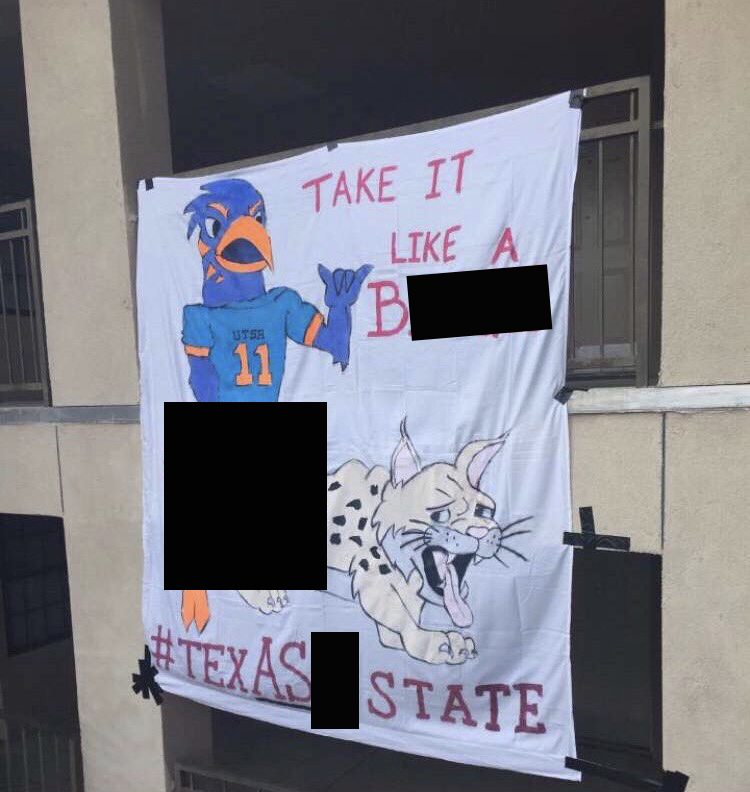 “I fully and resolutely condemn this action on the part of the students involved in the creation and display of these banners,” stated Eighmy in the email. “It stands against every principle in which UTSA believes: integrity, excellence, inclusiveness and respect.”

Leading up to the highly anticipated football game against Texas State University, UTSA fans used Twitter to post memes and photos, firing up the rivalry under the hashtag #TXSTHATEWEEK. Banners were reportedly hung on and off-campus, including at Chaparral and Laurel Village.

The images and sentiments depicted in these banners displayed UTSA’s athletic rivalry with Texas State in the context of interpersonal violence, sexual assault, sexually transmitted diseases (STDs) and promiscuity of women.

“We cannot, as an institution, tolerate the perpetuation of a campus culture where these very serious issues are used lightly or in jest,” stated Eighmy, regarding the images and sentiments displayed on the banners.

One banner in particular depicted sexual assault between the two school mascots, along with a profane message.

In an email interview with Eighmy, he explained how students can exercise their school spirit while maintaining a healthy rivalry with other universities.

“Rivalries allow us to build a community around the things that unite us and should make us proud to be Roadrunner,” Eighmy said. “The events from the other day are not us, we are better than that. I would like to make a teachable moment and have those were involved learn from it and move forward.”

Some students believe #TXSTHATEWEEK was originally meant to keep the rivalry between the two universities fun, until others took it too far.

Nathan Flores, a junior music education major, believes the banners were supposed to be fun and get everyone excited for the football game.

“Students should be allowed to show their school spirit but not in a very vulgar way,” Flores said.

Romy Orta, a senior political science major, agreed with Flores’ statement and believed the objective of the banners was to keep the rivalry fun.

“It’s all fun, the rivalry,” Orta said. “Of course, people take it too far and it gets disrespectful.”

Other students like Kayylen Fernandez, a senior chemistry major, did not find the banners to be funny and thought they were inappropriate.

“I personally did not think they were funny especially that one banner [depicting the two mascots engaged in a sexual act],” Fernandez said. “It was kind of childish for us to create something like that. The picture depicted on the banner is super sensitive especially during our time period.”
Rivalry gone wrong
Orta suggested, to avoid this situation again in the future, the university should hold a contest for banners and set specific guidelines and criteria. Fernandez also agrees with Orta and believes the content of the banners should be kept appropriate.

In order to avoid situations like this from occurring again, Eighmy believes the UTSA community should take its core value, respect and create an environment that respects everyone.

“Respect is one of UTSA’s core values,” Eighmy said. “We all have a responsibility to ensure that we foster a culture of respect and that everyone is valued for who they are. It takes the entire UTSA community to create that environment and to live by that standard every day.”

Eighmy stated in the email that the students involved in this situation would face disciplinary actions, but due to Family Educational Rights and Privacy Act (FERPA) regulations, specifics could not be revealed.

Eighmy then listed services such as Counseling Services and Office of Student Advocacy, Violence Prevention and Empowerment, for students that may have been affected by the banners, and who may have experienced sexual assault or other threats to personal safety.

The Paisano has tried multiple times to get in contact with the Office of Student Advocacy, Violence Prevention and Empowerment for an interview regarding this situation.

At the end of the email, Eighmy apologized to President Denise Trauth and the entire Texas State community.