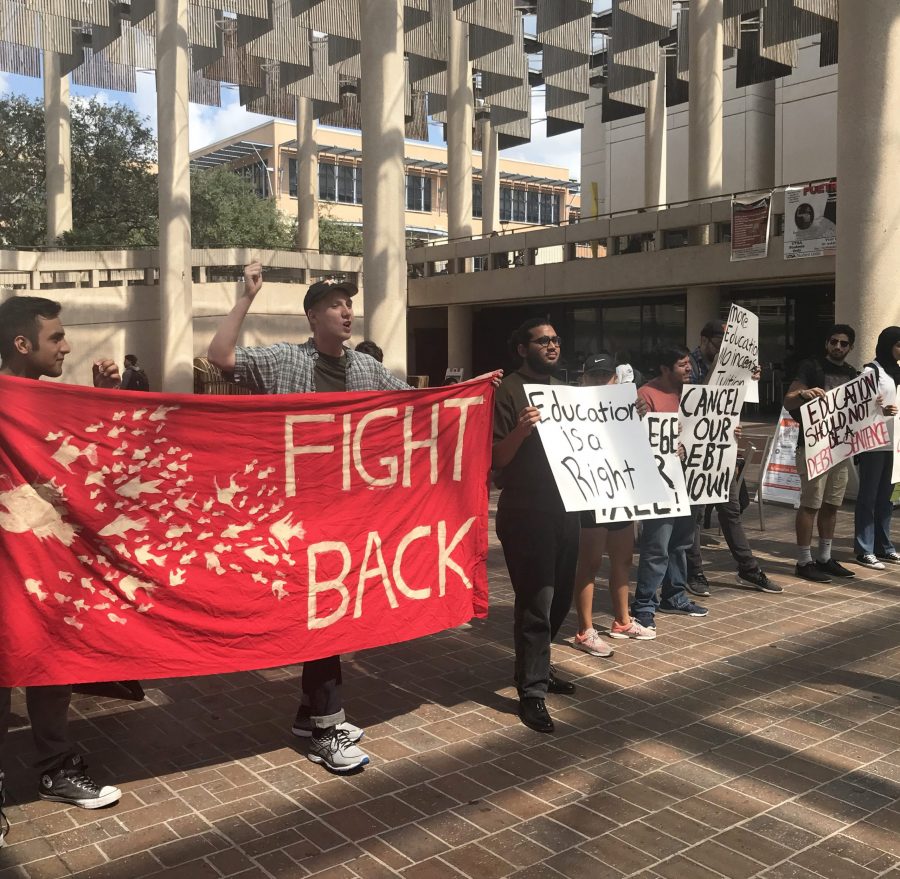 Young Democratic Socialists of America protest at the Sombrilla

On Sept. 26 at 11:50 a.m., UTSA’s chapter of the Young Democratic Socialists of America (YDSA) held an organized student walk-out protest to address the rising cost of tuition and debt Americans familiarly face after earning a college education.

In a statement release, YDSA described the intent of the public demonstration held under the Sombrilla last week:

“The demonstration will be to address the rising costs of student tuition, the staggering amount of student debt held by students at UTSA and around the country, to advocate for debt cancellation and universal college for all.”

UTSA YDSA, the youth and student section of the Democratic Socialists of America, is a national organization of recognized campus chapters and activists. UTSA YDSA consists of students organizing across universities, colleges and high schools to fight for the immediate needs of workers and students, while building the capacity to fight for more radical and structural changes.

Students lined up under the Sombrilla with signs that read “Student debt: $15 Trillion” and “Cancel our debt now!”

“We are beginning our demands at the school level, calling for freeze all tuition and to start negotiating more accessible ways to make our school more affordable. The Business College and Engineering Students have been hit hard this year with tuition increases. We have a new engineering building being built, which seems unjust,” said Cuauhtemoc Terena, YDSA member and senior marketing major.

“In the meantime, they raised our tuition. Where’s our money going? Our education is poor, we pay for homework access. We deserve better than this. Look at other countries, they have accessible college, they have stipends to make it easier. Meanwhile, we have homeless students living in the JPL, in their cars, homeless students taking showers at the rec. All these things come from increased tuition being squeezed by our debt. For example, I have to take out a loan in my mom’s name, you have to put your parents through debt again just so you can get through college.”

YDSA members and students stood in the Sombrilla from 11:50 a.m. to 1:30 p.m. shouting, “Education is a human right, everyday and every night!”

During the protest, conflict briefly broke out between UTSA YDSA and Young Americans for Freedom (YAF). A member of YAF walked up to YDSA protestors at close range, and a YDSA member grabbed the backpack of the approaching YAF member.

“Texas is the worst place to be if you don’t want debt,” weighed in sophomore mechanical engineering major Liam Quesada. “We could easily pay for equal tuition, but we don’t, instead America makes people take out tons and tons of loans. I’m probably going to be in debt until who knows when.”