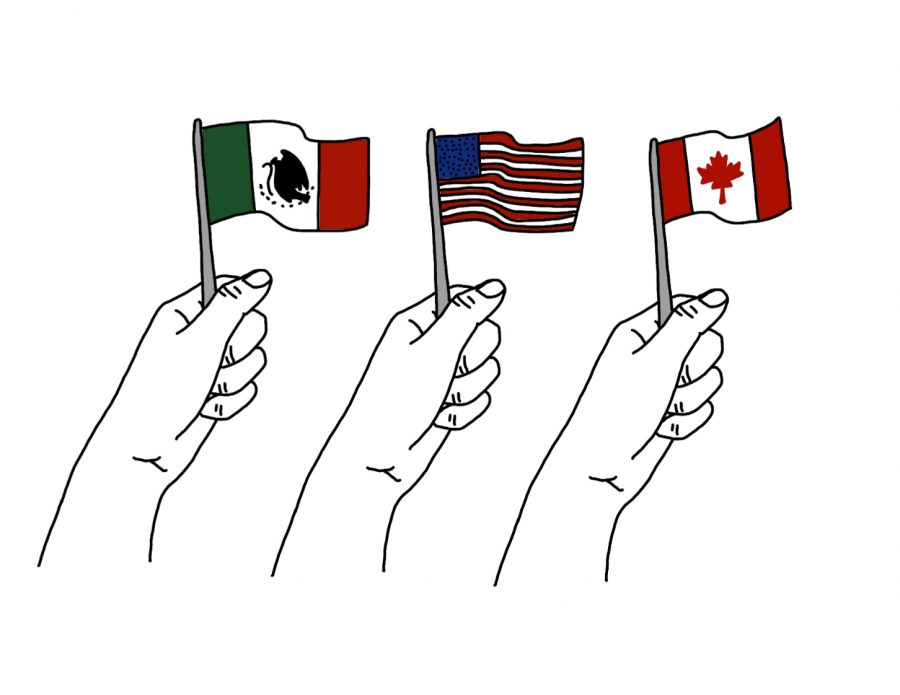 Flags of Mexico, the United States and Canada. Graphic by Amber Chin/The Paisano

As the North American Free Trade Agreement (NAFTA) currently stands, the United States is operating under a significant trade deficit with Canada and Mexico. After the Sept. 30 decision date, Trump decided to not withdraw from the NAFTA agreement. Specifically, Mexico and the U.S. have reached an agreement on terms of renegotiation, but Canada has yet to agree. The terms include: for automobile companies to produce more cars in North America, for Mexican employers to pay higher wages to workers involved in international business, to keep NAFTA free of agricultural tariffs and for each nation to enforce stricter environmentally beneficial standards.

In 1994, Canada, Mexico and the United States bound themselves to NAFTA, forming an alliance that encourages trade among them and discourages trade between outside countries. With this agreement, American, Canadian and Mexican businesses can sell many of their products without extra fees. Countries not involved in this agreement have to pay tariffs on products they sell in the United States, but within NAFTA, not all tariffs are removed. President Trump has cited a 300 percent increase on U.S. dairy products sold in Canada as a need for a renegotiation.

As to whether this agreement has helped the US or not is a difficult question to answer. To economist Dr. Hamid Beladi, associate dean of research and a professor of economics and Janey S. Briscoe endowed chair in business, a trade union like NAFTA is measured by the amount of trade creation and diversion. A union creates trade between the different members, but also diverts trade with those not in the union — this is called trade diversion.

“If you want to judge a union, you look at trade creation and trade diversion and see which one dominates. If trade creation dominates, then the union is good for the members,” Beladi said. Trade within NAFTA countries is over $1.14 trillion a year, and for that reason, economists largely agree that the union is beneficial.

President Trump has cited inequitable trade deficits and unstable job markets as the two most important factors in determining whether NAFTA is beneficial to the U.S. In 2017, the Office of the United States Trade Representative reported that Canada and Mexico had trade surpluses with the U.S. of $97.6 and $132.4 billion, respectively. In terms of equity, Canada and Mexico gain more from NAFTA than the U.S. Regarding job stability, both the U.S. and Mexico have felt negative effects, such as the 680,000 jobs that have moved from the U.S. to Mexico. Eighty percent of these jobs were in manufacturing, leaving a sector of the U.S. without employees.

In Mexico and Canada, agricultural sectors have lost stability due to the U.S. government subsidizing national farmers. The U.S. Department of Agriculture reported in 2012 that 39 percent of U.S. farms receive federal subsidies, allowing agricultural products from the U.S. to sell at a lower price point and outcompete other national markets.

President Trump cited NAFTA in his first presidential debate of 2016 as “the worst trade deal ever.” He is more concerned with the U.S. receiving an equitable profit, and not running a trade deficit, than any theoretical concepts such as trade creation and diversion.

As of Oct. 2, the U.S., Mexico and Canada have renegotiated the NAFTA Agreement, and the new deal is now called the United States-Mexico-Canada Agreement. It must be ratified by each country’s legislature and as a result, won’t go into effect before 2020.