Deep Roots: An intersection of Borders 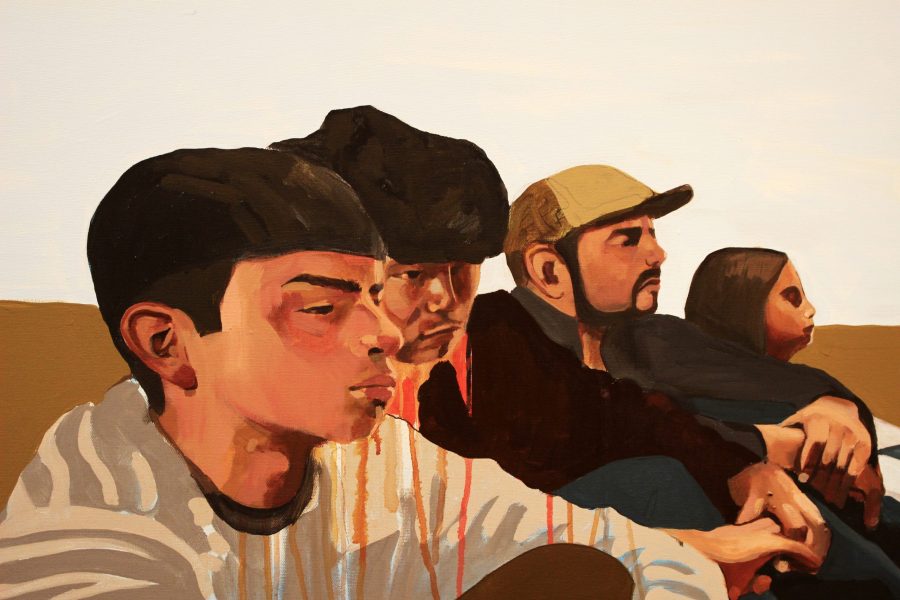 “We need to protect our borders” by Ruth Leonela Buentello.

The latest exhibition in the UTSA Main Arts Gallery is unapologetically human. Deep Roots: An Intersection of Borders is a candid and insightful look into the cultural groups affected by colonialism, racism and bigotry. Curated by Chris Davila and Liz Paris, the event displays deeply personal works by Ruth Buentello, Celeste De Luna, Rafael Fajardo, Joe Harjo and Kathy Vargas.

The exhibition is a collection of cathartic creations, in various mediums, portraying the too-often overlooked adversities that minorities face in the U.S. Each artist seeks to challenge the ignorant and hateful rhetoric that flows from the highest offices in our land. As we bask in the San Antonio tricentennial, we are reminded of the generations of oppression, gentrification and cultural genocide through the artwork in the exhibition. The artists remind us that our history, socioeconomic background and public perception not only comprise the cultural identity of groups of people, but also of the individual.

Each of the five artists bring out their personal angst within their works. Rafael Fajardo, an associate professor of electronic media and art & design at the University of Denver, uses his background as a developer to create an interactive digital environment. Fajardo’s futuristic and interactive piece, “Migration,” allows the viewer to engage with the subject matter that is displayed on a TV screen. For instance, hundreds of animated butterflies lift from their resting positions as viewers approach the monitor.

His work explores the conflicting discourse of “us” and “them,” invoked by the mainstream media that demonizes and mystifies immigrants and minorities. We are reminded of the history of colonization and development and how gentrification has played a role in the history of many minority groups.

Likewise, Kathy Vargas explores the idea of polarizing groups of people. In her hand-colored gelatin silver print series, “Masks,” she portrays a macabre series of masks that represent the various characters of the “us” and “them” rhetoric. Vargas explains, “There’s supposed to be some ‘unease’ between the masks, and yes, they do look scary to each other, just as ‘we’ sometimes look scary to ‘them’ and vice versa. By now, we should all be past that ‘us’ and ‘them’ separation, but we can’t seem to progress, can we?”

Vargas’ triptych “I Can’t Keep Track of Each Fallen Robin,” also a print series, is inspired by a Leonard Cohen track titled, “Chelsea Hotel #2.” Vargas explains that the song is fitting to the controversial detainment of over 500 children in U.S. Immigration and Customs Enforcement (ICE) detention centers as of August. Although a fallen robin seems like an insignificant event in nature, the robin is a metaphor for each of the detained children.

Vargas explained, “A small bird falls from its nest in the garden: a small tragedy. The larger tragedy: children separated from their parents as a punishment for entering the country illegally. What will happen to all these little ‘robins’ who were taken from their nests?”

The artists recognize how the past and present events of their cultures are ultimately incorporated into their cultural identities.

Joe Harjo, professor of photography and the studio manager at the Southwest School of Art, exemplifies this specific facet of cultural identity. His series, “Dead Indians,” is a multimedia exhibit that portrays the effects of colonialism on Native Americans throughout history. His exhibit has many Catholic references that paint the picture of Native Americans’ assimilation.

Harjo’s bold exhibit shows how the attack on a culture’s traditional values sends shockwaves into future generations who live with the effects of their ancestor’s oppressors.

“From my collection, I want the viewer to think more deeply about native existence,” Harjo said. “Though we have been stripped of [our] land, culture, spirituality and language, we are still here. We are thriving, we are surviving and we are a people of the future.”

The entire exhibition challenges “borders” between the social constructs of genders, classes and cultures by showing how an area like South Texas has become an intersectional hub of not just one overarching group or idea, but rather a society based on pluralism. Celeste De Luna, an acclaimed print maker from the Rio Grande Valley, explores this idea in her piece, “Prevention Through Deterrence Landscape.” Her evocative composition rejects the idea of anti-diversity and portrays the complex relationships of the borderland people. Her work also protests that a multi-cultural society is not something to fear but something to embrace with pride.

Similarly, Ruth Leonela Buentello, commended San Antonio artist, Ruth Leonela Buentello paints a vivid and emotional series of visceral narratives of the Latinx strife to citizenship. Buentello uses some of her own family members as subjects in her paintings in order to help her viewers empathize with the migrants who leave their country in exodus, only to be detained by border officials and then demonized by American media.

Buentello’s triptych, “Juanita Arrested for Selling Flowers” (Youtube Stills 1, 2 and 3) shows the unnecessary police assault of Juanita Mendez-Medrano. Beuntello’s series eloquently shows the injustice and the innocence of the event. Her exhibit shows the dehumanization of the Latinx community before and after amnesty in the U.S.

Co-curator Chris Davilla commented, “My hope is that the public is exposed to some different points of view that perhaps they have not been aware of previously. Each of the artists in this show have shared a part of themselves, and I hope that the viewer will see that emotion in the work and feel it as well.”

The exhibition leaves viewers with the idea that shared experiences, past and present, direct and indirect, make up the cultural “roots” of groups of people and the individuals who comprise them. The artists seem to have created self-portraits that open an honest and candid window into their own identities. “I hope that people feel this exhibition whether they feel sad about the injustice in Ruth Buentello’s moving paintings, feel the lightness of the butterflies migrating in Rafael Fajardo’s video game or the quiet intimacy of Joe Harjo’s arresting installation. Because it’s those feelings that can help inform thoughts and change minds,” Davilla said.

The exhibition is free and open to the public Tuesday through Thursday from 10 a.m. to 4 p.m. The last day of the exhibition is Oct. 5. For more information about the event, go to art.utsa.edu/deep-roots.