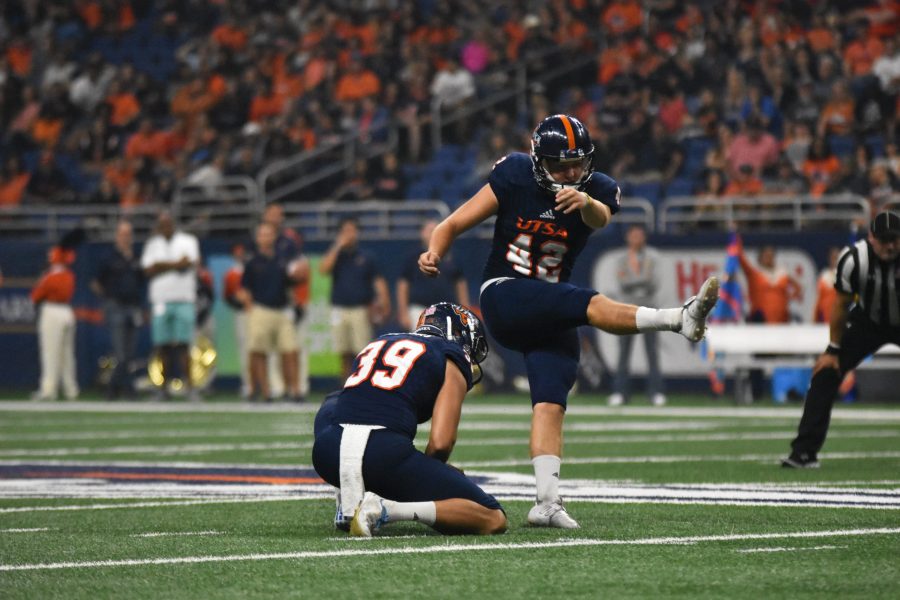 Gaining their first win for in-conference play, the UTSA Roadrunners (2-3) defended the Dome and conquered the UTEP Miners (0-5) 30-21 on Saturday, Sept. 29. This game showcased the ‘Runners intensity and drive that should be seen throughout the rest of in-conference play.
“It’s our first conference [win] of the year, and to be able to grab it sets us in position to be able to complement it again next week,” said head coach Frank Wilson.
Jumping into the first quarter, UTSA won the toss and UTEP began with the ball on the UTSA 35-yard line. Unable to push the ball for a second first down, UTEP punted the ball to the UTSA 47-yard line. With the ball in UTSA hands, wide receiver Greg Campbell Jr. drove the ball for a first down on the UTSA 49-yard line. After many attempts to move the ball, the ‘Runners opted to punt the ball to the UTEP 8-yard line.
With the ball on the UTEP 19-yard line, defensive end DeQuarius Henry sacked UTEP quarterback, Kai Locksley; Locksley then recovered his own fumble at the UTEP 16-yard line. Immediately after, UTEP linebacker Sione Tupou recovered a fumble from Campbell at the UTSA 43-yard line. Inching closer to the end zone, UTEP scored the first touchdown of the game with 4 minutes and 18 seconds left on the clock.
With the ball in UTSA hands, UTSA quarterback, Cordale Grundy, completed multiple handoffs to running back Jalen Rhodes and passed to Campbell, inching their way closer to the end zone. Seven yards away from the end zone, Grundy rushed right and ran the ball to tie the game 7-7 at the end of the quarter.
Kicking off the second quarter, UTSA came out with determination and strong safety Brenndan Johnson sacked UTEP Locksley for a loss of six yards. After multiple drives down the field by Rhodes, Grundy and Campbell, the ‘Runners scored another touchdown, pushing UTSA further ahead. With the ball in UTEP hands, Johnson intercepted the ball for UTSA on the UTEP 20-yard line. Grundy then threw a deep pass to wide-receiver Tykee Ogle-Kellogg in the end zone for another Roadrunner touchdown.

“Tykee ran a great route and he was wide open, he set the defender up and I was able outside of him. So we had a good connection in the red zone. I think he played well tonight,” Grundy said.
As the quarter came to a close, Grundy threw multiple passes to Campbell and tight-end Gavin Sharp in an attempt to gain yards down the field. Grundy was sacked by linebacker A.J. Hotchkins for a loss of five yards. In the final seconds of the half, Grundy threw a sideline pass to Sharp for another touchdown, ending the half with the ‘Runners up 24-7.
“[When they] muff the punt and we fall on top of it, we come away with it, that just sparks something within the team, and the offense was able to get points on the board,” said linebacker Josiah Tauaefa.
After the half, the ‘Runners received the ball on the UTSA 28-yard line. The ‘Runners drove the ball down the field for 46 passing yards completed to running back Halen Steward and Campbell, as well as rushing yards from Grundy and Rhodes. UTEP then regained possession, and scored a touchdown seven plays later by a 6-yard pass from Locksley to wide-receiver David Lucero in the end zone. Winding down the clock, UTEP inched their way down the field in an attempt to end the quarter in possession of the ball. The quarter ended with the ‘Runners still in the lead 24-14.
Following the third quarter, UTEP rushed over left guard Eric Banks for a 3-yard touchdown, catching up to the ‘Runners. Regaining possession of the ball, Grundy threw a slant pass to wide receiver Kirk Johnson Jr. for a 12-yard gain. Now on the UTEP 16-yard line, UTEP defensive end Mike Sota sacked Grundy for a six-yard loss. On UTSA’s fourth down, Jared Sackett launched in a 39-yard field goal. As the clock began to run down, and with the ball in UTEP hands, Tauaefa and linebacker Les Maruo began rushing Locksley until the ball was turned over to UTSA. In the final 35 seconds, Sackett kicked in a 47-yard field goal, sending the crowd to their toes and sealing a second win for the ‘Runners, and their first win for in-conference play.
“I think it was big for us at home for the second week in a row to find a way to muster a win, and we did enough,” Wilson said.
Catch the Roadrunners live on ESPN3 this weekend at Rice University on Saturday, Oct. 6, at 6 p.m.