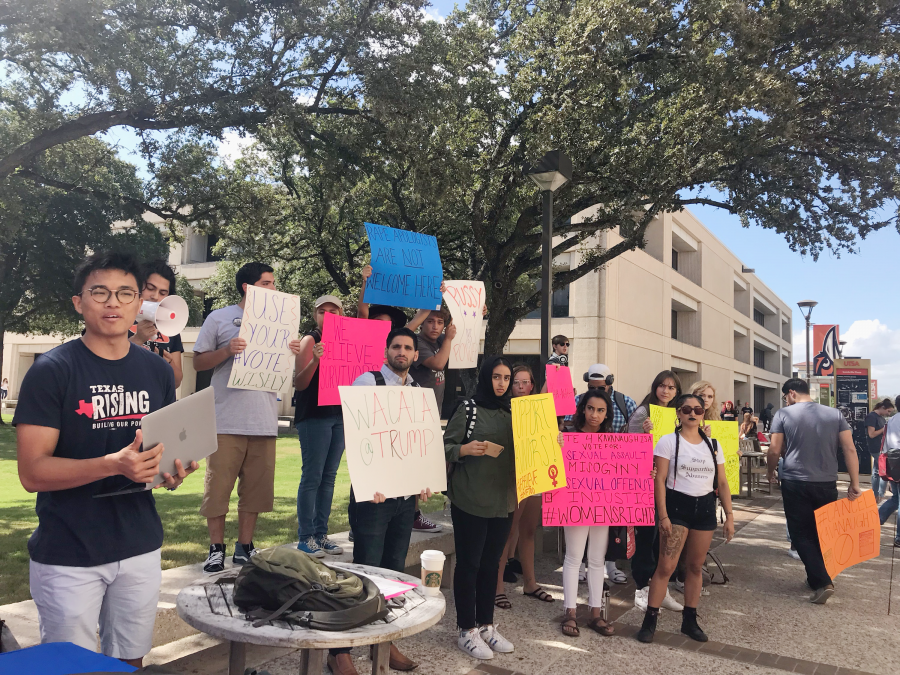 ‘No Trump, no KKK, no fascist USA’

Texas Rising, a political group in San Antonio, held a counter protest on Oct. 5 in response to the Young Americans for Freedom (YAF) protest the day before. Both protests address then current Supreme Court Justice Nominee Brett Kavanaugh and the recent sexual assault allegations made against him by Dr. Christine Blasey Ford.

YAF’s protest on Oct. 4 was held in support of Kavanaugh’s denial of the accusations and in support of his securing a seat on the Supreme Court, despite Ford’s allegations. The YAF protest caused students with opposing views to speak out during the protest, which resulted in a verbal arguments between opposing parties.

Gerald Lewis, UTSA associate vice president for public safety and chief of police, stated “The UTSA Police Department is investigating several incidents that occurred during the student protest on Oct. 4. In the first instance, a student reported that she was slapped by another student.

“Based on a review of video, social media posts and interviews with students, the preliminary investigation has determined there was inadvertent and unintentional contact that does not fit the elements of an assault.

“In a separate matter, in which a student’s hat was taken and his protest sign torn, the university police department has consulted with the Bexar County District Attorney’s Office and the hat incident has been classified as a Class C Misdemeanor of Assault by Contact. Destruction of the sign has been determined to be a Class C Misdemeanor of Criminal Mischief. The investigation is continuing.”

Students who opposed YAF’s protest held a poster-making party the night before the Texas Rising protest on Oct. 5. That morning, Texas Rising members and other student protestors lined up in front of the McKinney Humanities Building holding signs that read “I believe her” and “#BelieveSurvivors.”

“Today we’re protesting the nomination of Brett Kavanaugh in the Supreme Court because we believe that it perpetuates rape culture and sexual violence, especially in higher institutions and we know that those exist here in these institutions; so, we’re just trying to create a safer space for survivors and for everyone in general.”

Protestors stood outside the McKinney Humanities building for hours chanting “hey hey, ho ho, rape apology has got to go,” and “No trump, no KKK, no fascist USA.”

“The whole protest — one today and one yesterday — both of them are really good; they’re both bringing up great points on both sides” Anthony Brito, junior history major, said. “What I hate to see is animosity between both sides of politics. For me, someone who has two female survivors in my life, the demonstration was good.”

Alcoser represented a similar viewpoint. “As a survivor I really don’t think Kavanaugh should be taking a position on rape, especially if he’s had a hearing and we’ve heard someone come out with allegations. It’s really about accountability. If he can be honest about his actions and what happened, then we can look at a space towards restorative justice, but until then, it’s just denial and feeding into the system of patriarchal power.”