Athlete of the Week: Katieann Lochte 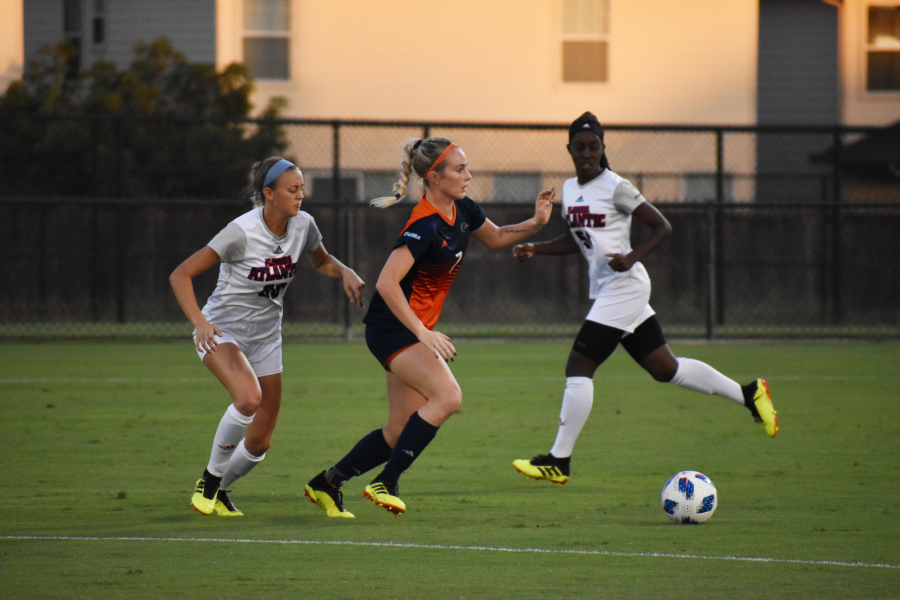 Midfielder Katieann Lochte is this week’s Athlete of the Week. With over 40 games played, seven goals, one assist and over 2,000 minutes played, Lochte has been a leader throughout her career with UTSA soccer, both on and off the field. Even with rough weeks as a student-athlete, Lochte is able to have fun, learn and play her favorite sport through the college process.

The team’s starter always had a love for the game since being introduced to it. Playing since the age of five, Lochte lived, ate and breathed soccer from the get-go. “My mom put me in it and I just fell in love with the game and I didn’t want to stop. I didn’t want to do other sports I literally just wanted to do soccer,” Lochte said.

Lochte was homeschooled in Seguin, Texas. Having a big value on family, she was able to stay close through playing for the soccer team. “I chose UTSA because I wanted to be close to home and saw that this was an opportunity to be part of a building program and I thought that was special. I knew I could help build it and be a part of the legacy.”

Even with workouts, practices, games and extracurriculars, she is able to stay on top of her grades. As a junior multidisciplinary studies major, Lochte has already been on the Conference-USA Commissioner’s Honor Roll in both 2016 and 2017.

Outside of soccer, Lochte has other interests such as: getting into her family’s business in insurance, watching Netflix, napping, making new friends and going outside. When with her team before games, Lochte said “they kind of throw me in along with Olivia [Futch]. It helps get the team going. Other than that, [I] listen to music to get focused.”

When it comes to being a Roadrunner, Lochte takes great pride in the position she is in and the support system that surrounds her. When asked what her favorite part of playing for UTSA, she responded with: “The girls around me, we put so much work into this game and knowing that they have my back, I have theirs and that is the best feeling. So, going out there you’re surrounded by family.” Each member of her extended family means a lot to her and she is happy to be able to interact with them on a daily basis.

As far as the ways soccer as a whole has impacted her, she said: “There are many ways, it has taught me so many lessons and given opportunities like going to school because of it, a lot of friendships and lifelong memories.”

Humble and hungry, Lochte and the team are aiming to make a splash in Conference-USA. Going into this past Sunday, the UTSA soccer team record was 4-6-1 (0-3-1 in C-USA). After playing Marshall on Sunday, they were able to tally their first conference win, shutting them out 2-0 and only allowing Marshall one shot the entire game.

Five games into conference play, the Roadrunners are in the middle of their conference stretch and are looking to climb the ranks and cause an uproar in the standings. In her third season, midfielder Lochte wants to keep contributing and building the UTSA brand as well as the San Antonio community.

UTSA soccer looks to rise the ranks in the conference for a shot at the Conference-USA playoffs. Lochte and the UTSA Roadrunners are back on the pitch Thursday, October 11 to take on Southern Miss on the road at 4 p.m.