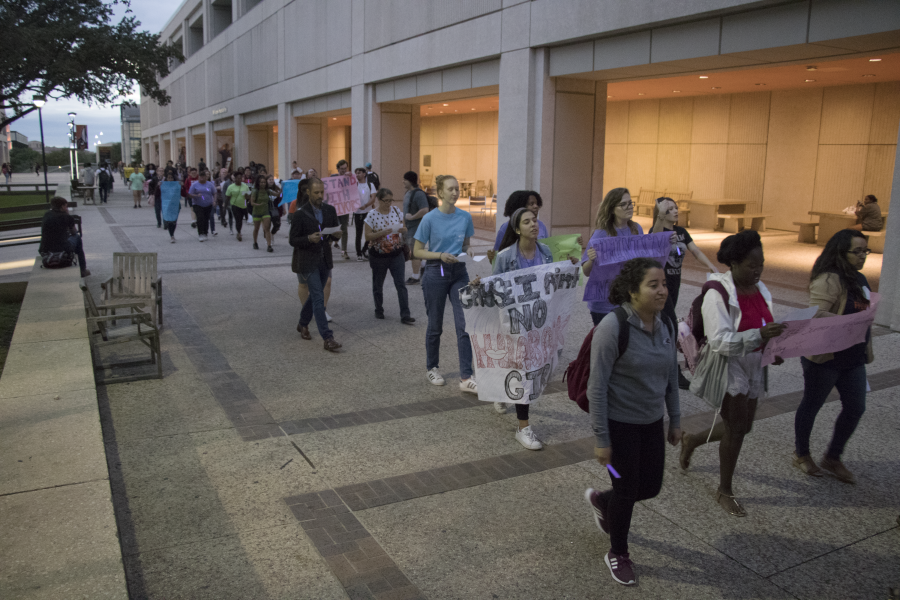 March during "Take back the Night." Renato Lopez / The Paisano

“Take Back the Night” has existed since the ‘70s, when the issue of violence against women became a topic of public conversation after a number of high profile cases garnered media attention. Since then, “Take Back the Night” has become a popular form of protesting the sexual and domestic violence against women in the United States and around the world.

At the beginning of the night, several organizations held a resource fair to provide students with information about domestic violence prevention, and assistance for survivors of domestic and sexual assault. The Student Center for Community Engagement and Inclusion, Women’s Studies Institute (WSI), UTSA PD, UTSA Women in Leadership and the Rape Crisis Center were just a few of the organizations tabling at the event and provided resources for students to become more engaged. Students also participated in poster making; the posters were then used in a march around campus later that night.

“People who walk past us and hear us chanting and protesting will have to take a minute and think about sexual assault and harassment,” said Sophia Anna Gonzalez, head of the Women in Leadership. “Is that an issue they face daily? Is that an issue that their friends face? And that’s going to be something that they can reflect on and realize that this is an issue that students face.”

After Saldivar-Hull’s opening remarks, she welcomed two guest speakers for the night: Chief of UTSA Police Gerald Lewis, and Jessica Munoz, Head of the Office of Student Advocacy and Violence Prevention.

Lewis spoke about UTSA PD’s efforts to make the campus safer, and more inclusive for its students, and opened up personally about his own story.

“I grew up in a home where I was terrorized by my stepfather, who abused my mother physically, sexually and emotionally. I thank God for super-sizing me, because at some point he gave me the ability to protect my mother.”

“I am the Police Chief and we are the Police Department for everyone. I don’t want anyone to ever feel like they can’t come and talk to us about something.”

WSI interns then lead the student march around campus and chanted affirmations like “Women united will never be divided” and “Sexist, rapists, anti-gay, you can’t take our night away!”

The night concluded with testimonials from students who have experienced sexual assault and domestic violence.

For more information and resources that deal with domestic violence and sexual assault please visit the Office of Student Advocacy, Violence Prevention and Empowerment located in the North Paseo Building (NPB 5.130) or contact them at 210-458-4077 and [email protected]