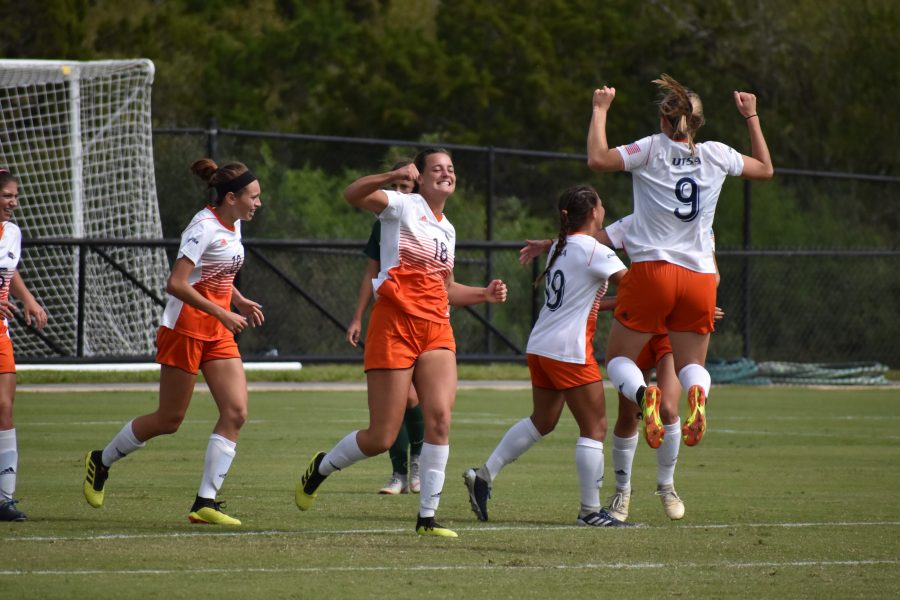 UTSA Soccer split weekend games
The Roadrunners fell to the Old Dominion Monarchs on Thursday, Oct. 18. The final score was 2-0, and the game was located at Park West Athletics Complex.

The ‘Runners began with great possession of the ball in the first half. They attempted to develop their passing lanes which opened up a shot opportunity for UTSA’s Ellis Patterson which ended up in ODU goalkeeper Jasmine Crawley’s hands. The Monarchs answered with their own attacks amongst the wings and the center of the field. UTSA continued to pursue opportunities to move the ball past ODU’s defense.

Jordyn Lacy was supplied a penetrating pass that allowed her to take a shot, but it was stopped by the ODU keeper once more. This opened up ODU’s Carla Morich to take a shot on goal that was effortlessly saved by UTSA goalkeeper Michelle Cole. The possession of the two teams had come to a standstill, until a counterattack from the Monarchs led to Iris Achterhof netting one in making the score 1-0 right before the end of the half.

The second half began with the ‘Runners consolidating their defensive lines to overcome the momentum set forward from the first half concession. ODU mounted an attack which led to another shot from Achterhof and safely kept by Cole. The ‘Runners had a hard time finding space to develop attacks. Old Dominion was awarded a corner kick in the 64th minute of the game.

The kick was taken by the Monarch’s own Talia Tapper, who ended up supplying a well-placed ball that allowed Emily Roberts to head in a goal, bringing the score to 2-0. The ‘Runners regrouped with strategic adjustments trying to rally a comeback. Michelle Cole showed adept play in saving a ball from the Monarch’s Kira Laurento.

Nearing the end of the game, UTSA led an attack mounted by superb passing that led to a shot by Jordyn Lacy, sailing over the crossbar. Michelle Cole ended the game with four saves. Unfortunately, UTSA was only able to take three shots for the entire game.

The Runners tasted victory on Sunday when they took on the Charlotte 49ers on Senior Day. The score was 2-0 shutting out their conference opponent with goals from Marianne Hernandez and Ellis Patterson. Michelle Cole achieved her 5th shut-out of the season in this match and the ‘Runners record on the year is now 6-9-1. UTSA Women’s Soccer will be back in action at Park West to take on the UTEP Miners this Friday, Oct. 26 at 7 p.m.