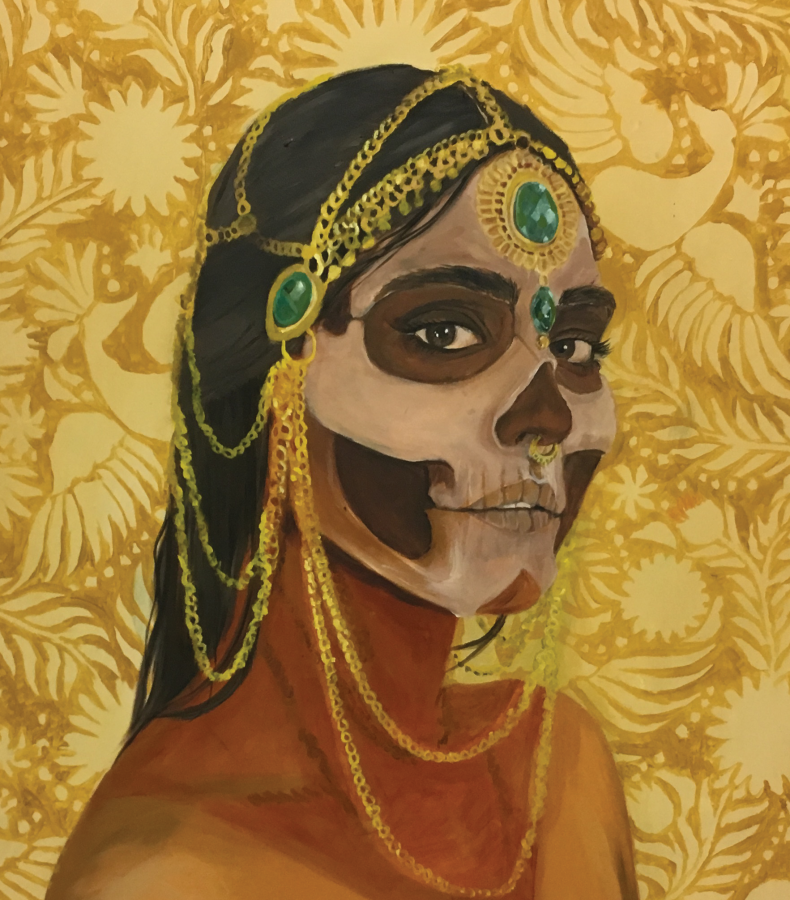 Familiar Faces
The approaching army continues to grow in size before you, as you stand on top your castle wall. They march in unison until their size quickly overwhelms you. As ruler of the kingdom, you know there is nothing your forces can do to defeat the impending total destruction.

A fireball crashes down behind you knocking you down to the floor below. Citizens are hysterically running around attempting to find protection and make sense of this chaos. As you come to your senses, you decide the best way to secure your people’s legacy is to lock away the most precious and distinctive items in hopes to be discovered years — even centuries — later. A thunderous boom resonates from the castle gate as you scramble to your feet and run towards the art gallery.

Native San Antonio artist Michael Esparza was introduced to this story during senior seminar at UTSA presented by Hills Schneider. The tale of the king locking himself away with the kingdom’s art and treasures resonated with Esparza as he was posed the question, “What would be in your room?” Esparza pondered the idea of lineage and how this situation would have affected his ancestors. His Mexican heritage was one inspiration for last Friday’s solo exhibition titled “día de los muertos” at Galería E.V.A.

The concept of time is a major component in Esparza’s artwork. One of his most recognizable series involves iconic road signage of Whataburger, Taco Cabana, Mama Margie’s and Bill Miller’s. The establishments and their signs are isolated in deserts, meadows, countrysides and coasts. Esparza noted, “Mexicans have a custom when starting a business of taking a picture of the building, then through bad photoshop, removing all the surroundings. Above the building, they photoshop a picture of Jesus or the virgin of Guadalupe. Sometimes the owners commission a painting, so it will be the building by itself on a landscape with the religious element on top.” Esparza pays homage to these played-up first establishments with the addition of modern signage that triggers familiar memories of times long ago. This sense of nostalgia was also evoked at Friday’s “día de los muertos” exhibit.

The name is derived from the traditional Mexican celebration of the same name. According to National Geographic, Día de los Muertos is “a typically Latin American custom that combines indigenous Aztec ritual with Catholicism, brought to the region by Spanish conquistadores.”

People celebrate the lives of their ancestors and deceased loved ones with festivities and ofrendas, which can have various foods and drinks such as fruits, mole, atole and Pan de Muertos. Calacas and calaveras (de azúcar), skeletons and sugar skulls, have become a sort of symbol for the holiday with their festive clothing and decorations.

The skull is the focal point of Esparza’s exhibit. Typical Día de los Muertos makeup is where the whole series started for Esparza. “As I began the painting series I wanted the sugar skull to use more makeup used daily than a costume used for a particular holiday,” he said. As he continued his process, Esparza noticed the women’s makeup resembled a mask worn on their faces. Changing the colors around the eyes, nose and cheeks began to “conjure very old memories,” Esparza recalled.

The familiar face staring back reminded Esparza of the Pokémon, Cubone, who wears a bone mask. This similarity sparked the idea of the skull mask worn in “La Santa,” the largest painting of the series. Esparza already had the idea of a king’s court playing around in his head but the connection to Pokémon strengthened it even more. “When [Pokémon] evolved, this create[d] higher variations of the same entity. So different levels, in a royal setting, would be different levels of royalty,” he explained.

Esparza imagines the figure in “La Santa” as the queen of an imaginary land that may have actually existed centuries ago. A skull rests on her head and masks the top portion of her face. Her eyes stare forward commanding attention and her face looks as if she’s waiting for the viewer to speak. Her body is cloaked in emerald green and is crowned with large red roses. Gazing into the painting’s eyes evokes an astonishing and humbling feeling. Esparza explained that the additional eight women featured in the paintings were part of the court or follower who saw the mask’s authoritative quality. He replicated the figures through makeup and decoration as a symbolic fashion-statement.

Each of the nine models is a friend or acquaintance of Esparza’s, and each one is as unique as the individual. The cool, striking stare of “La Santa” is matched by the warm, shimmering glow of the adjacent painting “Alysha.” Her face paint is matched with elaborate head jewelry decorated with emeralds calling back to the cloak of “La Santa.” Some of the women featured wear more ornate head jewelry, while others display abundant rose crowns or no headwear at all.

Each painting’s background varies in design and contrasts the colors each individual displays. For example, “Mary” is dressed in a deep purple dress with a matching rose crown. Her makeup possesses the same shade of purple in place of the black. Periwinkle shapes form a patterned halo behind the figure. The yellow background pattern in “Hope” is reminiscent of a full moon and the figure, whose outfit resembles that of “La Santa,” appears to have crossed into frame and locked eyes with the viewer. The gaze is familiar, yet the face is not.

When Esparza worked at HEB, he would come across shoppers’ discarded shopping lists. “Seeing how [people] formatted the list, bullet points or numbered sentences –  or just one word for each object. Some were a plan for the entire day and not just a stop at the grocery store. I began to collect them,” Esparza recalled.

Soon, Esparza was introduced to a website that featured more lists similar to his, however, these lists included notes from attics, thrift store books or jacket pockets. Esparza knew he wanted to replicate the same joy he found in these notes; something small leading to big changes. Much like grocery lists, art buyers and collectors tell similar stories of their discoveries and how they found the artwork.

They’ll talk of the specific day and gallery and they’ll mention the artist, what the artist said, why they felt compelled to buy the painting, where they chose to hang it, and what other people say about it. Esparza believes that,“the painting will now have its own life, creating its own stories for those who possess it and those who admire it.”