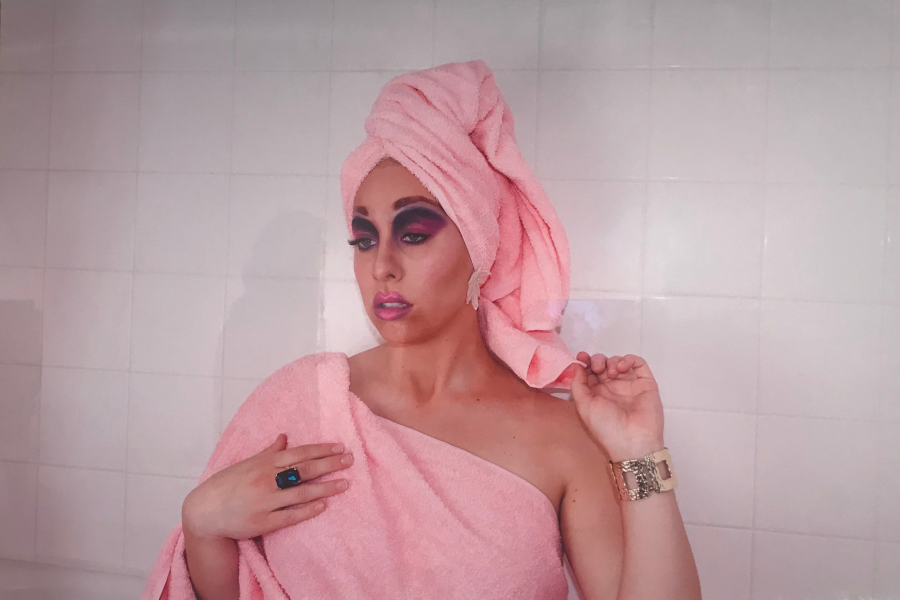 The way we present ourselves to the world is completely our choice, and to appear calm, collected and professional is what many strive to be perceived as on their route to success. But what about the traits we hide from the outside world? The characters who are full of personality just waiting for their time to shine. UTSA graduate student Eden Collins conveys the characters within herself using mixed media in her collection Sometimes I Play With Myself.

Set to graduate this fall, Collins presents her Master of Fine Arts thesis exhibit Sometimes I Play With Myself at Terminal 136 in the Blue Star Arts Complex. The exhibit features photos, videos, installations and sculptures all surrounding the themes of play, delight and the absurd. The collection exudes playful energy, with bright pink hues and butt plugs dangling from strings.

The inspiration for this exhibit has been building since Collins’ childhood. Raised by a doctor and a nurse, Collins was educated and aware of her body and its functions. Collins’ parents had an extensive collection of books, and she and her friends would pour over these books and discuss erections, periods and other bodily functions they were noticing in their early adolescence.


Finding Eden
These experiences throughout her childhood and adolescence led her to think, “Why isn’t this normal? Why isn’t this how life is all the time? It’s not actually that weird, look at how fun this can be,” Collins said. Sometimes I Play With Myself connects themes of sexuality and the characters featured in various pieces within the collection. “The characters are about taking pieces of my personality and exploding them into these individual segmentations but turning them into actual people,” Collins said. In her works, Collins performs as these characters and creates a unique look and persona that is viewed through video, photography or performance. Each character exists in a different world according to Collins.

At Terminal 136, Anita Finger, The Bathtub Drag Queen, is displayed in a metallic iridescent frame on the left wall. The character of the drag queen has a mysterious element to her, as she appears only in photographs. Anita is fabulous and wild but all in the safe confines of her bathroom, “Her whole shtick is that she is in the bathroom, because that’s her stage,” Collins said. Anita is also seen through the life-size dresses created with bathroom towels, titled Anita and Her Pets. The dresses are delicately sewed with a matching towel-wrap head piece in shades of bright pink, coral, teal and yellow, which immediately draw attention upon walking into the exhibit. These dresses are Collins’ personal favorite out of her collection because “It is my childhood fantasy come to life. I would always make those outfits, but I usually used bobby pins, hair ties, twist ties and my mom’s bathrobe,” Collins said.

In video installations, the opera singer takes the stage from the safety of her kitchen. She is never public, is only an opera singer inside her head and allows us to view her through her own lens. The opera singer embodies the part of Collins that “So desperately wants to sing about doing [her] dishes, and serenading [her] pets. The opera singer is the person who just wants so badly to be a star but doesn’t know how. So she’s a star inside her own kitchen, and that’s her stage, that’s where she performs,” Collins explained.

Eden Collins expresses the parts of herself that many of us are afraid to acknowledge or express. This can inspire conversation and potential normalization of these quirky, sexual and loud parts of ourselves. The exhibit will be open at Terminal 136 through Nov. 17. To discover more about Eden Collins and her work, find her on Instagram @edencollins_art.