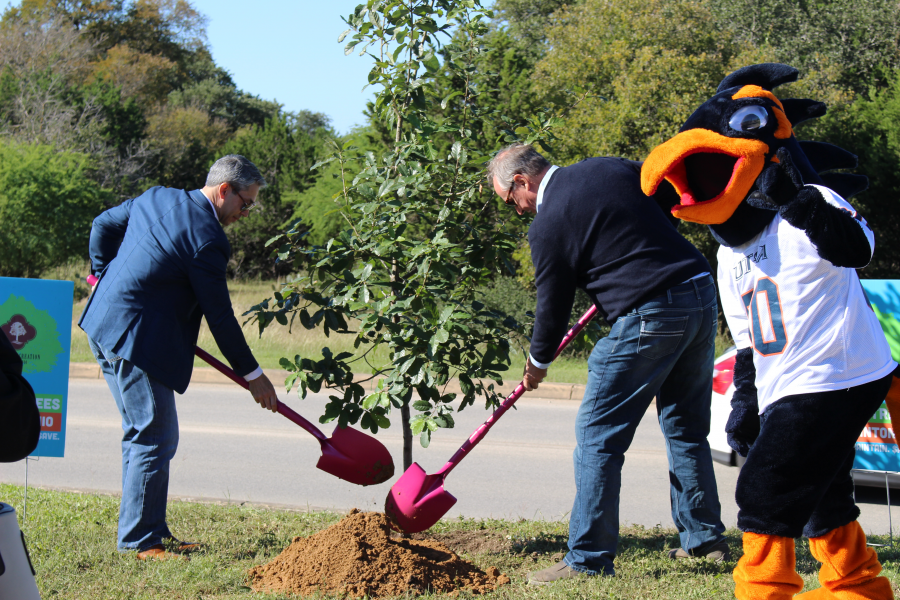 Anyone who loves nature, or enjoys the wonders of science was enthralled when UTSA hosted the official Arbor Day Celebration concurrent with the Monster Mash Pumpkin Smash.

This event was designed by the City of San Antonio, in coordination with UTSA. It was an excellent way to promote awareness of environmental health and the way trees help to rid our air of toxic CO2. As a personal witness to both of these events, I can safely say that it was well worth the time and effort. The UTSA President and I exchanged many great ideas about STEM and the importance of engineering promotion.

President Taylor Eighmy commented that he was a “huge advocate for STEM learning. We need more men and women doing these practices. It’s an excellent example of hands on learning.”

STEM has historically been underrepresented in the female population. Women are only 40 percent of STEM doctoral degree earners. The path of the 21st century is not just for one race, ethnicity or gender and organizations like the National Women in Physics Association proudly assembled themselves for the event. Not only do women need to be shown that STEM is open for them, they also need to be shown that women in STEM are not alone.

The event caused some to reflect on experiments they conducted as a child. One individual attending the event remarked that he “did similar stuff in elementary school. How I see it is that it brings an audience to the hobby side of engineering. It’s mainly mechanical engineers.”

The contraption that launched the pumpkins was a catapult that didn’t use any type of motor or electric propulsion. Not only were there engineering majors, but plenty of physics majors as well. An attraction like this falls under the category of civil engineering, which would involve construction projects, theme park attractions and dams.

Students were in awe at the event as pumpkins flew over the east campus lot. I can personally attest to seeing one pumpkin soar more than a hundred feet upward and land on the other end of the lot where the tree lines were.

For those who had conservation, not projectiles, in mind, the Arbor Day tree adoption was a wonderful complement. Students were able to line up and obtain their very own tree. This tree would be brought home to be taken care of, and would be officially signed to your name. This was a great way to help students appreciate the way greenspace is cultivated, and show that individuals can change their environment.

The group has had a wide space of success, when asked them about their message and their success.

They’ve “planted 10,000 trees at more than 40 events.” An event such as this is not an overt spectacle like a pumpkin catapult smash, but what the Parks and Recreation Department of San Antonio have been doing is a very noble goal that has a positive impact on their environment and air quality. Reports by the Nature Conservancy have shown that trees protect against heat waves in Texas. They “cool the air by casting shade and releasing water vapor.” It’s also said that the leaves can filter out “fine particulate matter.”

These unique events both involved a positive contribution but were done in different forms. The Pumpkin Smash allowed for the promotion of science and the promotion of underrepresented groups within while the Arbor Day tree adoption was a way of promoting environmental cleanliness.

A person alive today may live in one of the most prosperous times, but that doesn’t mean we can’t do better. Situations like climate change, inequality in social sectors and our own human ignorance all call for one to rise to the occasion. According to Science Daily, you are emitting “20 metric tons” of carbon dioxide emissions on average.  A mindset of complicity is never appropriate, if one cares about their home and their life. You can’t say you care about the future if you entrench yourself in the present.