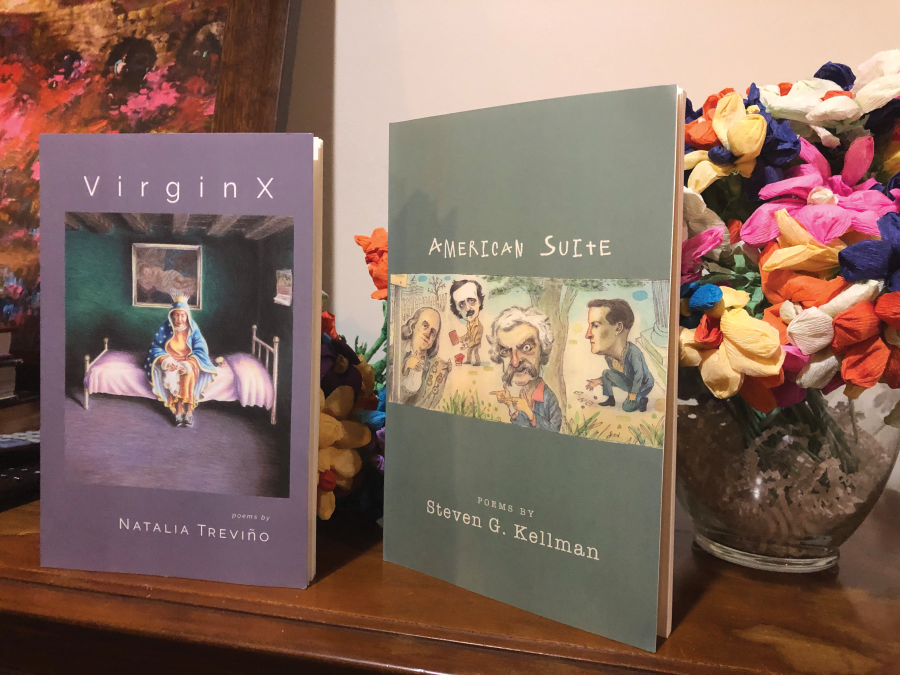 UTSA Professor Wendy Barker, Ph.D., started the night with a warm introduction and expressed how thankful she was for everyone in attendance. “We need each other and we need poetry,” she stated regarding the events occurring in today’s world.

Introducing Treviño, Barker began, “I’ve known Natalia since the 1980s when she was an eager, outstanding undergrad at UTSA and later in the ‘90s as a brilliant M.A. student. But since those years long ago, Natalia has become far more than a literary daughter. I count her as one of my most beloved friends — a precious sister in poetry and in life.”

Treviño was born in Mexico City and became a naturalized citizen at the age of 15. She received her M.F.A. at the University of Nebraska and has received numerous awards such as the Alfredo Moral de Cisneros award. Treviño is an associate professor at Northwest Vista College and has published fiction, poetry, numerous anthologies and journals.

“Virginx” explores the Virgin Mary and the Feminine Divine — the journey of this poetry collection began on Facebook with an image of a drawing of the Virgin Mary. The image she saw is also featured on the cover of “Virginx” titled “Por Las Tardes le Gusta Bordar” by California artist J. Michael Walker.

“I was sobbing and I didn’t understand why. I tried to figure it out, and I knew it had something to do with my own “great mother,” my grandmother Maria de Socorro,” Treviño said.

To Treviño, the image represented the divinity in all mothers, and the act of creation that is in all women. The religious and secular worlds unite in one space and with that unity, Treviño was able to explore the divinity we see within one another.

In her poem titled “I. Infinite Migrant,” Treviño explores the Virgin Mary’s image, with heavy imagery questioning her importance and fulfilling an almost childlike curiosity. The poem is the first part of a series titled “Our Lady of San Juan del Valle/San Juan de Los Lagos, Depending On Which Side of The Border You Believe In.”

Another poem that comes from the series titled “III. Migrating La Virgen,” Treviño places the reader in the place of an immigrant crossing the border while praying to the Lady of San Juan de los Lagos. It is read as a conversation, asking for the blessed mother’s guidance as they make the journey across the Rio Grande Valley.

After Treviño concluded her readings, Barker began her introduction to Kellman and his collection of poetry titled “American Suite.” “For most of you, he needs no introduction. To call Steve prolific wouldn’t begin to do justice to his publishing record,” she said.

Kellman has published and edited 18 books including his much praised biography “Redemption: The Life of Henry Roth” and has many honors such as the New York Society Library Award for Biography. He has served on the National Book Critics Circle on the board of directors for four terms and served as vice president for six years. Kellman has taught comparative literature at UTSA since 1976.

David Kirby describes “American Suite” as “the love child of Ogden Nash and your American Lit survey professor. A witty rollicker of a guide to everything you missed out on as you snoozed through class.”

Kellman suggested to the audience that the book be called “American Sour” instead and before reading, permitted the audience to groan. “American Suite” is an attempted raw take on the history of American literature which focuses on literary figures such as Benjamin Franklin, Phyllis Wheatley, Philip Roth and other contemporaries.

Those more familiar with American literature would find this collection hilarious. In his poem titled “The Great Gatsby,” Kellman writes about F. Scott Fitzgerald’s James Gatz pining for the mysterious green light on the dock but doesn’t realize the light has changed. Like this poem, the rest of the collection are short written verses with funny takes on different authors and their works.

Another poem titled “The Roads All Taken” is a take on Robert Frost’s poem “The Road Not Taken.” Instead of taking the road less traveled by, the narrator takes both — which explains why “there are no more roads left in the yellow wood.”

After many laughs from the audience, the night ended with a final thanks to both authors for their contributions to poetry.

If you would like to purchase “Virginx” or “American Suite,” please visit Finishing Line Press’ website, https://www.finishinglinepress.com/. Be on the lookout for more work coming from Kellman, he is publishing three more books in 2019!