Athlete of the Week: King Newton 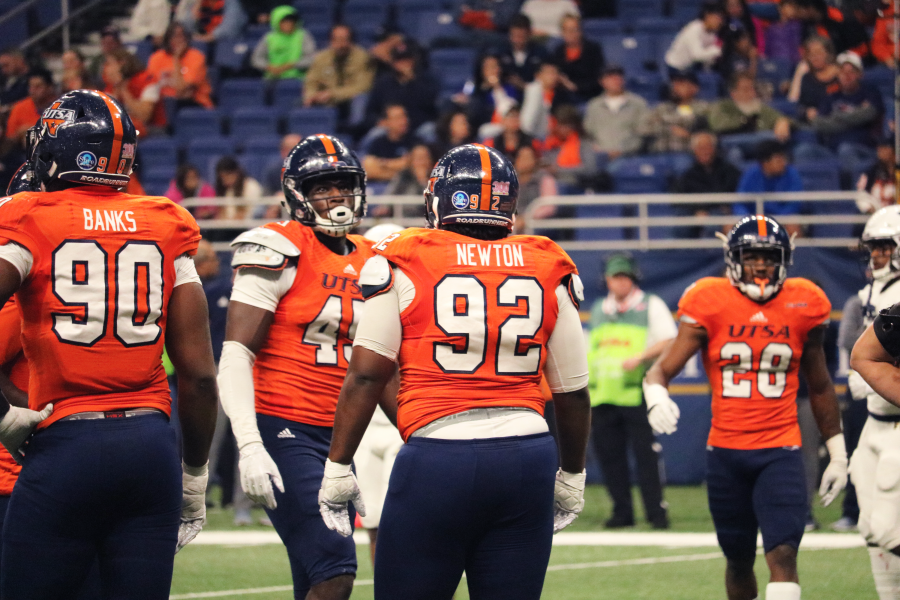 King Newton looking regrouping with his defensive unit before a play.

Since coming onto the scene in 2015, King Newton has been a key member of a very talented UTSA defensive line. Coming out of high school, the former Southlake Carroll Dragon was named to the 2014 Dave Campbell’s Texas High School Football Top 300 List. He also was named District 7-6A Defensive Most Valuable Player along with honorable mentions as all-state and first team all-area player.

Football has always played a big role in Newton’s life. Growing up, he was able to see his father Nate Newton win three championships as an offensive lineman with the Dallas Cowboys. His older brother Tre Newton was a three-peat champion running back in high school and went on to play at the University of Texas at Austin. King Newton has always had the hunger to be a playmaker, on choosing to become a defensive lineman he enjoys making plays and causing havoc. Newton has played football since peewee and was a ball boy for his brother in high school.

“I grew up in football, I don’t remember a time I didn’t play,” Newton said. “I think my first steps were on a football field.”

A Conference USA Commissioner’s Honor Roll member in 2015, Newton has always  taken pride in his academics as well as his hobbies. A double major in cybersecurity and international business, Newton is weighing his options for a post-football life. Whenever Newton gets some free time from football and academics, he likes to produce beats as well. After graduating from UTSA, he plans to get some internships to decide which one he wants to do. As of right now, it looks like cybersecurity is the route he wants to take.

“It’s been great. I feel like every year it gets better. I got one more year and it’s gonna be the best one yet,” Newton said. “I love it, UTSA is a great place. The coaches here give you a lot of chances to show who you are, they say if you want to make a play, go out there and do it. A great campus and a great city.”

“[For pregame rituals] my brother wore the same shirt in every game. That stuck with me, I like to wear the same undershirt and same gear. I don’t like switching up my gear.”

“Football gives me a purpose and it’s taught me a bunch of things outside of football,” Newton said. “I feel like I have one of the best work ethics just because football has taught me that. Waking up early every morning, not getting bored, improving yourself, that’s taught me a lot.”

When it comes to his motivation for the rest of this season, he says his number one motivation for this last game is number 54, Kevin Strong. He has played with him since he was a freshman. The two of them want to finish strong and help send the seniors off the right way.

“Growing up I always had the best coaching,” Newton said. “[My father] showed me some techniques to dominate. He really allowed me to just do what I want to do and grow as my own person.”

Understanding the importance of family, Newton and the rest of the returning players wish to send the senior class off on a positive note for their last game as Roadrunners.